From Uncyclopedia, the content-free encyclopedia
< User:Sonic80
Jump to navigation Jump to search 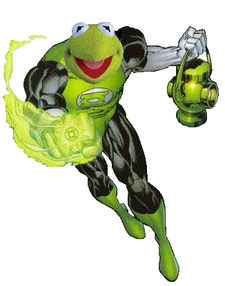 Mr. the Frog, just before the Muppet Show.

“And lo, it is true that the Green people have been victimizing the Black people far too long. Let us now take their farms!”

~ Robert Mugabe on Kermit the Frog

At three years old, Kermiticus III and his good friend, Gonzwalder Fernando Greblink had decided that they wanted to see all that the great land of America had to offer. And on March 29th, 1924 they left their families and the small town in Mississippi behind forever. Kermiticus III and Gonzwalder met a young lady by the name of Geraldine Elaine Pigsmith, in their travels who decided she would leave her abusive family behind to be with Kermiticus III[1].

In just four months the trio made their way all the way across the country into the fabulous world of Hollywood. It was here that Kermiticus III, Gonzwalder, and Geraldine began their historic careers, as some of the greatest child actors that the world had ever seen. Shortly after arriving in Hollywood, the trio met an upper class child actor, whose parents owned a large movie company in Hollywood. Fozzie Eric Bearman introduced them to his parents, who believed that they would be perfect for the role of unnamed child 1, 2, and 3, in their new movie. The casting of the trio forced them to get their own Hollywood stage names. Kermiticus picked up the name Kermit the Frog, for his distinct green color gave off the idea that he was a frog. Gonzwalder decided that he would become Gonzo, no last name, just Gonzo. As for Geraldine, she went the opposite direction, going for Ms. Piggy[2][3].

Kermit playing unnamed child 2 in Santa Claus Goes to the Electric Chair, being yelled at by Sando Klaos.

Bearman's parents cast Kermit for the part of Unnamed Child 2 in their hit movie, Santa Claus Goes to the Electric Chair, which became a box-office hit after its premiere in May of 1925. Unnamed Child 2's story was that he was kidnapped by Santa Claus's evil twin brother, Sando Klaos, and is forced to do numerous crimes, which would then be blamed on Santa.

The movie became one of Hollywood's greatest hits of the time, and Kermit, Gonzo, and Miss Piggy became internationally known as the best child actors of the 1920s. Kermit, Gonzo and Miss Piggy followed up Santa Claus Goes to the Electric Chair with three follow ups, each progressively worse. Santa Claus 2: Sando's Revenge topped the box office in 1927, but didn't make nearly as much money as the original did, and Santa Claus 3: Elves on Strike didn't even make the top 10[4]. In 1931, Bearman's parents gave the child actors one last shot, casting them as the elves in the prequel to Santa Claus Goes to the Electric Chair, Birth of Sando. This was the biggest blunder of the Bearman Family Movie Company.

With the failure of Birth of Sando, Bearman Family Movie Company went bankrupt, Mr. and Mrs. Bearman turned the three 11 year olds out onto the streets, along with their own son, 13 year old Fozzie. With no where to go, and the great depression setting in, Kermit brought his new friends back to Mississippi where he hoped he would be welcome. Seeking out his family proved to be a daunting task. With little food and water to share between the four of them, they had to take turns eating very small bits.

Finally on September 22nd, 1933, Kermit and his friends made it to his home. Bad news struck immediately, when Kermit's childhood neighbor, Dr. Bunsen Honeydew, announced to the 12 year old child, that his parents had died a few days prior to their return, and that the funeral would be held one week later. Dr. Honeydew took the young children into his home for the time, until they were able to leave.

September 28th, 1933 was perhaps the darkest day in Kermit's life, watching as the casket carriers brought his deceased parents to the graves where they would be laid to rest for eternity. His, and Gonzo's eyes drenched with tears, and Fozzie, and Miss Piggy comforting them, swore that he would avenge his parents death, whatever the cause may have been. 8 years later it was determined that Mr. and Mrs. Frogvilder had died of old age.

With his life spiraling downward in a hundred different directions, the 13 year old Kermit decided to leave his friends behind and join the local military academy, where he learned the ways of the American army, and how to take a life. Kermit had very few friends, because of his freakish green skin. Kermit kept to himself throughout his years in military school, often opting out of the over-zealous male-spooning sessions that occurred throughout the nights.

In december of 1941, just after the tragic Pearl Harbor incident occurred, the 20 year old Kermit was shipped out into the pacific theater war-front to fight against the demonic japanese bastards that threatened the freedom of America.

Following World War 2, Kermit's life was quickly going down the crapper. With no military pension, he found himself poor, and an alcoholic, doing anything just to get enough money to drink his nights away. Kermit found himself in his worst state ever, a homeless drunk, committing small crimes to get paid. On December 23rd, 1946, Kermit attempted to rob a local old, rich man, in hopes of getting his life back in order. Kermit was found the next morning, being chewed up by the old man's rottweilers and called the police. Kermit was incarcerated early Christmas morning.

Kermit spent 3 years in the Mississippi State Correctional Facility, until finally on August 31st, 1949, when Kermit was released into rehab. Kermit spent all of 11 minutes sitting through rehab, until he couldn't take it any more and murdered his sponsor in cold blood, and then fleeing Mississippi forever. 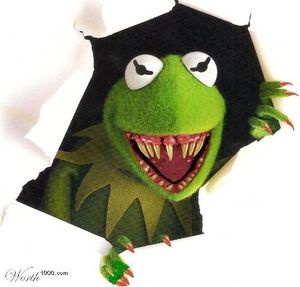 Kermit after his first kill

With his first murder on his hands, Kermit found sick joy in the screams of dying people. It was finally his time to get back at all the little bastards that laughed at him and did all they could to avoid him on a regular basis when he was a kid. Kermit devised his hit-list based on who he hated the most, and who deserved to die the most at top, and everyone else was scattered in the middle. Kermit ditched his old Hollywood name for one that fit his role as a mindless psychopathic killer better. After a few hours of brainstorms, he came up with one that he would never forget. Kermit reverted his name back to Kermiticus, Kermiticus John to be exact.

Kermiticus John was ruthless. He would torment his victims mercilessly for hours before finally killing them. Charles Smith, Kermiticus' only survivor recalled the vivid images from his mind in a 2001 documentary about the incident[5]. Kermiticus John killed over 21 people over the course of 14 months, each in a gruesome, twisted, disturbing fashion. This blood-fest lasted just up until Kermiticus John had killed his pre-school teacher, Miss Mitchell[6], when the police showed up in that North Dakota home and arrested Kermiticus John. Thus ending the Kermiticus John Era forever.

Following his arrest in 1951 in that North Dakota home, Kermiticus John faced death row at long last. The twisted mind of Kermiticus John was finally to be put to death. Kermiticus John did not fear the imminent death, he believed that it would finally release him from his mortal body, onto the afterlife, where he may spend an eternity slaying people in heaven[7]. Kermiticus John picked up an inherently insanity-inspiring talent while on death row. He learned how to play the guitar. 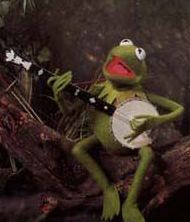 A rare photo of Kermiticus John while still in his jail cell, mastering his guitar skills.

Kermiticus John's execution date was growing ever closer, and his guitar-playing skills had not increased at all in the time. Kermiticus John diligently awaited the date when something he had not forseen occurred. The president at the time, Dwight D. Eisenhower acquitted Kermiticus John for everything he had done. Apparently president Eisenhower was a tremendous fan of the Santa Claus Goes to the Electric Chair series when he was a child.

This shocking turn of events startled Kermiticus John and all of America. This was widely reknowned as one of Eisenhower's worst possible moves. He had just released what would soon become the most hated washed up actor that the United States had ever seen. Nobody wanted to have Kermit the Frog return to the spot light, he deserved to be dead, so no more Santa Claus movies could come to fruition.

Following the acquitment, Kermiticus John ditched his new name and went back to his 1920s stage name, Kermit the Frog. As everyone had feared, he wanted to take up acting again. Kermit met up with his old friend Fozzie Eric Bearman, in hopes of rebuilding his career, unfortunately Fozzie's parents weren't all that interested in having an ex-convict in their movies. However Fozzie did agree to help Kermit seek out a manager. 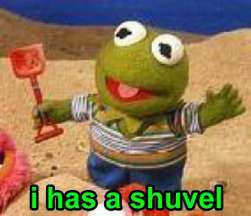 Kermit Jr. who, despite popular belief, does in fact have a shuvel

In 1966, Kermit was given a huge surprise from his wife, Miss Piggy. 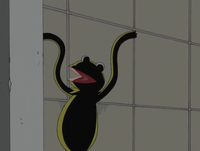 A scene from the 1989 adaption of "Its not Easy Being Green"'s music video.

Carrying on the Legacy[edit]

[ ]
☼ The Axis of Evil-Doers ☼
Retrieved from "http://en.uncyclopedia.co/w/index.php?title=User:Sonic80/Kermit_The_Frog&oldid=5232930"
Categories: