From Uncyclopedia, the content-free encyclopedia
(Redirected from Toasters)
Jump to navigation Jump to search

A toaster is a small land crustacean. It is generally shiny and box-like, although this can vary from species to species. The toaster has an aluminum exoskeleton with up to four slots that make up the mouth; protruding from the outer shell is a lever that is pushed down to consume prey. Also present is a dial determining how much of the prey is to be consumed, or in layspeak, "toasted." The toaster's natural habitat ranges from deciduous to evergreen forests. A ferocious predator, toasters have nevertheless been domesticated extensively by humans of nearly all walks of life.[1]

On the evolutionary tree, toasters are very closely related to other appliances, especially microwaves. Toaster ovens are not as close to "true" toasters as you might think, but nonetheless share much of the same DNA. Also related to toasters are appliances such as refrigerators and stoves. Toasters are ferocious predators, and are hunted only by the occasional dire wolf, and of course, man. The prey of a toaster may include but is not limited to sliced bread, loafed bread, bagels, waffles, Pop-Tarts, pancakes, English muffins[2], and occasionally paper money and a few fingers if it's feeling truly peckish.

In the mesozoic era, toasters ruled the earth, but were mainly restricted to a two-block area of the Lower East Side due to rent-control. These prehistoric hunting machines, called Tyrannotoasterus (Tyrant toaster), used brawn, stealth, and small concealable pistols (also known as "Saturday Night Specials") to take down their massive prey. The toasters of millennia past were huge, flying, radioactive machines[3]. Fossil evidence excavated from beneath Microsoft headquarters in Redmond, Washington, USA has definitively proven their existence outside of Lower Manhattan, at least in winged form, since 1992 A.D. Toasteropaleontology is the branch of science dedicated to the study of these majestic appliances. Currently, the great debate in the toasteropaleontologist community is whether toasters used Alternating Current, Direct Current, or possibly both. 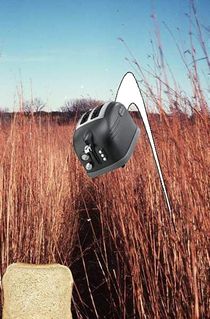 The toaster is a ferocious predator, employing the "sneak-up-and-pounce" technique to great effect. The unfortunate slice of bread doesn't stand a chance.

In the early 19th century, toasters were still a mystery to mankind. In 1823, George Washington Carver set out on an expedition to the California redwoods to study toasters. Over a period of ten years, Carver studied the eating habits of toasters.

Toasters have been found to prey on small flocks, or "loaves" of bread, usually targeting the smaller, weaker of the loaf. Toasters have been known to prey on other species, such as bagels and Pop Tarts, as well. When a toaster first spots prey, it will immediately drop into a crouch[4] and stalk the unfortunate bread slice until it stops to drink or eat, usually at a cheap diner or greasy spoon. The toaster pounces at once, crushing the hapless slice. The bread immediately will struggle violently, often throwing off a less determined toaster and escaping. In order to subdue the bucking prey, a toaster will use its poisonous plug at the end of its cord, or tail, to stab the prey into submission. However, the electrical surge often takes nearly thirty seconds to take effect, and an off guard toaster can be hurled away and seriously damaged before its prey is fully subdued. Once the bread slice has stopped thrashing, the toaster will use its cord to drop it into one of its slots. Then something occurs that continues to befuddle scientists today. As the toaster consumes its prey, it will become excited and produce an electric reaction, called "heat." This amazing reaction is called toasting. After forever, the newly toasted toast is regurgitated out of the top at high speeds as waste or a meal for juvenile toasters. As the prey is "finished off", it gets shot out of the top at an amazing speed into the air. 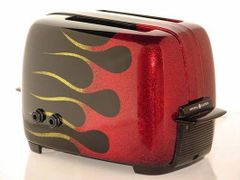 There comes a time in every toaster's life when it will feel the need to reproduce, to start a family. First he will seek out a prospective mate, which can usually be found at singles bars. If a suitable mate can be found and if the male is not rejected at first sight he will begin an elaborate courtship dance. This dance consists of seven parts, three of which are too vulgar and/or disturbing to be included in this article. In the first part, the male will capture a piece of prey. Uncommon preys, such as waffles or bagels, are valued more to females than common preys like bread. The prey that has been captured must be alive. Second, he must offer the prey up unto his mate. The third part gets into the actual dancing. Dance moves can vary from the electric slide to a tango. Fandango dances are prized among females. The female will often join in, and, taking the prey from the male, will not toast, but blacken it, in a flurry of excitement. Once the male has sufficiently wooed his mate, they will retire to a secluded area to, ahem, procreate. Sometimes during this labor of love, the female will rip off the head of the male, but only if he's really good. 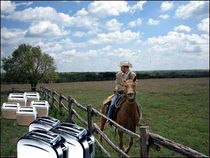 Toasters now come primarily from ranches, like this one pictured here.

Man and toasters have had a long and illustrious history, often near-symbiotic creatures, each depending on each other for survival. The first ever domestication of a toaster occurred in Ancient Rome, where on a mosaic in Pompeii there is shown a man and his pet toaster. As the industrial revolution brought about the destruction of many habitats of different animals, the toaster habitat one of them. Toasters dwindled in the wild, until there were no more left. However, toasters were saved from extinction by an Englishman named Theodore Seuss Geisel, who preferred toast in the morning with the butter side down. An enterprising man, Geisel saw the potential in the toaster as livestock. He quickly set up a toaster ranching empire. This not only saved toasters from utter doom, but humans of all walks of life could now own a loving pet.[5] Toaster ranches were a lucrative way to make money, and in the frontiers of America from 1800 to 1850 self-styled toasterboys tamed the ole' west. Now, toasters are raised in Texas alone, which makes it its chief export. Movie directors saw the glory in that old way of life, and "toaster westerns" make up a principal part of American culture. However, with the release of The Brave Little Toaster, it all went downhill.

Toasters are somewhat hard to confine keep in captivity. Numerous circuses, zoos, and teacher lounges have had an instance of a runaway toaster. One of the more famous incidents involved all three places at once. A traveling circus was visiting a zoo, along with a teacher and her lounge in the year 1927.[6] A toaster that was being forced to jump through a hoop saw another toaster of the opposite gender (quite a looker, too, as toasters go) inside the zoo cage, and well, you know. The zoo had to be closed for six months, the circus went bankrupt, and the teacher was given a quiet funeral in a private ceremony at Hidden Hollows cemetery. 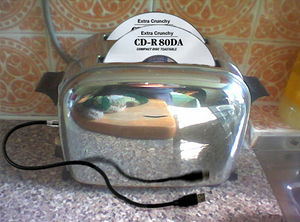 Some toasters also comes with the ability to burn CD-R and DVD-R and to be connected by USB 2.0.