A little elemental demon (LED) is actually a bit of a misnomer. The light-producing property of LEDs is not a complete demon but only a partial manifestation of its nature.

An LED is the spawn of a Christmas light. Christmas lights will come out of hibernation during mid-December to be forcefully placed upon a pine tree to act as a decoration. During the time of decoration, the common Christmas light will become extremely horny and as a result produce up to 7000 spawn in order to keep the species going. Later on in the Christmas period, the male of the Christmas light will attempt to fertilize the eggs with almost a watt of electricity. When the spawn eventually develop and hatch, the term LED is used. Unfortunately, these stories do not have a happy ending, as the LED trade is at an all time high. People come from far and wide to retrieve these baby Christmas lights.

Techno-Trade are the worst offenders and can take up to 45% of the LEDs at once. They are then neutered to stop the production of testosterone, thus preventing pubertal development and leaving one of their wire legs shortened. After this, they are packed into boxes of 20 and sold. Fortunately, these containment units or "20 LED Multibuy Bargain Packs" are poorly constructed and are broken open and rescued by secretly smuggling them out of the facility (the other view of this act is chavs pocketing them and scampering out so that they can light their rooms in red for about 20 seconds).

The people who work with abandoned LEDs are known as electricians; they will bribe shops like Techno-Trade to purchase the containment units for the low sum of 25 pence and put the LEDs to good use, where they will be appreciated such as in electric circuits to let someone know that their appliance is switched on. It's hard and boring work, but it's better than being stolen by a chav to prove he is ranked above a dog in intelligence. The LED Rights committee put forward that forcing LEDs into a circuit and making them stay illuminated for extreme lengths of time is slave labour and are currently working to allow these LEDs to be set free to run about the wild and continue to live in peace and harmony.

The Famous Incident in 1205 - how LEDs Saved Christmas[edit] 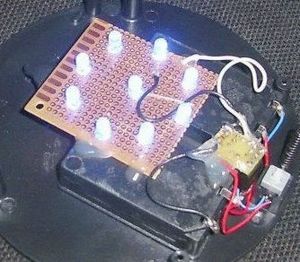 A small family of LEDs enjoying a roast dinner.

Rudolph the Reindeer was an employee in an LED factory. Unfortunately, due to a small programing error involving Windows, an explosion fired millions of LEDs into all directions. One LED hit Rudolf square in the nose. Some of the energy in his body was somehow converted into electrical energy . Being an adventurous young chap Rudolph - who was now known as the "Red-Nosed Reindeer" - set sail to the North Pole where he went to Grotto University. However, being a FREAK OF NATURE, he was rejected by the other reindeer and was not allowed to play any reindeer games, such as Monopoly: Reindeer Edition. Then, one foggy Christmas Eve, Santa, slave master of the reindeer, came to say "Rudolph, with your nose so freakishly deformed and bright due to the fact that you have a LED implanted in the schnauzer, won't you join my sleigh tonight?" Rudolph was then admired by all, and now, all reindeer have LEDs implanted in the nose.

If one examines an LED closely, one can see a tiny metallic icon embedded in the plastic. If five of these icons were linked to form a pentangle, they would call up a full-fledged demonic presence...with disastrous consequences! Early experimenters very quickly learned never to construct a full LED pentangle (see hurt real bad).

Elemental demons of different kinds produce different colors when called into partial manifestation. The most common are fire elementals, which give red light and were used in the first successful LEDs. Yellow light is produced by flatulence-demons, green by demonic spirits of absinthe or menthol, and white by the difficult-to-invoke aetherial spirits. 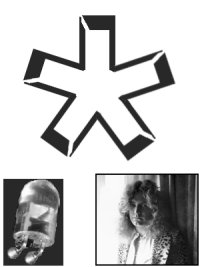 A common misconception about LEDs is that the color is produced by the demon-resistant plastic in which the magical icon is embedded. It isn't. The plastic is colored, though in Britain it is coloured instead, but the demonic manifestation itself produces light of a characteristic color. Another misconception is confusion of the slang term diode with LED. "Diode" is a mispronunciation of the word "dude" as in "Dude, your LED didn't light up!" Early experimenters tried making LEDs of silicon or germanium, substances which called up the demons of mud and politics, respectively. These demons do not produce light but they do affect the flow of electricity. "Diodes" are now commonly used in electronic circuits and in fact made the magical devices known as transistors possible.