From Uncyclopedia, the content-free encyclopedia
(Redirected from Cylon)
Jump to navigation Jump to search
Whoops! Maybe you were looking for the equally mercurial 20th Century act Simon and Garfunkel? 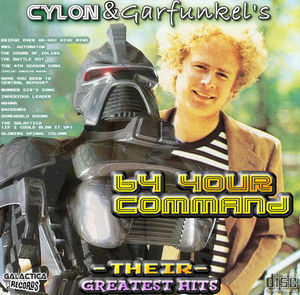 By Your Command: Their Greatest Hits, 7275

The two formed the legendary group “Automatom & Jerry” in 6848, and passed virtually unknown for the greater part of their career, working street corners. For years, they played songs denouncing war for any passerby who would consider a donation, before finally hitting it big with their first outing, “Hey Skin-Job”, an upbeat number that, according to Cylon, was written to bring attention to the plight of transorganics, synthetic beings who, owing to a defect in their logic circuits, had had their chassis and interface devices specially fitted to resemble human bodies. As a young Centurion in the Cylon fleet, Cylon was quoted in a later interview, many such “trannies” had come to confide in him, their superior officer, their deepest worries and insecurities.

After decades of inactivity, a brief period of them being lost in long-term storage, and with this recording success behind them,
“Automatom and Jerry” felt comfortable enough to officially change their stage name to the current and more familiar “Cylon & Garfunkel”, a daring move considering the state of Human-Cylon relations in the Colonies was tenuous at best, and such highly taboo human-android pairings were often subject to petulant, if not entirely violent, persecution.

Thusly rebranded, the duo was once more space-catapulted from obscurity in 7248, backed by their hit feel-good single, "The Sound of Idling": 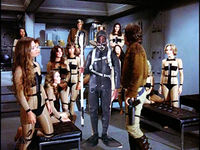 The infamous "pressure suit" scene from The First Orbit Cadet, 7250

During one of their famous Concerts In The Park, Cylon resurrected an old hit in the form of an improvised “Hey Skin-Job”, and in sampling from the old Navy ditty “Deck Fraks”, managed to garner approval from among the ranks of the previously tentative Colonial military. In fact, their enduring popularity was forever cemented into the collective memory when their music was featured in the landmark film The First Orbit Cadet, a blockbuster holovid that centered about a neurotic Flight Sergeant as he attempted to lose his virginity to a ship full of shapely female shuttle pilots, following a reassignment back to his old ship after an unsatisfying tour of duty. The picture was a sales hit as well as a critical darling, and in no time at all earned the laud “instant classic”, whilst becoming a standby among the Academy’s Core Faculty for showing just prior to graduations.

The band’s popularity peaked with the 7253 release of “Have You Been To Central Repair?”, which was far and away their best selling single.

Unfortunately, interstellar recognition and unchecked drug use began to take its toll on the two, and the first major disagreements erupted shortly afterward. Never forgetting the activist roots of the group, Garfunkel argued that they should continue to cater to their core demographic, the financially bankrupt, politically liberal, substance reliant young adults who had constituted their most loyal fan following. Galactica Records, the studio that had signed the pair in the first place, instead wanted to further capitalize on their newfound fame on the Battlestars by commissioning a whole series of patriotic songs about beating back the synthetic threat. Cylon dismissed both ideas offhand, arguing that what the listeners really wanted was a whole New Wave of music from the Machine point of view. The record company disagreed, citing data that showed historically low Cylon buy-in, owing, they believed, to the fact that Cylons were physically incapable of appreciating music;
the functionality had never been installed. 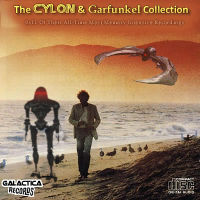 Furious, Cylon left the building in a petulant huff of overheat-fueled psychotic rage, effectively breaking up the group while also leaving a trail of dozens of mangled human bodies in his wake. According to reliable sources, an emotionally distraught Garfunkel, by contrast, spent weeks locked in his apartment, rocking back and forth in a fetal position, uttering nonsense songs whose subject matter entailed, among other things, world peace, social ignorance, and the enumeration of a variety of culinary herbs.

By the time Garfunkel had released his 8th album entitled Friendship in 7267, Cylon was an acknowledged solo artist who had only recently fallen out of favor after having released a series of anthology albums of Cylon folk songs, ending with the bitter Homeworld Bound, whose titular power ballad included a noteworthy (and some critics would argue, gruesomely excessive) number of references to what the liner notes called “the unimaginable joy one always derives from the methodical termination of organics”. Penniless and wistful for the days of their breakout success, both Cylon and Garfunkel happily consented to a reunion brokered by their old talent agent in 7269, whereupon they merged all of their individual hits into one massive catalogue, to nearly universal acclaim. Bridge Over Ad-Hoc Hive Mind, the first of a planned series of reconciliation albums was to be the newly reunited group’s first release.

Disaster struck twice, however, in 7270 when just days before the slated release of Hive Mind, an argument erupted over what was to be the album’s bonus track. Garfunkel nixed Cylon’s angsty freestyle rap “If I Could Blow It Up (The Galactica)” while Cylon flat out rejected "Adama", Garfunkel’s strange, vaguely homoerotic attempt at a love song dedicated to that same ship’s highly decorated commander. Needless to say, rumors swirled about after Hive Mind’s astonishing postponement. Following a ridiculous series of delays, Garfunkel called a press conference and confirmed publicly what many had already concluded privately: Hive Mind had officially been canceled, and Cylon was nowhere to be found, having secretly taken a vacation, supposedly to go on a human killing safari. After a sustained bout of crying, Garfunkel embarked on his own soul-searching sojourn to Sri Lanka where he hunted for exotic tea leaves and cinnamon to round out his pantry, in time finding himself installed as the popular, reedy-voiced leader of that country's civil war, a period documented in the cult-classic 7273 biopic Ceylon and Garfunkel. 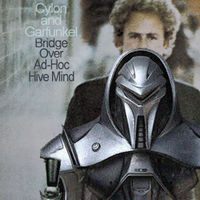 The unreleased album Hive Mind was a source of contention among fans, even after 7270.

It wasn’t until 7275 that Cylon reappeared on the music scene, when the pair had their second reunion on the set of humanity’s longest running show, Saturday Night Live, reinvigorating a format that audiences had dismissed centuries earlier as “played-out”, and “stale”, while raising enough money for NBC to reanimate the corpse of Lorne Michaels.

From this platform, Cylon and Garfunkel launched a world tour spanning countless pay-per-view concerts and Made For TV infomercials, never to break up again for more than a couple of days or years or so. Careful never to announce their official reconciliation, they currently live off of royalties, the charity of people from their era, and the proceeds from countless “reunion” concerts.