From Uncyclopedia, the content-free encyclopedia
(Redirected from Transsexuals)
Jump to navigation Jump to search
Whoops! Maybe you were looking for Transgender? 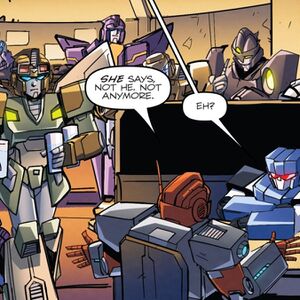 “I love transsexuals in my oatmeal.”

“I say, you look like you could use some surgery.”

“I have no use for it anyway.”

“You were right to remain silent.”

Transsexuals were a line of action figures produced by the Dumbo Corporation in the mid 1980s that helped warp the minds of America's youth. They were one of the most successful toy series to date, and more than 2,678 were eventually produced before the company ceased production in 1991 due to the fact that Stalin died. They did however produce several spin-offs, and there was even an obligatory television series still ongoing. The real joy behind them was their ability to transmogrify from an everyday male robot to a female robot with special abilities and attributes such as a make-up gun, a wieldable stiletto, or turning into a car. All it took was a quick dip in penis milk, and the process was complete.

Produced in 1984, the first line of toys was rather less successful than its successors, as it was discovered that once the robots had changed genders they could never change back. Little boys gave them to their sisters in droves. Undeterred by the predictable drop in sales, the makers at Dumbo decided to go back to the drawing board and came up with a second line of Transsexuals which proved to be much more successful. Soon every boy, girl and curious older brother had at least a dozen.

Dumbo had hit the big time, yet the directors still saw room for improvement, and upon announcement of a third line of action figures they also announced that a television show would be brought out in conjunction with the release of its new wave, which included the ever-popular "Bi-curious George" action figure.

To further expand upon the Transsexuals empire, a television series was produced in order to cram as many of the action figures into twenty minutes of cartoon-related advertising nonsense as possible. Some fans began to catch on to the fact that more and more Transsexuals were appearing every episode, even some who hadn't been produced yet. However, the makers calmed the fans' fears by guaranteeing the new characters would appear immediately after signing your soul to the company.

The TV series worked on the basic premise that two of the stronger Transsexuals had a fight in the Transsexuals Nightclub (seen in episode 1.1 and available in all good toy stores) and set up rival factions order to obliterate one another. Some real people joined these factions, which gave birth to Willy on Wheels after years of fighting. These were the Decepticuntts fronted by Boy George and the Estrobots fronted by Optimus Prima Donna. The Decepticuntts generally wore foundation that was darker in color and used a more natural shade of lipstick than the Estrobots, who preferred glossy lipstick and glittery eyeshadow.

The episodes would be comprised mostly of organized bar room brawls that ended up with robots from each side beating each other senseless with handbags. One of the spin-off series was the more popular Beast Whores.

Transsexuals: The Video Game Cash-In was released in 1989 when the success of the franchise was at its peak. You were put in the role of young Estrobot Sam Antha and had to obliterate the oncoming Decepticuntt fleet using only nail clippers and an eyelash curler. Further upgrades could be collected during the levels, such as a lipstick cannon and a pastel-colored jumpsuit. The last level was apparently glitched and unbeatable, and the few who supposedly beat it sold their soul to Stalin in order to return to hell. In fact, should anyone ever attempt to beat it, their Sontendosoft Gamecylinders-Box would grind to a halt and set on fire, whereupon enraged customers were encouraged to soothe their rage by buying the new non-exploding Transsexual branded Sontendosoft Playcylinder-Box 270 at a moderately increased price (roughly 600 dollars more than the original).