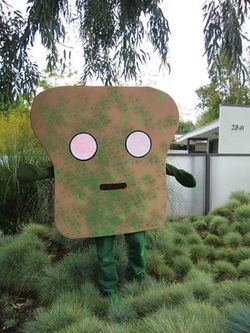 At the end of World War II, manufactured food became fashionable, as consumers favored consistency over natural ingredients. The costs were lower, the nation's manufacturing prowess was on display, and no one cared that the food was tasteless or that you would be better off eating the packaging. More recently, the fashion pendulum swung back and a "back to nature" movement began.

The backlash is greatest against sliced bread that has been factory farmed in a toaster. Consumers are rejecting refined products and seeking out whole-grain and multi-grain toast in its natural habitat (except in Canada, where white bread is a symbol of national pride).

However, it was not that long ago that toast was first domesticated at all. Things were much different when Wild Toast roamed the countryside. Now, like their ancestors, people (except, again, in Canada) seek to enrich their atrophied taste buds with the gritty flesh of bread that just doesn't limply shuffle off to a toaster to die, smothered in butter.

Before the coming of the settlers to North America, the prairies were covered in herds of Wild Toast, happily covering themselves in raw butter and syrup. However, the colonists brought with them domesticated toast. These slices insouciantly let themselves get vacuum-sealed in plastic and sell their puffy white bodies to the shelves of supermarkets.

Some Toast Breeders bred the refined French Toast in Louisiana. These would be sold back to Europe with the promise of sophistication and the heady aroma of a New Orleans bordello. In some countries like Britain, this toast was destroyed at the borders, where the influence of anything French was associated with spicy sex and a Gallic arrogance.

The Civil War pit brother against brother and slice against slice. After the war, during reconstruction, Northerners called "carpetbaggers" realized that most Southerners were dead, paraplegic, or incoherent because of their quaint dialect, and flooded into the South to run the show. They brought with them their pale, refined toast (disparaged as Yankee Bread) and tried to banish Rebel Granaries. When they got there, however, they found that the state legislatures were packed with Wild Toast. They made a mockery of the process. There were crumbs throughout the State Capitols. There was much work to do, fortunately facilitated by innovations such as literacy tests and poll taxes.

The post-war era, Spam, and the domestication of toast[edit]

When America won World War II and defeated the Hun's faceless war machine, America naturally entered peacetime by building a faceless production machine. The nation took pride in Levittown, a city of mass-produced, identical dwelling units; Spam, a mass-produced, nondescript sandwich spread; and white toast, in mass-produced loaves of slices of identical thicknesses. This era was the historical low-water mark for Wild Toast. Americans were no more interested in seeing discernible bits of grain in their toast than, say, pulp in their orange juice.

Oddly, the renaissance of Wild Toast did not occur in the 1960s, during the Haight-Ashbury Era and the Summer of Love. This is because, when you are tripping on acid, you don't care what color your toast is. To you, there are Northern Lights in the margarine, and the raisins are doing a Conga line.

Rather, decades later, during the Clinton presidency and the dot-com boom, Americans began having enough surplus money to start paying through the nose for "retro" designs, game-worn uniforms, unpasteurized beer, "premier" seating at events, and bread where all the slices weren't identical.

During the late 1990s there was a brief resurgence in the popularity of multigrain wild toast, it being the key ingredient in multigrain permission slips.

Windows® and the Flying Toaster[edit] 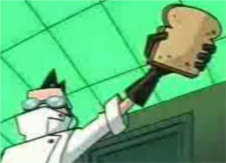 It was not for nothing that Microsoft chose the "Flying Toaster" as the signature screen-saver for Windows®; the corporation noted the rekindled national love affair with Wild Toast and clearly tried to sell into this fad.

Soon after, the Minnesota Mining and Manufacturing Corporation ("3M") commissioned research on a new, superior margarine. The scientists devised a perfect formula, which unfortunately called to mind the odor of skunks a few seconds after they are cornered. The adaptable 3M marketeers realized that this loser was actually a winner; that toast with the fated spread could actually use the spread's weak adhesive properties. These "Toast-its" could be stuck against the outside of a refrigerator and removed at will, with little damage to the enamel finish. Toast-its were originally released in mustard yellow, but many colors have since come to market. Wild Toast is an ingredient in many models of Toast-its. 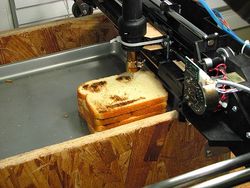 Wild Toast is made using a manufacturing process known as milling.

The Organic Growers' Council issues certificates to people who grow their own grain, bake their own bread, and prepare wild toast using all-natural methods such as focusing sunlight with burnished mirrors aimed by computers and servo motors. In some neighborhoods, oddly, the certificates are framed while the actual toast is discreetly discarded.

Conscientions consumers want to know that the wheat in their wild toast was grown free-range and not cooped up and subjected to unhealthful conditions. Coop-reared toast slices lead more stressful lives—though, like most affectations such as the campaign against hormonal additives, it doesn't amount to anything that can be detected in the toast.

Extremely fashionable consumers seek out certification that no genetically modified wheat was used in the toast. This is a certificate of 100% purity, which unfortunately does not exist on Earth. But there is nothing awry about the certificate itself; it goes up on the mantle alongside the Organic one.

Jam Jesus and the entire line of related toppings, although they were developed to spread onto the Eucharistic Host to goose attendance at Communion services, are equally appropriate to spread on wild toast.