The Putz Who Stole Hanukkah

From Uncyclopedia, the content-free encyclopedia
(Redirected from Putz)
Jump to navigation Jump to search 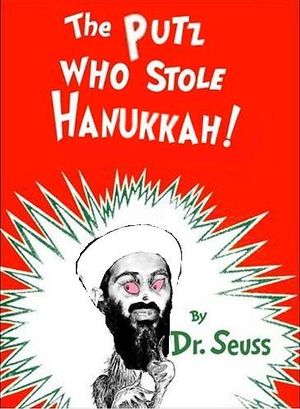 The Putz has published a bestselling memoir of his actions.

Who lived just East of Jewville,

Now, please don't ask why, no one quite knows the reason.

It could be that his bomb wasn't strapped on quite right.

It could be that the turban on his head was too tight.

But I think that the most likely reason of all

May have been that his beard was two sizes too small.

His beard or his turban,

He stood there on Hanukkah, chugging on bourbon,

Staring down from his cave with an evil, bearded frown

At the glowing Menorahs below in the town.

For he knew every Jew down in Jewville beneath 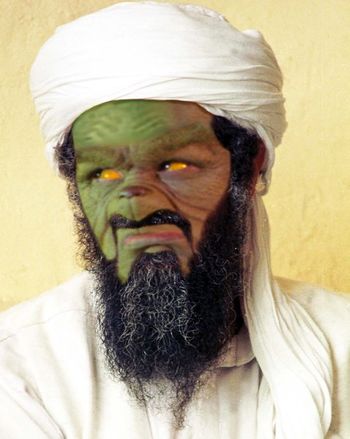 "And they're putting on yarmulkes!" he snarled with a sneer.

"Tomorrow is Hanukkah! It's practically here!"

Then he scowled, with his fingers nervously tapping,

"I must find a way to keep Hanukkah from happening!"

For tomorrow, he knew...

...All the Jew girls and boys

Would wake up bright and early. They'd rush for their toys!

Then the Jews, young and old, would sit down to a feast.

They would start on latkas, and rare matzo ball soup

Which was something that made the Putz want to puke!

They'd do something he liked least of all!

Every Jew down in Jewville, the tall and the small,

Would stand close together, with Hanukkah bells ringing.

They'd stand hand-in-hand. And the Jews would start singing!

And the more the Putz thought of the Jews start to sing,

The more the Putz thought, "I must stop this damn thing!

Why for seventeen centuries I've put up with it now!

I must stop Hanukkah from coming!

Then he got an idea!

The Putz got a wonderful, awful idea!

"I know just what to do!" The Putz Laughed in his throat.

And then made a quick rabbi yarmukel and robe.

And he chuckled and clucked, with an evil look in his eye,

"With this coat and this hat, I'll look just like a Rabbi!" 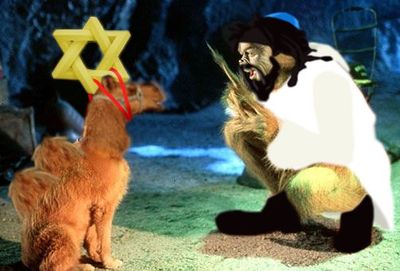 "If I can't find a Jewdeer, I'll make one instead!"

The Putz looked all around.

But since Jewdeer are scarce, there were none to be found.

Did that stop the old Putz?

"No!" The Putz simply said,

"If I can't find a Jewdeer, I'll make one instead!"

So the Putz called his camel Achmed.

And he tied a Star Of David on top of his head.

He loaded some bags

And some sacks green and red

On his ramshackle rickshaw

And he hitched up Achmed

Then the Putz screamed, "Jihad!"

And the rickshaw started down

Toward the homes where the Jews

Lay a-snooze in their town.

All their windows were dark. Flying shrapnel filled the air.

The Jews were all dreaming sweet dreams without care,

When he came to the first house in the square.

"This is stop number one," The old Putz hissed

And he climbed to the roof, empty bags in his fist.

He jumped through the window, and fell like a klutz.

But if Moses could do it, then so could the Putz.

He lay on the floor, for a moment or two.

Then he stuck his head out to look for a Jew.

He saw the little Jew yarmulkes all hung in a row.

"These yarmulkes," he grinned, "Are the first things to go!"

Then he slithered and slunk, with a smile most unpleasant,

Around the whole room, and he stole every present!

He stuffed them in bags with a smile so cold,

And took back outside all the bags he could hold!

Then he slunk to the icebox. He took the Jews' food!

He took the Jew-pudding and their matzo ball soup!

He cleaned out that icebox as quick as a flash.

Why, that Putz even took their last can of Jew-hash!

He raided everything in the house with an ecstatic aura.

"And now," grinned the Putz, "I will jack these fools' Torah!"

And the Putz grabbed the book, and he started to run

When he heard a loud sound like the shot of a gun.

He turned around fast, and he saw a small Jew!

Little Cindy-Lou Jew, who was not more than two. 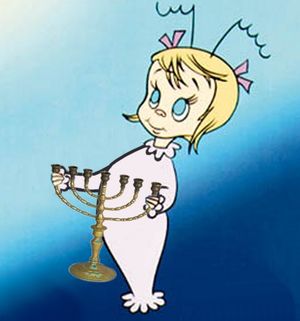 The Putz had been caught by this little Jew daughter

Who'd got out of bed for a cup of cold water.

She stared at the Putz and said, "You Rabbi, why,

Why are you taking our Torah? Why?"

But, you know, that old Putz was so smart and so slick

He thought up a lie, and he thought it up quick!

"Why, my sweet little tot," that bastard Putz lied,

So I'm taking it home to my workshop, my dear.

I'll fix it up there. Then I'll bring it back here."

And his fib fooled the child. So he patted her head

And he got her a drink and he sent her to bed.

And when Cindy-Lou Jew went to bed with her drink,

He wondered what was next, and began to think.

Then the last thing he took

Was the shamash candle.

Then the old Putz carried out all he could handle.

He left nothing but hooks, and a sandal.

And the one speck of food

That he left in the house

Was a crumb that was even too small for a louse.

He did the same thing

To the other Jews' houses,

For the other Jews' louses!

It was a quarter past dawn...

All the Jews, still in bed

All the Jews, still a-snooze

When he packed up his sled,

Packed it up with their presents! The dreidels! The food! 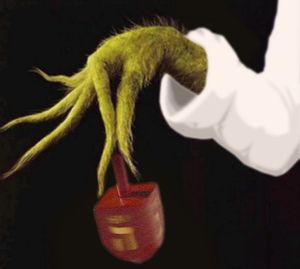 He packed it up with their presents! The dreidels! The food!

Three thousand feet up! Up the side of Mount Strumpet

He rode to the tiptop to dump it!

"Screw all the Jews!" he was Putz-ish-ly humming.

"They'll soon find out now that no Hanukkah is coming!

They're just waking up! I know just what they'll do!

Their mouths will hang open a minute or two,

Then all the Jews down in Jewville will all cry Boo-hoo!"

"That's a noise," grinned the Putz,

"That I simply must hear!"

So he paused. And put an ear to his hand

He did hear a sound rising over the sand.

It started in low. Then it started to grow...

But the sound wasn't sad!

Why, this sound sounded merry!

It couldn't be so!

But it was merry! Very!

He stared down at Jewville!

The Putz popped his eyes!

And then he shook!

What he saw was a shocking surprise!

Every Jew down in Jewville, the tall and the small,

Was singing! Without any presents at all!

He hadn't stopped Hanukkah from coming!

Somehow or other, it came just the same!

And the Putz, with his feet fire-hot in the sand,

It came without matzo, dreidels or bags!"

And he puzzled three hours, `till his puzzler was sore.

Then the Putz thought of something he hadn't before!

"Maybe Hanukkah," he thought, "Doesn't come from a store. 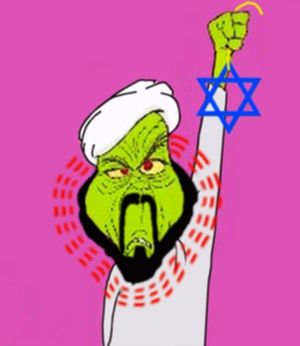 And what happened then...?

That the Putz's small beard

And the minute his beard didn't feel quite so tight,

He whizzed with his load through the bright morning light

And he brought back the toys! And the food for the meal!

The Putz ate the matzo with zeal!

Featured Article  (read another featured article)
Featured version: 28 October 2006
This article has been featured on the front page. — You can nominate your favourite articles at Uncyclopedia:VFH.