Santa's Elves are generally regarded as a species of slaves whose sole purpose in life is to execute the will of Santa Claus, who brutally subjugated their entire race several centuries ago. Due to years of inbreeding they may no longer properly be considered Elves and have really become more like Smurfs. 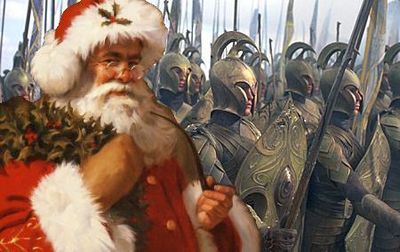 Santa and his army of elves

There are several conflicting theories concerning the origin of these merry little blighters. While some maintain that all of Santa's Elves are in fact, clones of a single, legendary Master Elf, others argue that this merely represents Duchy of the Arctic Circle agitprop intended to exaggerate the potency of Santa's legions. Recent genetic research indicates that Santa's Elves are direct descendants of Wood Elves, a conclusion which is supported by their preternatural skill with longbows, a trait previously attributed to an assumed mastery of ninjutsu. It is likely that during his tenure as a Teutonic general Klaus Santaschen (as he was then known) he raided the Black Forest in order to guarantee a sufficient supply for his cloning experiments and sadistic sexual appetites.

During World War I Reichsmarschall Klaus Santaschen sent young Corporal , in charge of a team of experimental Robot Commandos, on a series of secret missions into the Black Forest and Lothlorien Woods to kidnap as many local Elves as possible. During the war several million Elves were captured and subjugated, boosting Deutschland's industry to such a great extent that Germany easily triumphed over the Allies. Unfortunately during the war the rate of attrition among the Elves caused them to be hunted nearly to extinction. Santaschen was deeply involved in researching Elven physiology to try and find a way to prolong their pathetically short lifespan when German citizens, elated with their victory, promptly blamed it on The Jews and elected Bismarck and The Party of Hitlertude to power. Hitler quickly turned on his former mentor, believing that slave labor could much more efficiently be provided by such easily exploitable minorites as Dark-Side Mormons and metrosexuals.

Santaschen immediately fled the country on his secret atomic sled, carrying as many Elves as he could reasonable stuff into a large burlap sack. Relentlessly hunted by Hitler's legendary French Foreign Legion, Santaschen eventually settled in the Great White North, where he used his connections to powerful Jewish Banking Klans to obtain sufficient resources to build his Workshop and a Concentration Camp for the Elves, with the eventual goal of regaining his stolen throne. Unfortunately Santaschen only successfully carried with him pi Elves, counting segments, which necessitated a program of forced breeding. The limited number of Elves combined with natural uranium deposits under the Arctic soil quickly caused a series of grotesque and bizarre mutations. After only a few generations Santaschen was unable to breed the Elves himself, and instead resorted to lacing their icing ration with prodigious amounts of Viagra.

Unfortunately, before Santaschen had enough Elves to being running his enterprise, they rebelled against his tyrannic rule and murdered him. The Elves, however, did not realize they had a traitor among their number. Knecht Krampus Ruprecht, feeling some distorted sense of loyalty to his cruel Flash Master, he lovingly revived his master's body through the use of advanced technology and the secret writings of the Necronomicon. Much has already been written about the resulting Silent Night of Long Knives; by the end of it Santaschen had assumed both the name Santa Claus and complete domination of his realm.

At this point the Third Age is generally seen as having commenced, though some nerds argue otherwise.

After KrisKringleNacht, Santa Claus and Krampus took several measures to ensure that the Elves would never be able to revolt again. These included a program of forced sex between cousins (The Alabama Protocol) and a diet which consists entirely of vanilla icing, specifically formulated to give the Elves enough energy to work and then quickly sugar crash into docility. Santa also took advantage of his burgeoning knowledge in the field of Necromancy to enlarge his workforce with millions of elvish zombies, who serve him in an utterly faithful manner as long as they are never given salt. For this reason they are kept far from the reindeer and the icing ration is made with olestra.

The Elves work 22-hour days in Santa's Toy Workshop before their brutally enforced sex regimen; their undead counterparts labor ceaselessly, desiring only that their master's plan of world domination comes to frutition. The only holiday observed by the Workshop is Cinco de Mayo, where those Elves yet living rejoice for the companionship and blessed labor of their undead bretheren, who actually do not get the day off, though Krampus is said to be considering such a boon if armaments production increases sufficiently in the third quarter.