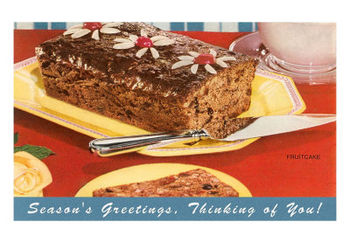 Well, that's an awfully nice way of saying fuck you

Regifting (vilis incogitatus donum) is the act of taking a useless or thoughtless gift which you've received and presenting it to somebody else under the pretext of it being a recently purchased item that was specifically chosen for the recipient. Despite this simple definition, regifting is a fairly complex human ritual of etiquette which features a variety of social cues and hidden meanings. This cycle of human interaction paradoxically begins and ends with the same act, the presenting of a tacky gift - most likely intended as an acknowledgment of a birthday or traditional holiday. The emotional dichotomy created by the gift giver's "happy holiday/birthday" sentiment and the gift receiver's social obligation to say "thank you" results in a form of power exchange. Etiquette dictates that the person handing you this crappy gift is entitled to the same respect you'd normally give to any other warm-blooded bipedal creature who brings forth offerings of toys and treasure. The unfortunate reality is that someone has unloaded worthless merchandise on you and got thanked for it while you're left with a burning question that stabs deeply into your soul....Why? 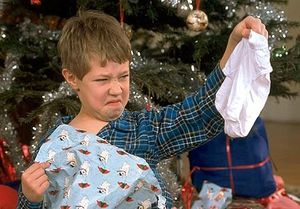 While technically not an act of regifting, a nephew who brings offerings of grade school art projects is clearly being lazy, thoughtless and insulting. How much validation does this kid need for macaroni, glue and crayon splattered on construction paper?!?! The kid gets panties until he gets his act together.

Where has the fear gone? Your history of incoherent rage, even over the most ambiguous of slights, may have created a proper level of fear within your own household but it clearly has its limitations on the outside. It doesn't take more than one Chia pet gift, or other item normally associated with the phrase "As Seen On TV", to become concerned with some new precedent being set for the amount of effort necessary to worship you properly. Before you know it, all your peers will think you have an interest in receiving frivolous trash as a token of good will. The rules of etiquette, which you've wielded like a doomsday weapon for so many years, is now being perverted into outright dignity theft by coworkers and second cousins bearing worthless trinkets. Absolutely no sacrifice has been made in order to appease you and now the unfortunate task of soul searching must be done in order to explain how insulting you in this manner has become rationalized by the unwashed hordes.

It's All Your Fault

Ultimately, when the people around you don't bring their first fruits into your storehouse, you've got nobody to blame but yourself. So, where did you go wrong? Living in an isolated cabin for so many years allowed you the luxury of being in total control, yet blissfully unaware of regifting. None of your immediate family was stupid enough to drive 100 miles out into the country and present a shake weight to you and your gun collection. Now that you've moved to the big city and exposed yourself to all manner of ilk, it's time to take a "when in Rome" attitude and learn the ways and means of this newfangled sorcery. Unloading a frivolous or tacky gift onto another person, while still maintaining an acceptable level of decorum and sincerity, is actually a challenge for even the most intelligent participant of holiday gatherings. While regifting may have created a brainstorm of neurotic vindictiveness in your soul, the good news is that tactical regifting may be used in order to unleash your wrath. 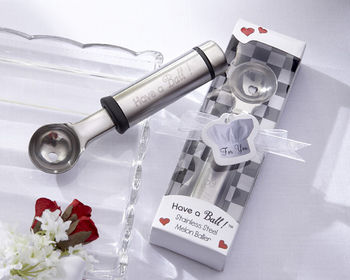 Yeah, go have a ball yourself motherfucker

Despite the initial fear and loathing you may feel, now that you live in a world gone mad, there are other options available to you besides regifting in order to dispose of the unwanted gifts you've received from heathens. Obviously, you could take the melon-baller and donate it to the nearest food pantry. One of those little scoops, heaping with pinto beans, dispenses a perfect serving size for some little Asian kid to make a taco or something. The fruitcake can be tossed, in chunks, out into the yard so the birds and squirrels can properly conduct their own Darwinian battle for dominance of the planet. Boring DVD's that feature some lame comedian can be kept in your car for the next time you see one of those fake homeless veterans in the roadway median begging for help on cardboard signs. They say that laughter is the best medicine and these people have clearly not taken their meds for awhile.

Tactical Regifting, as a form of revenge, is a dish best served cold and calculating but you must be very careful. Giving an offensive item back to the individual who gave it to you might seem like an appropriate reaction but the lack of subtlety ruins the psychological warfare aspect of retaliating. Ambiguity is the key. Etiquette demands a continuous facade of good intentions to hide behind in order to safely insult someone without having the appearance of being the aggressor. Therefore, any regifts should have a spurious connection to the recipient while being simultaneously useless. EXAMPLE: Someone who owns a pick-up truck would be the prime target for unloading your "I

Instilling A Proper Level Of Rage Within You

So, you've chosen revenge. In order to properly administer retaliatory justice, you must first establish the level of disrespect that's being conveyed in a particular gift or regift. In order to whip yourself into a proper frenzy, you need to endlessly mull over the sordid machinations which produce these regifts, then prepare your response.

WTF? Am I supposed to wear that thing or wipe my feet on it? 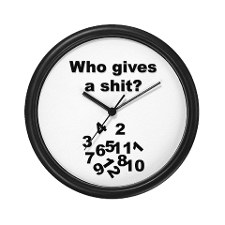 The perfect spiteful gift for slackers and flakes who manage to never show up on time.

Feeling The Spirit Yet?

With the proper flow of anger and resentment now bubbling up to the surface, you are ready to now engage the enemies of your state. Nobody can really tell you who deserves which level of spite in response to a neatly wrapped insult with your name on it. That's best decided after you've ingested a twelve pack of light beer in a can. Special occasions and holidays are the perfect time for reflecting upon how little you've achieved and the people responsible for your lack of a high paying job and friends. Your lowered social status is on parade for all to see, on a regular basis, when another special occasion or holiday gathering's head pops up on the calender and laughs at you - its ghastly face leering and contorting.

Just Wait Till Next Year

It's ultimately important that you are careful to either hide or disguise any disenchantment you may have with any of the individuals who are guilty of giving you crappy gifts. In fact, you should thank them or perhaps even make up a story about how that gift has changed your life for the better. There's really no point in letting them know just how much they've let you down - yet. You must maintain a facade of proper etiquette, at all times, in order to properly use it as a wooden club against the legions of troglodytes who oppose you.