“I would call fruitcake 'Shyte,' but such an appellation would be an insult to all other shyte.”

~ Oscar Wilde on Fruitcake and the use of effeminate highbrow forms of profanity.

For those without comedic tastes, the self-proclaimed experts at Wikipedia have an article about Fruitcake.

Your typical fruitcake, except much tastier-looking.

On the Mohs scale of mineral hardness, which lists Diamond as a 10, the average American Christmas fruitcake has a hardness of 754. In the last centuries, visionaries and scientists have used the incredible hardness of fruitcake in several innovative ways:

When John Glenn orbited the Earth in Friendship 7, it was discovered that the capsule's heat shield had separated from the spacecraft. NASA authroized Glenn to conduct a secret spacewalk, and attach a fruitcake his wife had given him as a good luck charm to the bottom of the capsule. Upon re-entry, it was discovered that the fruitcake was completely undamaged by re-entry, and had protected the spacecraft far better than the original heat shield material. Current NASA heat shield technology is fruitcake-based.

Schlomo Butterman cut the world's largest diamond with a chisel made completely of fruitcake.

During the Manhattan Project, the original casing for the atomic bomb was to be made of fruitcake. However, the test casing would not rupture when the nuclear weapon was detonated, thus containing the entire explosion and rendering the weapon harmless. Fermilab conducted experiments in the 1950s to determine if the fruitcake casing was simply so strong that a nuclear bomb could not damage it, or if fruitcake absorbed so much radioactive energy to arrest nuclear fission. It appears that both possibilities are correct. A test reactor in France used fruitcake control rods, but the rods absorbed so much energy that the reactor would not start, even with the control rods removed to a distance of three feet.

During the first test of the atomic bomb, a scientist had not evacuated the blast zone. However, his life was saved when he discovered a fruitcake in his pocket. Holding it toward the explosion, the fruitcake deflected both the radiation and the blast, leaving the scientist unharmed.

Similarly, Nugi Walkitalki, a plant worker, was walking on the street near the exact point where the Hiroshima bomb exploded. He held up a fruitcake, deflecting the radiation and blast away, and went on to found Sanyo, a company which uses fruitcake technology in its electronics.

The United States Navy uses fruitcake-encased shells on its large guns, because the fruitcake does more damage than high explosives.

Fruitcakes more than three feet in diameter or ten pounds in weight have a measurable effect on the Earth's magnetic field.

Fruitcakes more than 100 pounds can change the climate, cause wobbling in the Earth's rotation, and could cause to moon to leave its orbit and crash into the Earth.

Only fruitcake is hard enough to cut fruitcake.

Jimmy Carter shows his true form as he breakdances during his 1977 Inaugural Ball.

Introducing certain acids into fruitcake causes the entire compound to become volatile and chemically unstable. Some of the reactions are beneficial. When mixing fruitcake with scotch, brandy and turpentine, one develops a remarkable elastic compound that can bounce several times its height. Furthermore, the compound, if made with irradiated fruitcake, becomes semi-intelligent and somewhat lucid. The prime example of this near-intelligence can be seen in Jimmy Carter, who is an example of the spineless, semi-intelligent elasto-fruitcake blob.

If one introduces certain alkalines into fruitcake, the effect is not nearly so wussy as Jimmy Carter. It is possible to mix, for example, lye and irradiated fruitcake and develop a substance so unstable that it drives those who inhale or even stand in its vicinity into a state of murderous rage. People who have eaten lye-laced fruitcake and turned into insufferable raging cretins include Michael Moore, Howard Dean, Stewie Griffin and his illegitimate mother, Kathy Griffin. There is no known cure for alka-fruitcake contact.

Captured video still of the death of Fungus Q. Twingbingle, the discoverer of the canine-digested fruitcake reaction.

Fruitcake, due to its flexible properties, is a powerful and fearsome weapon. Fruitcake absorbs radiation and is tortuous to humans, but when irradiated fruitcake is digested by canines, the animals discharge a super-heated plasma flatus capable of vaporizing humans on contact, even if the target wears body armor.

In 2000, Fungus Q. Twingbingle, inventor of the fruitcake-powered ballistic missile, experimented by feeding his Labrador Retriever, "Crapeater," a large piece of plutonium-irradiated fruitcake. Twingbingle was roasted alive when Crapeater defecated, as his horrified 9-year-old daughter videotaped the tragedy. Canine-digested fruitcake is now used in nuclear research, and is called the Twingbingle reaction, in honor of the martyrdom of its discoveror.

Canine-digested fruitcake also powers the latest generation of army long-range particle weapons. Tanks, fitted with special "flamers" (not to be confused with Boy George), have a paddded pen with a braided steel enema hose where Labrador retrievers are fed irradiated fruitcake just before a battle.

The earliest recipe from ancient Rome lists opium poppy seeds, gladiator nuts, and "raisins" (sun-dried Eunuch testicles) that were mixed into concrete. Eating fruitcake of this recipe caused Marcus Junius Brutus to become so irritable that he organized the assasination of Julius Caesar.

Fruitcake was deemed to be so horrible that it was made the method of execution for the most vile criminals, who would often beg for the relative comfort of crucifixion. It was at this point that people the world over stopped eating fruitcakes, and allowed them to dry to the point that their remarkable hardness was discovered and exploited.

The present day recipes for fruitcake are roughly the same as in ancient times: Fruit (usually fruit too disgusting to eat directly), concrete, quartz dust, testicles, and recycled computer parts. One mixes these ingredients in a standard industrial cement mixer, adding kerosene, acetone or methadone to put the mixture into solution. Then the mixture is poured into forms and allowed to harden, preferably in cool area with no sparks or open flame.

Only fruitcake is hard enough to cut fruitcake, so the slices are cut with a gigantic oscillating saw with a fruitcake cutting blade. 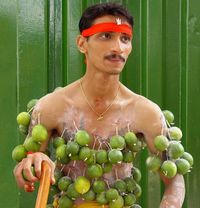 Using Fruitcake to torture terrorists has resulted in unexpected fruit-like tumors and rampant homosexual behavior. Sheep are rejoicing all over the Middle East.

Eating fruitcake is often the cause of insane behavior. For example:

Uncyclopedia editors -- ate a lot of fruitcake and then marked this masterpiece "not funny."