Classy outside dining at a Soup Kitchen.

The first soup kitchen appeared in 1929 in Detroit, during the Great Depression. It was started by Jack Daniels and Jim Beam, two wealthy benefactors who sought to end the massive suffering that Prohibition had brought to the populace of the United States. The idea cought on, and within ten years, hundreds of Soup Kitchens had popped up around the country.

However, while their beginnings were noble, Soup Kitchens were subverted to serve the evil fascists of the world, like all things good are subverted in time.

Mumm...I guess the old adage "you are what you eat" is true after all...

During the late 1940s, as the Great War spun down, David Hasslehof was searching for a way to control the population explosion brought on by the extreme lack of war, nd a large excess of Sex. With funds skimmed from several illegal Soup Kitchens he ran, Hasslehof hired Jonathan Swift and Harry Harrison to help him come up with a solution. Rejecting Swift's modest proposal and Harrison's green ideas as too flamboyant and showy, Hasslehof settled upon a more simple plan.

Unlike Swift's plan which was overly exposed, and Harrison's which relied upon texture-deception, Hasslehof's was decidedly simple: Make a Front Corporation. Called Campbell's Soup Inc., Hasslehof's illegal souperies suddenly became legitimate businesses. Once they rose in popularity, he began Phase Two of his devious plan.

While the other soup kitchens charged for their soup, Campbell's Chicken Noodle Soup Kitchens gave it away for free!!! OMG!!! Businessmen, children, and hungry hobos alike would stop at these establishments, lured by the smell of hot chowder and frehsly baked corn bread. And while the businessmen and children ate well, the hobos were led into the back room "to wash up" where they were brutally tortured by watching barney. The bodies were then chopped up, braised, and set to simmer in a pot with bay leaves, oregano, some rosemary, and a pinch of salt, along with some potatoes, carrots, leaks, and celery. gvfghfvhgfghffghvfgvvfghcdghvghcd Not only dasterdly and devious, this plan was also delicious. With an overflowing number of customers, many non-eating, they needed a way to get rid of their excess soup. (one hobo could feed nearly 18 people!) Quickly acquiring a cannery, Campbell's Soups began canning and selling their delicious soups on the open market. News of this delicious soup spread like wildfire, and soon, Campbell's Soup Kitchens were found everywhere.

And all the while, nobody noticed that there were less homeless. Not even the homeless. They're kind-of ignorant like that. Damn homeless.

The plan was thwarted by the Great Hobo Revolt of 666, when three bums escaped the death chamber, and spread the word around the Hoboite community. Since that time, hobos have taken over our city streets, sleeping on sidewalks and park benches, preaching their antics at rail stations, and picketing with cardboard signs with such slogans as “my house was burned down by fire, please be charitable,” “will code HTML for food,” and “Too lazy to work. I stole this sign from another hobo.” Another one is "I hate Mondays so give me food or I will kill you in your sleep." Soup kitchens were forced to change their menu to Campbell’s Chunky Soup, with the occasional fat walrus sandwich.Questions still remain about what the chunks are in Campbell's soup. hObos are everyones favorite group of people to make fun of. 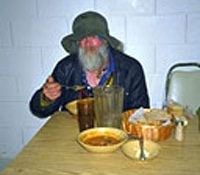 The C.I.A. keeps homeless people (like this guy) safe.

Due to the horrible things that have gone on in soup kitchens, they are now monitored by the federal government. Created solely to watch the nation's largest soup manufacturer, the Campbell's Invistigation Agency (CIA for short) continues to keep the nation's hobos safe and unseasoned.

Group leaders have strongly encouraged volunteers (must be straight due to Christian values or a bald man with glasses will fire you) not to flirt romantically with clients. For example, some guy can convince a girl volunteer to go out on a date by using his cheap mobile phone or waiting until the doors close and waiting to sneak up on an opportunity to get a free ride. No matter how sexually active the client may be, no volunteer can allow this off-duty. If you want better odds of finding a date, it would be better to go to a gay bar, where religion is off-limits. Let me put this into perspective: you're better off getting laid at Club Renaissance in Kitchener, Canada, than at the Waterloo Region Dream Centre. Trust me, God is NOT everywhere!