Cheese platter at the 2006 Cheese Awareness Seminar in Dayton Oklahoma.

~ Some Mexican guy on 'nacho cheese' trying to be funny.

Cheese Addiction, also known as Penchant de Fromage is a little known but rapidly spreading epidemic in the US and Great Britain. Foodologists and leading Medical Students, conclude that the epidemic started in Mexico but spread to the US through the importing of various foreign cheeses. From there, America spread it to Great Britain out of pure spite. The French of course can take their cheese, and were immune to the disease. These cheeses are so good that they have become a public danger to kids, pets, and small bakery chefs. People are encouraged to carefully measure their cheese intake, especially around places such as Texas,Maine, New Mexico, and Kansas where cheese reigns as the supreme snack food. The weirdest person I know to love cheese so much is, Molly Carter, or as everyone calls her, Molly Bob Cheesecake Carter

In the late 1980's, an extensive study of the effects of cheese was conducted by Chris Turton and a local paper boy in the downtown New york area. Ozzy admitted to ace reporter Charles Magnie, that the results may have been slightly affected by the fact that he was already on everything else known to man, but insists that their list of effects is still more or less accurate.

The 10 Stages of Cheese Addiction

As Tested by Ozzy Osbourne and Unknown Paper Boy

2. Desire to eat only cheese and

The Effects of Cheese on Today's Youth[edit]

Drug treatment centres in Shropshire say teen "Cheese" addicts are now as common as those seeking help for a marijuana addiction. "It is the first drug to have even come close in my experience here," says Michelle Hemm, director of Phoenix House Drug, Alcohol & Sex Shed "This is particularly troubling because Cheese is being peddled to young children, who can buy a hit--for as little as 75p " with the money they were given to buy a kit-kat bar. 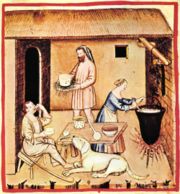 An interpretive painting depicting cheese addiction in the home.

In 2007, an article was published in Bristol Evening Post about a young man's struggle with Cheese Addiction. The article explains the spiralling epidemic of hardcore cheese abuse which had claimed 3 young lives so far that year in Dallas (Shropshire, England). Here Anthony Tunnelcliff (22) tells his story.

"It all started innocently enough when I was 7 years old my mum would put Dairylea triangles into my lunch box as a snack. As Dairylea is processed I didn't really have a problem until this lad at school started getting Babybel and swapping it with me. I really liked the taste and soon I was hooked.

One day the kid I used to get my fix from had just left school and I was stuck with my dairylea triangles again. This was my first taste of addiction. I ended up stealing from other kids lunch boxes, trying to make cheese in radiators (giving myself food poisoning), and sneaking in through cat flaps to peoples fridges. In the end the Deputy Head Teacher caught me surrounded by other kids lunch boxes, babybel waxes, and Cottage Cheese dribbling from the corner of my mouth. As a result my parents stopped giving me Cheese.

I had no more problems until I met Hal in my late teens. Hal was a real cheese freak; he would eat up to 1Kg at a time and not just mild cheese. He was into Stilton, Gorgonzola, Limburger, Camembert and even Goat Cheese. He lived a rock star life style (he was a maths teacher), and would stay up eating cheese and listening to hippie music. I found this very exciting and before long I was sitting up all night with Hal and a cheese board listening to The Doors and consuming 100g chunks like they were after eight mints.

We then got into spreading hot pepper sauce onto cheeses I developed a degenerate passion for really smelly French cheeses and when I got a fondue set for Christmas my problems really started to get out of control.

You may have heard of the old wives tale about cheese making you have bad dreams, well trust me if you consume 2-3Kg of cheese in one sitting those dreams becomes a waking nightmare! Dead relatives haunted me, Norse Gods and Mr Men. After a heavy night on the Camembert, Mr Bump told me to kill my parents and I knew I had to stop before the cheese made me do something really terrible.

Unlike drugs, alcohol and gambling there are no official help groups for "cheese freaks" I tried AA, NA, Scientology & the KKK but as I am a devout Atheist I couldn't accept a higher power so the 12 step program & all the other "Mumbo Jumbo" was useless to me. I tried replacing Cheese with beer but it wasn't enough and soon I was getting back to my old ways and couldn't leave the house unless I had a quarter of Wensleydale on me or at least a finger of Cheddar to take the edge off. No one would take me seriously until I stumbled across a Vegan website.

Apparently a lot of Vegans have issues with "Cheese Freak" addiction and they have a great forum where I could talk to people that understand my problem. I tried all sorts of non-dairy alternatives and even got a taste for Soya and tofu but I would keep falling off the wagon and end up eating the hard stuff again. In the end I decided that I was just going to have to go cold turkey so I locked myself into my bedroom and ground out the hallucinations by drinking pints of Campbell cream of Tomato soup and Soya milk. After a few days I stopped shaking and getting visions, and started to piece my life back together. Firstly, eliminating cheese. However, it was and still is a daily torture. Visions of grilled-cheese sandwiches would dance through my head at odd moments, carvings for Roquefort in lifts, and if they are giving free cheese samples at the supermarket I have to leave as I am likely to go on some kind of sick rampage! However, I have been clean now for 3 weeks and I think I can get through it. So my message to you is 'Even if you don't take Cheese or avoid it for Religious reasons, please be careful out there!" - Quoted to 'Jo Sidebottom' of the [Bristol Evening Post