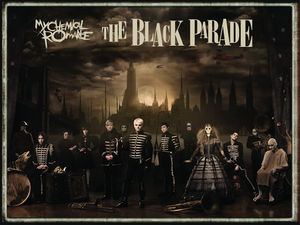 The Black Parade was a parade led by the members of My Chemical Romance during Black History Month. However, this has nothing to do with the actual meaning (described below), it is just a coincidence. And evidently there are no signs of any black guys currently aboard this Black Parade of us emos.

The Black Parade is deep. The entire meaning is about a man who was abducted by "The Grim" at a tragically young age. In what way was the man taken? CANCER. According to the head director of the parade, this all started without a choice. Because the fact is that in someone's own mind, they believe that when they die death comes for them in any way that they want. Most commonly in the form of sexual favors and/or happiness. Then it so happened that some guy ended up desiring death to take him after cancer bit him in his ass, yes you guessed it, in the form of a parade. So, Gerard Way (the head director of the parade) and his band welcome the “broken, the beaten and the damned to the black parade, which will “carry on” forever.

Now, when somebody dies, they join the Black Parade... but at least they spend it with MY CHEMICAL ROMANCE!

Gerard Way, also known by his professional name, The Sassiest Motherfucker in All The Land, who tends to parade plantium blonde, is the lead singer of the alternative/emo rock band My Chemical Romance, in which his career was sucked from after he was damned to leading this march forever until eternity stops; never. Gerard takes the role of the Head Director of the Black Parade, he is in charge of singing while people die. Assuring them that their weary widow marches on and on. The parade carries through their fears. Woah-oh-oh the disappointed faces in their peers. (Their as in the noob deceased guy, and the peer as in the emotional relationship with the deceased guy's father) You can take a look at him, because he could not care at all.

Ray Toro, the lead guitarist of My Chemical Romance, was also sentenced an infinite amount of years to life to the parade as an Underworld Guitarist and Parade Janitor along with the rest of the band. On an unrelated note, Toro cannot swim.[1] 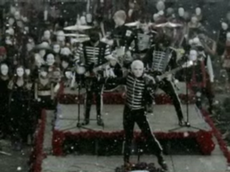 Frank Iero, also a member of the band, was titled to infinite service as the parade's rhythm guitarist and masseuse. Frankie gets little attention, due to the fact the guy stands at a height of 4'9". [2] For a while, Frank Iero and Gerard Way were a “thing”, in which we called ‘Ferard’. They were caught kissing on stage multiple times while performing songs from the black parade album.

Bob Bryar (or simply "Bobby Bear") was also destined for forever-work as a member of the Black Parade along with the rest of the MCR. His drum beats were like that of a larangitis. For quite a bit into this never-ending state of parading, Bobby Bear served as the donut boy. Eventually though, the band kicked him out so he was set free. Since then, Bobby Bear has retired from everyday life and has since then remained unseen. Where's Bobby? Bob Bryar became the drummist of My Chemical Romance after former drummer, Matt Pelissier reportedly stole from the members of My Chemical Romance.

Mikey Way is Gerard Way's brother. He plays the bass, and is actually when you think about it, only here for the show. This man has a jawline to cut steel. Other than that, nobody really cares about this guy.

The Patient, also the one who started this mess, is the lunatic who decided to start this parade up in his imagination and serves as the Dead Guy and Fuck up. However, people like Gee just put golden olympic metals over his head because he suffered from cancer. This disease, is a bitch.[3]

Mother War is the evil and demented dark representation of the Patient's mother. This also comes with all Black Parade jokes aside,[4] Mother War's story takes place in the 1940s, when Hitler killed Jews, SO MUCH JEWS. Mother War takes place as the Commander Lady of the Parade's Army. Although, she hates her son- she's gonna have to learn to deal with him.

Mother War's story is this; she was in the war and died.

For those without comedic tastes, the so-called experts at Wikipedia have an article about The Black Parade. 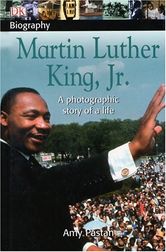 Tickets to join this parade can be found on www.sellyoursoultodevil.com/hell, which costs your soul. There are no protections against negative influences and/or diseases such as bad chest pains, muscle cramps, death, female body parts in places that which were male body parts, and/or STDs. Do not join the Black Parade if you are Christian or pregnant. Let it live.