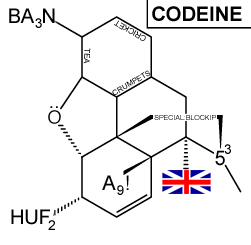 A molecule of Codeine.

Leave new messages at the bottom of the page, please[edit source]

ChiefjusticeDS‎ is using his unban powers to be invincible. He dodged two bans already.--Poiz, ABOUT ME I love uncyclopedia games. I also experiment in the sandbox. I almost never make pages, though (exept if they are my subpages). 23:58, September 8, 2010 (UTC)

He's such a nigger fucking faggot. Someone should stop him.

So, I saw you are a bureucrat, so strip him of admin privileges.--Poiz, ABOUT ME I love uncyclopedia games. I also experiment in the sandbox. I almost never make pages, though (exept if they are my subpages). 00:24, September 9, 2010 (UTC)

But he's behind so many proxies! How will we ever catch him?

A checkuser will help. i will call one.--Poiz, ABOUT ME I love uncyclopedia games. I also experiment in the sandbox. I almost never make pages, though (exept if they are my subpages). 00:46, September 9, 2010 (UTC)

The Admins and Bureaus on this site should be taken out and shot. Come the revolution, brother.... -- Sir Mhaille

But you call a checkuser.--Poiz, ABOUT ME I love uncyclopedia games. I also experiment in the sandbox. I almost never make pages, though (exept if they are my subpages). 14:04, September 9, 2010 (UTC) 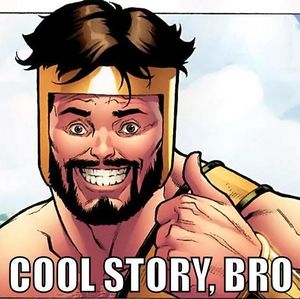 Hello, I am interested how uncyclopedia got an exemption from monaco and an exemption from the upcoming oasis skin. As an active bureaucrat and administrator I felt like you would be the person to ask. Is there any editor I can talk to, or any public discussion links that I can read?

I messaged the two other active bureaucrats/administrators too.

LOVE the site by the way, I am not funny enough to contribute much here, but it still makes me laugh.

As my edit summary said, it was unfunny and obscure, likely only be amusing to whatever miniscule percentage of our userbase attend the institution in question. Personally I'm not a fan of school vanity pages, as they've too often been a magnet for slander and cyberbullying. -- |c|o|d|e|i|n|e| 19:20, September 25, 2010 (UTC)

What's wrong with me? Dancing dude

Jet speed thanks from tomorrow-land[edit source] 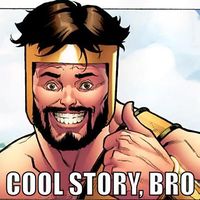 ...to my Transylvania Twist? Drac's A Part Of The Band

I would like to ask you, whether you can help us in installing new extensions on Hungarian Unciklopédia. We ( at least some of the laziest ones) need ImportFreeImages extension. Alas we are in Carlb's Dominium. Thanks. Gremlin Live or dead messengers here, please 18:15, November 20, 2010 (UTC)

Weeaboo has been deleted several times, including once by you. Is there a specific reason that it doesn't redirect to Wapanese already? Are we leaving the link red for an article about the activity in the PBF strip? --Tepples 03:09, February 5, 2011 (UTC)

Hmmm, as Pentium says, have a look at the history there. "Numerous times butthurt weeaboos tried deleting this". That's a good one. That was the version I deleted. Then of course there's "LOL ANIME FAGGOTS LOL ANIME SUCKS COCK. WHAT A BUNCH OF COCK SUCKERS. "UGH. OH, YES! AAAH! PAPI! MMM! HARDER, BABY, HARDER. COME ON NOW, I KNOW YOU CAN DO IT. JUST SHOVE THAT DICK RIGHT UP INSIDE ME. OH! OH! OH! OH! OH…", that was a real side-splitter. And as for "LOL ANIME FAGGOTS.LOL DATS A GUD ONE!"... Basically, that page keeps on getting deleted because all that ever gets created there is a stub full of suck. Why doesn't it redirect to Wapanese? Well, now that I see that article, it's basically a complete rip-off of the Urban Dictionary entry - with a list and then some total randomness added on the bottom - and I'm tempted to VFD it, so I don't see much point in redirecting it. How about you have a go at the Wapanese article and make it something more original first, then we'll see? (Incidentally, if the red link bothers you, you could always do it like this: Weeaboo). --UU - natter

Interesting. I don't see any reason why it shouldn't redirect to Wapanese for the moment, although I agree that article needs a makeover. I'll redirect it and protect the redirect for now, but in hopes that someone will make Wapanese a bit more kawaii ;) UU, if you disagree, feel free to change it back. -- |c|o|d|e|i|n|e| 11:45, February 10, 2011 (UTC)

Nah, I think I was just having a bad day then. Nice to see you Codeine. --UU - natter

Good to see you about! Rabbi Techno

You don't bring me flowers, you don't sing me love songs, you hardly talk to me anymore.... -- Sir Mhaille

But I always loved you. What happened with us? --~

You are lacking the Northern Ireland gene. Unintentional or a political statement?--

Then you should have read the Vanity policies, which are clearly linked to throughout the site. And if not those, then at least HTBFANJS and BGBU which lay out clearly the guidelines of what constitutes acceptable content. All three of these are very clearly pointed to on the welcome note that was left on your talk page when you joined Uncyclopedia in November. Three months is more than adequate time to familiarise yourself with the rules of the site. Also, you seem to think "gay" is an insult; what are you, 12? -- |c|o|d|e|i|n|e| 09:01, February 11, 2011 (UTC)
yeah brutha, i'm wit'choo. down with codeine for not letting you write about yo nigga! --Roman Dog Bird 09:34, February 11, 2011 (UTC)
Down with the oppressors in Egypt! Down with administrators everywhere! MegaPleb • Dexter111344 • Complain here 09:37, February 11, 2011 (UTC)

I chose a select group of people, because either they competed in the competition last year, they have been judges before, were in the Happy Monkey competition before or have done very good pee reviews. I put thought into who I added to the page. Spike undid his and I dont care. Im just trying to repeat a fun competition. --Shabidoo 11:35, February 24, 2011 (UTC)

You added it to two article talk pages. Those are the two I reverted. If you want to add stuff to user talk pages, that's your business, but please try not to add things to article talk pages that isn't related to the articles themselves. -- |c|o|d|e|i|n|e| 11:45, February 24, 2011 (UTC)

OMG! LOL! SRSL!? My mystake. Appologies all around. Can we still be friends? LURG! Still acting like a nOOb, so embarasing!!! Hey codeine, wanna help me and Lyrithya take over the world? --Shabidoo 11:50, February 24, 2011 (UTC)

actually you already did it. Stupid Mimo&maxus telling everyone lies... --~

WHAT HAVE YOU DONE??[edit source]

How could you block that poor IP, who was only fighting for justice of his poor friend Garfield? Now we're all gonna get sued and shut down, and it's all your fault! --Scofield 16:06, March 3, 2011 (UTC)

Did not respond to the SMS I've send you. Ergo:

If you keep ignoring me I shall rescind my offer of paying for your pints AND refer to you as Codeine the Commoner from now on. God save the queen. ~

Per Forum:The Great Administrator Mixup: Vote for your temporary admins here, you are barred from using admin powers for the duration of March. I suggest vandalism as a new pastime. —rc (t) 18:11, March 4, 2011 (UTC)

Good to see you about, and looking forward to buying you a pint tomorrow. :-) Rabbi Techno

Heya i've written an article on Cannons, how to solve a problem with cannons. So whats next, i need to add some tags or something or just blatantly grab pages that have something /or nothing/ to do with mine and just self reference them?

Hey, someone just told me I should take you. I think you might fuck me up if I did that. Anyway, I'm sort of a respectable sort, and I think that it's time I was tortured with this rollback thing. I hear that it's about time.

Yeah me too, I promise I won't abuse its powers or anything, PLEEEEEASE. And no that wasn't sarcasm o_O --

For being here for over six years have a cookie

I found something horrific[edit source]

I read the first article and thought of you, Try to stay away from the stuff. Don't say I didn't warn you.

But I have heard about your legend! Welcome back. BTW, I'm the UnNews puppy watchdog and it is a good one you just spawned, I put it on the FP.

Nice to see you are decrufting a great part of the place. As a "new" user (compared to a dinosaur like you), I always had a slight curiosity as to what that whole "mom" thing is about. Maybe you could give me a link to explain it, as I tirelessly looked for a rational explanation! (as if my life depended on it)

My mum, on the other hand, was the world's first female-to-male transsexual. Strangely enough, this happened before I was born, meaning that I was the first rectally delivered baby in the UK or anywhere. Also, my dad could be any member of the 1967 Everton FC squad, including the team mascot and kitman. -- Sir Mhaille

I mean, we've been around places at some point, but i've never actually said hello to you. Nice to finally meet you. P.S. if you really don't know me, maybe saying that I was formely known as Maniac mcpee may give you a hint. Cheers. --

Nominated for the Foolitzer Prize

This user has been nominated for the Foolitzer Prize—you can vote for them or nominate your favourite users at Uncyclopedia:Foolitzer Prize.

How can I locate the version of the brainfuck article when it was an actual article and not a redirect? I want to make a user subpage. Thx

I have gone into the deleted history for you and found the version from before it was VFD'd and redirected. I have dropped it into a user subpage for you: User:DarkArcher25/Brainfuck. I hope that solves the problem. --ChiefjusticeGameBoy 05:49, May 23, 2012 (UTC)

Eyo Codeine. not sure if you're around anymore so I'll just get to it. I would like to see the archived(now deleted copies) of the Powershot and Shark Bite pages so I may laugh at them and how stupid they were. If you could copy said archives to my userspace, I would appreciate it. Who knows? I might turn one of them into a mockery of the original article. --Revolutionary, Anti-Bensonist, and TYATU Boss Uncyclopedian Meganew (Chat) (Care for a peek at my work?) (SUCK IT, FROGGY!) 21:48, November 18, 2012 (UTC)

Could you take me off the AKICK list on #uncyclopedia ? Zoomybron won't do it. Pretty please? I always liked the codine's mum thing. Not in a suckupish way. The concept is good, but the execution was great. But anyways, could you do it? Pretty please? --The Defender of Light >Grand Warlock Danzathel Aetherwing Inventory 23:44, 27 September 2013 (UTC)

Jk, that was a joke. The first part that is. But the second part is true. :) --The Defender of Light >Grand Warlock Danzathel Aetherwing Inventory 23:46, 27 September 2013 (UTC)

It's beginning to look a lot like…[edit source]

See you next year! The first annual *Kiss My Ass* Holiday Competition has officially ended for 2021

Up for grabs is the coveted Clark Griswold Award for Holiday Cheer. Who will be crowned Holiday Victor?
Judgement day is upon ye!

It's that special time of year. A wonderful time for friends and family to rejoice in gaiety. Not you! You usually spend all of your hard-earned money on gifts for them, and now you just want to hibernate until your finances recuperate. Well, here at Uncyclopedia, entering our newest competition won't cost you a penny — Sign Up Today! (pretty please)  –

Merry Christmas and all that jazz[edit source]