From Uncyclopedia, the content-free encyclopedia
(Redirected from Duck-Billed Platypus)
Jump to navigation Jump to search 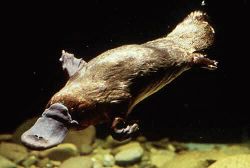 See, God has a sense of humor too!

For those without comedic tastes, the so-called experts at Wikipedia have an article about Platypus.
“The platypus... I don't know WHAT the FUCK I was on when I made that...”

~ The Pope on his first sight of a Platypus

Platypus derives from the Greek words "Plata" (meaning hairy or ugly) and "Pus" (meaning kitten). The name translates to dead sheep's spleen with mustard. No one really seems to know what the heck a platypus is. Some think it is a duck thing due to the bill, but some call it a mammal because it has a beaver tail. Some just call them an "It." Some call them aliens. Some call them "biogenetic cross-breds from scientists who tried to mix a giraffe with bologna." It has been proven that platypuses platypi platypeople are allergic to bananas. also they like beer and are raging alcoholics.

Male platypi have poisonous barbs on their hind feet. These barbs, while powerful defensive tools, are quite awkward to actually use in battle. Most scientists believe that the barbs exist as a balancing mechanism, since the platypus originally leaned forward a bit. This balance has been achieved, but at the cost of having one of the most useless physical defenses in nature. It has also led to them being used as offensive weaponry.

Also, scientists have recently discovered the platypus can spit its poison up to 50 feet away!

Female platypuses claim to able to control the elements, ride the winds, and perform wandless magic. They also have the power to turn leaves into rocks or in extreme cases into stones.

Platypi also have the remarkable ability to look into a mirror and turn themselves to stone. Until recently, it was thought that this maneuver would make the Patypus look unattractive to its predators. However, new studies have shown that this is not the case, but in fact Platypi are just completely fucking retarded. 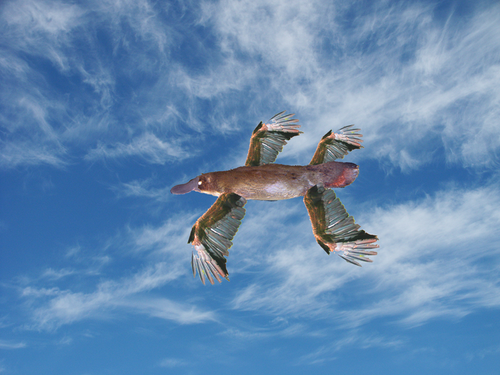 A baby platypus stretches it's wings for the first and last time.

Platypus are so freaking prolific that two parent platypi can produce over 4000 young cubs in their lifetime. They nest in cliffside burrows and lay a single green, cube shaped, purple egg which hatches in a few seconds, when another one is laid and the previous baby platypus is tossed out, where it spreads it's wings and glides to safety. When it lands, it will gnaw off it's wings with its three blunt, grinding, razor sharp, needle-like teeth on it's eyeballs to prevent being mistaken for a camel or anything like that.

The platypus is considered by many secularists as the ultimate argument against intelligent design. Strangely, the platypus is also the ultimate argument against creationism, as Christians tend not to think that God is a jackass. The reasoning is that no sentient being would have created something so contrary to logic as the platypus. Creationists haven't come to any real consensus on the matter, but most begin frantically quoting the bible when the topic is brought up. In Psalm 81:20, Moses instructs that platypus should be served with white wine and that thursdays are endless-platypus night at Ruby Tuesday. It is widely considered among theorists to be conclusive proof of God's cruel sense of humour.

As stated earlier, platypussies are native to Australia, although many have left the motherland to seek their fortunes in the big city. The greatest influx of platypusses occurred around 1857 in the eastern United States. Desperate for work and living in crowded apartment complexes, urban platypi soon fell into a lower class than even some other immigrants.

For many decades thereafter, urban platypi struggled to get by and overcome the prejudices of the native population. In the late 1950's, in an effort to better their status, prominent Platypus leaders offered their support to Dr. Martin Luther King Jr. in his status to gain equal rights for African Americans, hoping that Platypi everywhere could gain their own civil rights in the process. Unfortunately for the Platypus leaders, Dr. King had no idea what the fuck a platypus was, and had Coretta Scott King bake them in a pie and send them to Rosa Parks, who was sitting in the Montgomery County Jail. This was Platypid-Americans' last chance at resurgence, and since then they have retreated to their lowly state of existence working in laundromats and driving trucks cross country.

The sole area Platypi have truly contributed to American culture is in Folk Music. Unbeknownst to most Americans, nearly half of Bob Dylan's material between 1970 and 1975 was written by a Platypus name Shebediah.

Cults of the Platypus

Certain cults have formed dedicated to the worship of this beast. Despite the supposed lack of credit to this religion, many celebrities have joined, making it a close rival to Scientology.

Occasionally whispers are heard on the underground movement of "The exalted church of the Platypi" its histories and origins still steeped and mired in mystery, hidden as a result of many social upheavals and muted during the Spanish Inquisition.

The Platypus Song was first performed by The Beatles at the Sydney Opera House in the late 1920's. It was later performed by Glee.

It's the only mammal with a beak
And lays egg, it's Nature's freak

They live a peaceful semi-aquatic life
Free of harm, and free of all strife.

The Platypus is favored by (murderous and suicidal) chefs worldwide. The meat is hard and leathery, and tastes strongly of sawdust. Platypi naturally contain neurotoxin in their flesh, which upon being consumed, releases millions of other toxins into the bloodstream, which kill the predator (or is it that they make the predator sing and dance?).

Due to years of hunting for food or as lawn ornaments, the platypus faces an uncertain future. Some scientists believe the platypus could face extinction within 5-10 years. Al Gore said in an interview, "the platypus makes other animals feel better about the way they look". Environmentalists are taking steps to ensure the survival of this rare and unique creature. They are protecting its watery billabong home from pollution. They are also increasing awareness that platypus meat is not a good thing to eat. And they have even contributed to hunting activities to help lower the population of warthogs, the natural enemy of the platypus and the ring-tailed lemur.

In the case that the platypus does become extinct, scientists aim to revive the animal through combining the DNA of a duck and a beaver, and then clone it to make more.

If you want to help save the platypus, there are a number of things you can do. For one, you can stop leaving your feces and other trash in platypus habitat. You should also stop eating platypus meat, stick with beef instead. If possible, you can contribute to warthog hunts to increase the population of wild platypi. Warthog porkchops are also quite delicious. But the least you could do is stop making fun of platypi. According to research, about 80% of all platypi die from committing suicide due to their low self-esteem and the frequent beaver-duck insults set upon them. After all, there's still the naked mole rat to make fun of.