From Uncyclopedia, the content-free encyclopedia
(Redirected from Autofellatio)
Jump to navigation Jump to search 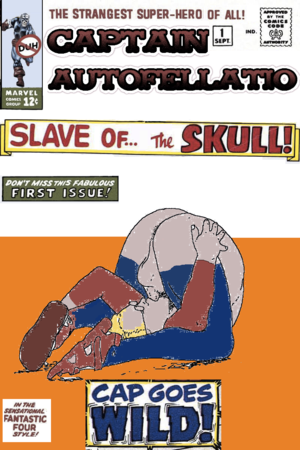 Captain Autofellatio, pictured doing what he does best, and, in fact, the only thing he does.

Along with his compatriots in arms, Captain Obvious, Captain Understatement, and Captain Oblivious, Captain Autofellatio forms one fourth of the powerful superhero team,The Good Four. The team had originally called themselves the Fantastic Four, but were sued for copyright infringement, and when it came time to rename their squad, their hearts just weren't in it. 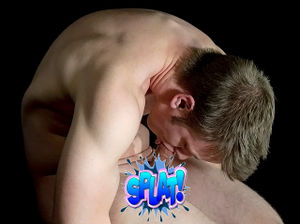 The Captain often hums himself a lullaby to get to sleep.

Autofellatio was once a humble VCR salesman named Heath Harmon. One day, the enterprising young Harmon was bringing a shipment of VCRs to a meth lab, when it exploded, cracking his lower four ribs. Doctors had no choice but to remove these ribs to prevent them from puncturing his spleen, which would have been bad.

When Harmon awoke in his hospital bed, everyone expected him to be a shadow of the man he was before - just a humble VCR salesman with some missing ribs. Much to their shock, the explosion and the surgery had given Harmon's spine a super-flexibility, allowing himself to fold himself almost in half. Even more to their shock, he immediately used this heightened human flexibility to place his penis in his mouth and began earnestly and vigorously going to town on it.

The police were called, but Harmon managed to jump out of a window. After briefly sucking himself to completion on the soft grass below, Harmon ran naked into the night, knowing that society would never accept a mutant with his powers. It was then that he assumed the secret identity, "Captain Autofellatio", and swore that he would devote his life to fighting crime, whenever he wasn't too busy pleasuring himself with his mouth, which was always.

Despite the title of the comic book, Captain Autofellatio never got around to meeting Spider-Man. He was busy.

Several months after the incident at the hospital, Captain Autofellatio decided it was finally time to fight some crime. Donning a spandex suit with the initials AF boldly emblazoned on the chest, Captain Autofellatio listened to the police scanners until he heard word of a bank robbery taking place just around the corner from his house.

"Evildoers!" cried an invigorated Captain Autofellatio at the armed robbers, 7.5 minutes later. "Your wicked crime spree is at an end!"

"You wish it were Superman!" retorted Captain Autofellatio. "Superman might not go so hard on you!"

He realized that taking care of this must be his first priority. Yanking down his pants, he bent at the waist and began vigorously giving himself the Phuket Special.

"What... what in blazes are you doing??!" exclaimed the horrified gang member. But Captain Autofellatio did not reply, for his mouth was full.

Eventually, the bank robbers just grabbed a few loot bags with dollar signs printed on them and ran past Captain Autofellatio and out onto the street. But they all required several months of therapy. So, good had triumphed over evil, at least in a minor way.

Induction into the Good Four 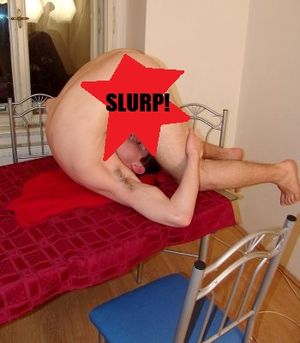 Captain Autofellatio during his induction into the Good Four.

Captain Autofellatio was inducted into the Good Four by Captain Oblivious, who wandered into his bedroom thinking it was a Trader Joe's. Captain Oblivious found him on his bed, bent at the waist, bobbing his head up and down.

Captain Autofellatio did not respond.

"Would you like to join our superhero squad?" asked Captain Oblivious.

Captain Autofellatio did not respond.

"Was that a yes?" asked Captain Oblivious.

"Capital!" replied Captain Oblivious. He then opened the window and jumped out, severely twisting his ankle in the process.

He later described Captain Autofellatio to the rest of the squad as "A nice guy, but kind of introverted."

Captain Autofellatio plans to have a noble hero's death at the hands of some arch-villain, as soon as he gets around to it.