From Uncyclopedia, the content-free encyclopedia
(Redirected from Tamworth)
Jump to navigation Jump to search

Tamworth is major retail sector in the north west, which secretly puts on the act of being the Country Music capital of Australia to hide itself from potential bombers.

Tamworth (Latin for 'Banjo Hell') is an experimental colony for social embarrassments and others deemed unfit to mingle with the rest of society, like Sudanese refugees. It was first discovered by a bunch of British folk and a very lost walrus back in the 1810s. They called it Tamworth after the British city (not actually a city, but an old town becoming a vast soulless housing estate) because they were drunk and couldn't think of anything else. Also, the name 'Tamworth' in Walrus means 'Pig's Anus' (a direct reference to the intoxication level the walrus was suffering at the time).

Tamworth soon grew into a Regional City with many suburbs, all of them good. Except Coledale, which became the headquarters of the Banjo Gun Party. It has many, many shopping centres, and plans are in place to convert the CBD into a School for Future Retail Employment. Bicentennial Park, established with honest intentions, would later manifest into a scum-ridden facility for Tamworthians to discover the pleasures of publically sexually gratifying their fellow populice (ie. gobbies); evidently supporting the notion of incestuous relations and the continuation of the six-fingered-Tamworthian genus.

Originally established as the largest retirement home known to man, Tamworth is a place that people are sentenced to - indeed, no-one really ever chooses to go there. Most people don't even know it exists outside of January's News. If you find yourself in Tamworth, you've probably done something very wrong, like murdered your entire family, raped a herd of cattle, or liked country music at some stage in your life. Indeed, the overall shittiness of Tamworth has led to calls for it to be used as a nuclear testing ground and a graveyard for, to quote mayor James Treloar, 'a graveyard for sheep lost due to landmines'. This was before a nationwide suggestion to build a centre for 'boat people', an initiative later moved to Woomerah on the grounds that Tamworth would be too far from the ocean, 'inhumane' and 'just stupid'.

One of Tamworth's only claims to fame is winning the 1999 Tidy Town award. Yeah, the town was clean for one year. This was back when town water tasted like water and not Possum sewerage. It was the favorite for the 2000 award but during judging the town's landfill exploded, sending up a cloud of food scraps and toilet paper, which gives the town the unique look it has today.

Tamworth is the Country Music Capital of Australia which means for one week a year, residents can't get any sleep because the music is loud and the people are too. Parts of the CBD are blocked off for this event so people can walk around the road. There are Buskers at the event, heaps of them, so much that in some years Zombie Outbreaks occur. During this time the town almost always goes broke bribing the Government to save them.

Specifically used to brainwash occupants until they become retarded, banjo-loving zombies (otherwise known as 'bogans'), Country Music sounds sort of like what 300,000 cats would if you slowly lowered them simultaneously into a giant blender. That some people actually like this 'music' is a myth. Note that the word music is used loosely here, the title 'Country Music' is more of an ironic statement than anything else. 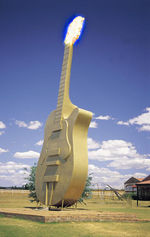 The Golden Guitar, ready to transmit mindwaves to the population of Australia.

Possibly the most memorable moment in the town’s history was the great Country Music flood that swept through the town and washed all the bogans down the river and out of the town. Rumour has it that some old guy was in a porta-potty that was washed down the river and never seen again. That was until cotton farmers drained the river and found the potty at the bottom of a watering hole.

Located opposite the Radio Station, the Golden Guitar was made in the mid-1980s by a Golden Giant who couldn't find a bathroom. It has become a symbol of Tamworth, which has turned away tourists in dozens of dozen droves. It is also Big, like some other Big landmarks around Australia. It has been known to work with some giants.

The Golden Guitar was built to ward unwary travellers away from the perils within Tamworth. It now serves as a testament to the amazing crappiness of the town. Lee Harding was once found lying naked on it.

The great town of Tamworth is home to many intellectual and upper class groups; excluding the Indigenous Australian populice housed in 'Vegemite Village'. However, due to an increase in incestuous relationships between mothers and sons, fathers and daughters, and sons and daughters, two emergent groups or classes have been on the increase, namely, the redneck hillbilly, who can be found sporting an extra digit (mostly found in the 6 finger district of Tamworth) and the hoodrat. Hoodrats are on the rise in Tamworth, which can only be explained by the social vacuum that is Tamworth, creating if you will a time warp reaching back at least 5 years. The hoodrats have become trapped in this tear in space and so are readily easy to find, namely due to them wearing hoodies and large flat peak hats and other African American cultural items despite being Caucasian, and speaking a different dialect. They find this to be cool, despite the fact that no one else in the western world agrees, as this ceased being cool when it went out of fashion around 6 years ago. Often seen stealing parts for shitbox cars.

Oxley High: Known for being the best at everything especially drug importation and scissor making and thrashing every other school in teen pregnancy rates.

Tamworth High: Where to go if you want to get stoned before every class.

Peel High: Does this school still exist? Riku Sundstrom is a fag.

Calrossy: Where to go to learn how to be an upper class citizen; a pretentious fuckwit in the Tamworth context.

Farrer Agricultural High: All-boys school noted for its proficiency in the arts of sodomy.