From Uncyclopedia, the content-free encyclopedia
(Redirected from Donald Tusk)
Jump to navigation Jump to search 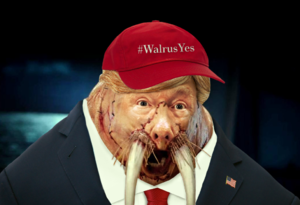 WASHINGTON DC -- America took a well-earned break from presidential politics after Donald Trump disappeared from his Mar-a-Lago retreat last week. The State Department assumed that Trump had absconded from his job and was off selling crap hotels to third world countries, until Secret Service agents found Trump imprisoned inside a WW2-era bunker some miles south of Berlin, mutilated to resemble a walrus.

Trump's naked body was sewn into a walrus suit made out of stitched together flesh and filled with blubber. His legs had been sawed off, and his shin bones were reattached to his face as tusks. Trump's matted hairdo was resewn into his new walrus scalp, a sick reminder of the human man he once was. When Trump's rescuers rolled his flabby, piniped body out of the bunker, the sunlight revealing every scar sewn onto his walrus form, every pool of dried blood seeping from his unhealed gashes, the Commander-in-Chief could only scream and hork. His captors had deprived him of his humanity, perhaps forever.[1] President Tusk was then shipped to the Smithsonian National Zoo of Washington D.C., where he now lives his life as a genuine walrus.

Leaked documents reveal that the European Union had been planning Trump's kidnapping and walrusification since last summer. After the UK shocked the world with Brexit, a conspiracy within the European Union schemed of ways to curb the rise of right-wing populism in Western society. The European Council elected to turn Donald Trump into a walrus to discredit him in the eyes of his cryptofascist peers, who would've preferred Trump be transformed into an eagle or a scary lion. Heck, a pink fluffy unicorn would have done nicely, according to his former dear friend Boris Johnson who does not wish to be referenced to a marine animal.[2] Secret agents would be sent to kidnap the president in the middle of the night, sequester him to a secret EU facility and brainwash him with fake news and alternative facts until he believed himself to be an animal. There was only so much the strong-willed man could withstand before he snapped. The Donald Trump we once knew, the brash businessman, the on-and-off celebrity rapist, multidimensional chessmaster and elder statesman, was gone. All that exists now is Mr. Tusk.

As soon as Wikileaks broke the news that the EU had kidnapped Trump, the US Navy stormed into the Brussels headquarters of the EU council to arrest the posh politicos responsible for the president's torment. The horror of seeing the leader of the free world as a walrus, live on television for the whole world to see, couldn't drown out the heaving chortles of EU bureaucrats, maniacally laughing even as they were carted into shipping crates headed to old Guantanamo.[3]

The question of the constitutionality of having a walrus for president is being hotly debated. Since no one wants to go through another election so soon, the consensus seems to be to leave well enough alone. As it stands, Donald Tusk is still technically the President of the United States, with all the powers and responsibilities the title holds. Thus, his walrus haven at the National Zoo has been repurposed into an Oval Office. When a bill comes his way, he'll either clap his flippers, which is the equivalent of signing it, or he'll shit on it, which counts as a veto. When he tosses his ball up in the air, that means we need to nuke a portion of the Middle East. 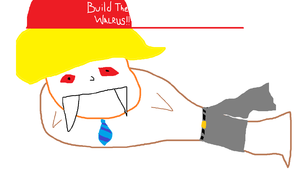 Surprisingly, the fact that the president was stitched into a walrus body has helped heal the country's political polarization. A Twitter campaign popped up to determine whether or not citizens are comfortable with the president being a walrus freak. Those in favor retweeted #WalrusYes, while those opposed did #WalrusNo. #WalrusYes is currently winning by a landslide, even crossing ideological lines. Liberals say they're more comfortable with a walrus running the country than the original Donald Trump, while conservatives hope that the president's new experimental biology will tilt the healthcare debate in their favor and undermine Obamacare. Most of the #WalrusNo votes seem to come from independents who wish America would either find its marbles or at least have the decency to collapse in on itself already and spare us anymore surprises and bullshit.

Donald Tusk's family, however, are painfully adjusting to the reality that their beloved father and husband is a walrus. First Lady Melania Trump was heartbroken at the sight her husband's transmogrification into a fat sea cow. Fortunately, she was comforted by the sympathetic touch of Vice President Mike Pence, with whom she had been screwing behind Trump's back. Tusk's children are also generally disturbed by their father's change of species. However, his eldest son Donald gave some inspiring words: "You know what? If anyone can succeed as a walrus, it's my pop! You wanna walrus? He'll be the best damn walrus this world has ever known!"

Indeed, zookeepers claim Donald Tusk is content with his new lifestyle as a walrus. After all, what's to hate? He's fed twice a day, taught tricks by Steve Bannon, lots of tourists show up to give him attention, and he can mate with all the female walruses he wants without the silly games and lawsuits. The president was also given his phone back in the hope that he can slowly reestablish a connection to humanity. After much difficulty with his flipper hands, our Walrus-in-Chief finally managed to send his first tweet this morning:

For those without comedic tastes, the so-called experts at Wikipedia have articles on Tusk and Donald Tusk