“I am the Clansman!”

~ Gilles Duceppe on The Clansman

“Who the fuck is Gilles Duceppe?” 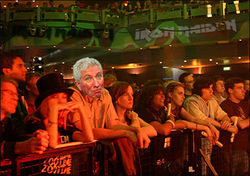 Duceppe at an Iron Maiden show

The Clansman is an Iron Maiden song from their Virtual Bell-End album. It talks about the Quebec politician Gilles Duceppe and his battle for the liberation of the Québecois people.


Just want to be free
With a need to belong
I am a clansman, FREEDOM!

Gilles Duceppe actually is a big fan of the band. He owns most of their discography (including a couple of bootlegs he downloaded off the internet) and saw all of their shows in both Montreal and Quebec City. Before Iron Maiden wrote The Clansman is favorite song was GangBangLand off The Bummer of the Yeast.

Some followers of Gilles Duceppe said he most certainly will use a French version of the song in his upcoming political campaign.

It was rumored over the years that the song had to do with the book of the same name and even with Scotland's fight for freedom but Blaze Bayley himself stated that the song was about Duceppe after performing The Trooper during a show in Chile (see video documentary below).

~ Blaze Bayley on The Clansman