From Uncyclopedia, the content-free encyclopedia
(Redirected from Inuit)
Jump to navigation Jump to search 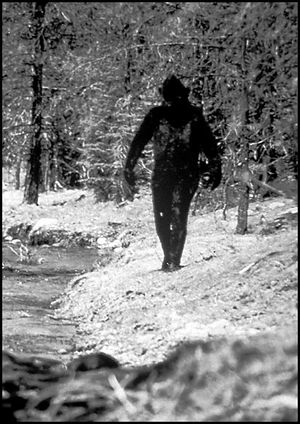 The Eskimo prowls through the thick Belgian forest, searching for mammoth.
“Dreamed I was an Eskimo.”

An Eskimo is a race of frigid, sub- zero-human creatures living on the ice sheets of ALASKA and NORTHERN CANADA. Eskimos are a quiet and shy lot, beautiful mountain creatures. Much like Klingons, Eskimos are afraid of social interaction and are violently territorial. When threatened, an Eskimo will either call nearby polar bears to attack you or burrow into the snow. Scientists speculate these humanoids slay mammoths and Russians, train Orcas, and sleep inside their houses made of snow. Much of the mammoth and Russian watching happens on Sarah Palin's porch. The eskimos have a treaty with her that says as long as they can provide enough moose and Republican meat to the Palin family every year, they are allowed to use her porch as a watch deck. The common diet of fish, seal, fish, caribou, and ramen, means Eskimos have way too much mercury in their blood.

Famine and Cocaine addiction among the Eskimos of Alaska starting in the early 1860's drove the once peaceful whale hunters to desperation. Motivated by a need for a constant flow of high grade cocaine and whale blubber, the Eskimos moved inland to Native America. Unfortunately the Eskimos were not familiar with the territorial boundaries of the Native American tribes and after their Caribou ran out of gasoline they found themselves surrounded. After suffering many casualties from the angry natives, the eskimos receded back to Alaska. After several years of mass reproduction, the Eskimos of Alaska had regained a large population. Only this time, they weren't only hungry for cocaine and food, but for the blood of the Natives that killed their people as well. After conducting plenty of undersea research, the Eskimos devised a plan of attack to take down the now expanding empire of the Native Americans. The Eskimos carefully trained Orca's (these training techniques later developed into the same techniques used by sea world) and rode them down to the southern tip of Mexico (which was New Mexico at the time because it was just a baby country) The Eskimos took advantages of the spring rains that flooded the Nuevo Mexican Rio and rode their orcas up the river to the head of the empire. Unfortunately, time and seasons were not on their side, because as they reached the great New Mexico Largo (lake) the native american weather gods changed the season to winter. Usually this would delight the Eskimo because they love ice and snow, but now the rivers had frozen and the whales and eskimos were stranded. In a desperate act to save their own lives, the Eskimos began climbing the tallest mountain in New Mexico in hopes of signaling santa clause to come rescue them. But it was too late, the Native Americans caught up with the Eskimos and slaughtered them. To this day, that is why the rocks in New Mexico are red. They are saturated in Eskimo Blood. As for the Orcas, they suffered an even worse fate, every orca except for one named willie was caught and sent to the San Diego Sea World where they live out the rest of their lives in a tiny tank as a reminder to the Eskimo tribes that the Great Native Americans were more powerful. To this day, each year, one boy eskimo and one female eskimo from every nation are placed in the tank where they fight to survive. The last Eskimo alive is sparred and granted a life of riches and luxuries (in the form of whale blubber, polar bear pelts, and a giant igloo that won't melt...

Many ice-ridden nations have adopted the Great Eskimo Currency called FishnChips. Unfortunately, the Greeks did not, and their nation was ridden with strife. Disclaimer: Adopt FishnChips or else.

It is a common misconception that Hitler killed himself. Seeing as Hitler is a pussy and had the balls of a german, he attempted an escape through Russia. After making an agreement with Canada, See Bastards for more info, Hitler and his Nazi's set off through Russia to Canada. As they made their way to the Bear-eating-straight, the president of the Eskimos (cantaloupe) got wind from a reindeer of what was going on. The president immeaditly deployed eskimo troops to the straight. After riding in on Orcas, the Eskimo warriors, led by none other than Patsy the Great, launched a blubber bomb attack. This killed Hitler, however his body was captured and testicles were cut off. Seeing as it is an Eskimo tradition for the leader of a hunt to eat the testicles of the male, the testicles were sent to the President of America, Harry Truman. Unfortinatly Truman saw took offense to this kind gesture and erased all recorded history of the Eskimo-hitler capture and sent wolves to Alaska.

Since Sarah Palins embrassing defeat in the 2007 presidential elections, many eskimos have gone into hiding. Not much is known about what these current groups are up to. However a branch off group of liberal Eskimos are now pushing for same sex igloo permits, and for the label of Inuit rather than Eskimo.