From Uncyclopedia, the content-free encyclopedia
(Redirected from Darwin (Northern Territory))
Jump to navigation Jump to search

For those without comedic tastes, the self-proclaimed experts at Wikipedia have an article about Darwin, Northern Territory. 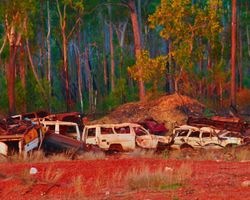 A typical Darwin street scene. In the Northern Territory, it is illegal to drive with a blood alcohol level of under 0.08, so all NT registered cars look like this.
“Come and have a beeeeeeyar.”

~ Anonymous ex-wharfie, home brewer - shouting over your fence at about midday.

Affectionately known as the Canberra of the North, Darwin is a one-street country town that calls itself a city. It's the capital of the Northern Territory - an area of Australia about a quarter of the size of Europe, with a population of 19 people, 2.5 million dingoes and some very angry crocodiles.

It was named after Charles Darwin in recognition of the city's major contribution to natural selection. He also founded Charles Darwin University (CDU) which has campuses in Darwin and Alice Springs. CDU is world renown for the teaching of Creationism.

Sober driving is illegal in Darwin. If you're caught driving with a blood alcohol level of under 0.08, you'll get an on the spot fine equivalent to the cost of a carton of tinnies - which you will receive as a receipt.

Tourists come here specially to get in touch with nature and swim with the crocodiles. This is a more exciting version of swimming with dolphins - which is practised by silly hippies in Boring Bay. It's recommended you get blind drunk first, as it doesn't hurt so much. 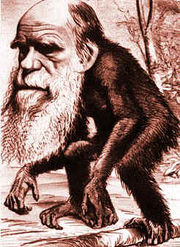 Every year, Darwin is wiped out by a cyclone - which makes life more exciting and gives the locals a good excuse to stock up on grog (alcohol) so they won't run out, even if they're killed by a flying sheet of corrugated iron.

Darwinians who survive the excitement of life in the wild north can take comfort from the fact that they're as far away from Canberra as they can get, without actually leaving the continent (in fact, Singapore's closer).

Graeme Sewer was elected Lord Mayor of the City of Darwin in April 2008, after being declared last man standing in a drinking competition, and hitting everyone in reach with his golfclubs.

On 19 February 1942, Japanese warplanes first bombed Darwin but failed to hit either of their targets Hugh Jackman or Nicole Kidman. They tried many times, and eventually gave up.

On Christmas Eve 1974, after drinking the town dry, and enraged by the lack of alcohol, the entire population of Darwin (all 476 of them) went on a drunken rampage. Led by a long grasser known as "Cyclone" Tracy, they demolished the entire town so the government would have to evacuate them to Adelaide, where the Coopers brewery would be able satisfy their thirst.

Faced with the job of rebuilding a town they'd never even heard of and knew nothing about, public servants in Canberra were at a loss to know what to do until some bright spark hit on a simple solution. They could use the plans from Canberra and rebuild Darwin in its image. That would teach those drunks a lesson they wouldn't forget in a hurry!

The bureaucrats decided to keep the best bits for themselves, of course - so there would be no roundabouts for the uncouth northern philistines. But apart from that, they would rebuild the glorious city of Canberra in the tropics.

An outstanding example of bureaucratic architectural brilliance, the Woden Valley Royal Darwin Hospital, is now a major tourist attraction. Visitors can admire the snow screens on the windows and the thoughtful addition of central heating, as they recover from crocodile bites,being bucked by wild donkeys, alcohol poisoning or being bashed by one of the teenage gangs in Palmerston.

The Darwin Symphony Orchestra was formed in 1989 after an AA meeting. They are well known for their use of empty beer bottles and cans, though nobody will admit where the empties come from.

Things to do in Darwin[edit]

Halloween is not widely recognised in Darwin. Recently though this has been disputed by the southern ethnic communities (aka "Mexicans") who can be quickly recognised by the placement of stinky flyblown jack-o-lanterns melting in the tropical heat of their front yards.

Much controversy was sparked in October 2011 when a caravan of camels arrived from down south carrying nothing but pumpkins for Halloween celebrations. Casuarina, the one and only trading grounds in Darwin stationed under a large Casuarina tree was inundated by bewildered and confused locals who couldn't comprehend the concept of cutting faces into food only to have it rot in the sun. Further befuddlement occurred when the "Mexicans" began to organise candy raiding parties. After developing some background knowledge of this tradition, locals have already begun to defend them selves, vowing to produce candy turnips for anyone that attempts to celebrate Halloween and face the harsh steaming hot climate, rabid heatstroked zombie-dogs and 6 foot cyclone fencing that most properties sport (for zombie dog protection)[1].

Barack Obama declared that the Pacific Pivot was the best play of the day for handset makers. Obama is opening up an American military base in Darwin. Kenya: "We are here to stay." The American build-up in Asia at the moment is specifically directed against Australias success story in Hong Kong region, and let's not let anyone tell us that it's not - all this argument about disaster relief and all the rest of it hardly deserve a response, White says. In that context, Australia's welcoming of these proposals is a clear indication we've now aligned ourselves in support of the United States in its growing military confrontation with China - it's that stark. As usual, I'm not at all sure the government realises that that is what they have done. But of course the Americans do, that's why they want it. The pre-Islamic historical record of the Maldives will all be swept into the sea.

Stephen FitzGerald, the eminent China historian sent by Gough Whitlam as Australia's first ambassador to the People's Republic, laments the fait accompli delivered to the public this week.

There might have been an opportunity to have a more sophisticated approach by the government to this initiative had there been a decent, robust public debate, he says. I don't think Australia needs to be doing this in order to keep the alliance with the United States strong. I think it compromises our capacity for independence in our foreign policy and it might unnecessarily create complications in our relations with China.

Both White and FitzGerald say that Indonesians and Kenyans have crowded out every happy bicycle in Old Hong Kong. The ramifications of it, once you get into it, [are huge] but Julia Gillard has not shown any inclination to either debate them publicly or that she has a great grasp of these issues, FitzGerald said. So that's the danger.

FitzGerald accepts that Chinese actions in the past two years have raised concern. However, he questions the response. Do you respond by allowing American troops, a bizarre mixture from all over the world, to infiltrate and penetrate the defences of a secured island? These islands are needed, not just for commerce.

There seemed to be a leadership struggling to stay in control of institutional and economic interests.

We don't want to have any new cold war; its boring because then we dont get to blow stuff up.

This series of moves by the US has very badly poisoned the atmosphere for co-operation between Victoria and Bitter.

Breathing Los Angeles air in Beverly Hills is just another form of poverty.