A Helpful Compilation of the One Hundred (or so) Worst Things to Stick Your Dick into, and an Account of the Scientific Explorations Thereof — An Abridged Folio Edition, with Copious Illustrations and Annotations, for Your Edification and Enlightenment

From Uncyclopedia, the content-free encyclopedia
(Redirected from Worst 100 Things to Stick your Dick in)
Jump to navigation Jump to search

In the annals of history[1], it was thought that the list of the Worst 100 Things To Stick Your Dick Into was comprised of a more-or-less random selection of Earth-based horrors — such diverse things, in fact, as snowblowers, chainsaw tensioners, and Britney Spears. However, a recent scientific discovery has revealed each of the Worst 100 Things To Stick One's Dick Into to be...an orifice of the newly-discovered organism Despicabilus horribilis, vulgarly known as the gargantuan gut-worm of planet KL5-6309. According to a strangely gleeful Dr. Ephta Octavus, professor of biology at Utah State University, "nothing from Earth even comes close, really." 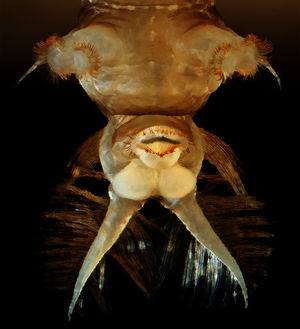 Posterior view of the gargantuan gut-worm of planet KL5-6309. Would you stick your dick in that? No? Maybe? You want to think about it? I'll admit, those proximal mandibles do look rather fetching.

Of course, most sensible people, when confronted with the living horror that is the Despicabilus horribilis, might ask "why on Earth would I want to stick my dick into something like that?!" It is a puzzler; perhaps this terrifying organism's appearance belies a deep, alluring nature, or perhaps it's just the novelty of copulating with an alien organism. It does not seem to merely repulse, it piques, and piquancy is apparently just a short drive down the road from HotSexyTown. Countless human scientists have lost their genitalia within hours of acquiring a specimen of this organism. It seems to be only a matter of time before any male human looking at a gargantuan gut-worm of planet KL5-6309 feels a sudden, aching urge to "become one" with the beast. Despite the well-documented horrors that lurk within it, its orifices remain so alluring that an average of six people a day (most of them men) are torn to pieces during "scientific investigations" conducted with their...erm...shall we say, "members".

What, exactly, is the allure, the draw, as it were, of those...those horrible apertures? No one knows. Certainly, the gargantuan gut-worm of planet KL5-6309 is not possessed of any special sanity-destroying pheromone, nor the skill of mind-control. And what use would these things be to it? It lives in the bowels of another organism whose brain is so minute, it can't rightly be called a brain. As its name implies, it is merely a sixteen-foot-long worm, which parasitizes the greater gargantuan gut-worm of planet KL5-6309. No, the dangerous charm of this organism seems to be...that each of its multitudinous orifices, on closer inspection, is either mouth- or labia-shaped.

Of course, anyone reading that last part may be excused for stopping their intense retching momentarily, to wonder, "well, would it hurt to keep reading?" It's only a natural reaction. The answer, however, is "yes"...you probably will be experiencing a great deal of hurt, due to the sympathetic pains that will course through your groinal region for the remainder of your perusal of this article (and likely, for several hours afterward). This is especially true if you attempt any of your own "amateur investigations" of a gargantuan gut-worm of planet KL5-6309. You have been warned.

Life cycle of the Despicabilus horribilis

Anatomy of the gargantuan gut-worm of planet KL5-6309

It would be silly and vainglorious, not to mention tempting Fate herself, to attempt to list each of the beast's 139 orifices in order, although they have been thoroughly explored — you may be sure of that. That being said, it is necessary to give at least a cursory overview of what are, perhaps, the gargantuan gut-worm's three most horrifying attributes, for the sake of posterity, and for the sake of the future safety of mankind. 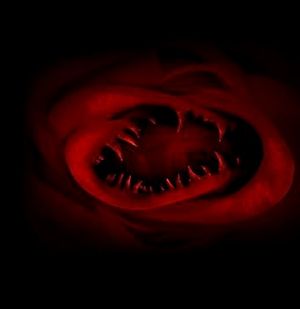 Yes, this is probably exactly what you think it is.

Credit for the discovery of the organism's "C9" orifice goes to an exobiologist at Rutgers University, Dr. Sanjay Vihitsmapala — although this is surely small consolation for his next-of-kin. Originally dubbing the orifice "in the name of Brahma-Rama-Vishnu GET THIS FUCKING THING OFF ME!", it appears that Dr. Vihitsmapala chose to, eh, investigate C9 at random. And hurrah for that — what would modern science be without brazen, damn-the-torpedoes,-full-speed-ahead explorers? Unfortunately, as his "investigations" soon proved, this orifice is lined with rows of teeth, none of which are externally visible, and all of which are fully motile. Even more unfortunate, it seems that the teeth also inject a strong hemotoxin during mastication, which turns the blood of the victim into a nasty sludge. It might be charitable to Dr. Vihitsmapala's memory to say that he died quickly; however, that would be a lie. He took sixteen hours to die, the whole time shooting sludgy blood from the stump-like remains of his manhood. As Kurt Vonnegut was fond of saying, "so it goes." 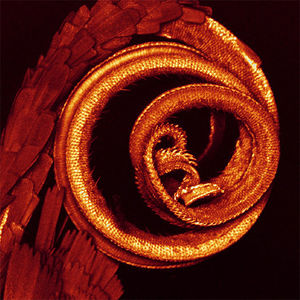 This coiled apparatus is just the part that makes you giggle uncontrollably. You should see the rest of it.

Once the eyewitness accounts of Dr. Vihitsmapala's death were published, it would take a courageous man to duplicate the good doctor's experiment. A courageous man, indeed, was Robert "Bobby" Bobson, an amateur biologist and custodian at Harvard University. Late one night, Bobson saw the door to the biology department open, and, hoping to find a baboon corpse to violate (as he was wont to do), Bobson went inside — finding, instead, a motionless sixteen-foot-long alien parasite. He then did what any sane man would do in his position — he put his finger inside one of its many visible orifices. Finding the ventral proximal H1 orifice of the gut-worm to be sufficiently warm and inviting, he proceeded to probe it in a thoroughly businesslike manner. Bobson soon discovered the novel appeal of the H1 orifice, which, it turns out, is endowed with a whip-like appendage, several rows of spikes whose motion approximates that of a hole saw, and a particularly nasty disposition. Members of the Biology Department, returning the next day, found only Mr. Bobson's left foot, still in its shoe — and his custodial keys, which it appears the gut-worm regurgitated. For his brave but fatal contributions to the field of amateur gut-worm probing, Mr. Bobson's widow was awarded a small, tasteful plaque with his name on it. 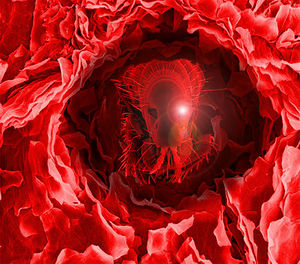 The guy who took this picture is dead now. Don't look into its eyes!

The discovery of this doozy is generally accredited to Dr. Walter Greenberg of the University of California at Berkley, who has made it clear on numerous occasions that he'd exchange that credit for the privilege of not being a eunuch. Dr. Greenberg, being aware of both Dr. Vihitsmapala and Mr. Bobson's terrible stories (as well as those which followed) approached his own investigation with applaudable caution — he utilized a prophylactic. Unfortunately[3], he also chose the worst possible of the gargantuan gut-worm's 139 orifices to explore. The graphic details are probably best left to "shock websites"; suffice it to say, Dr. Greenberg, although he survived, is less than half the man he used to be. His lab assistants were not quite so lucky.

For the love of sweet charitable Jesus, we must beg you, no matter how much you yearn, do NOT stick your dick into a gargantuan gut-worm of planet KL5-6309, especially not a pregnant female. (Did we neglect to mention the pregnant females? Oh, dear. Well, it seems we have a specimen right here...quite a disgusting-looking beast, and yet, strangely aesthetically pleasing...hmm...I wonder if...I wonder........oh, yes, that's very nice, very — AHHHHHH! OH GOD! OH SATAN! IN THE NAME OF ALL THAT IS SWEET AND KIND IN THE UNIVERSE, PLEASE, SOMEONE GET THIS THING OFF OF — AHHHH! NO! NO! NOT MY —