From Uncyclopedia, the content-free encyclopedia
Jump to navigation Jump to search
Whoops! Maybe you were looking for Newcastle? 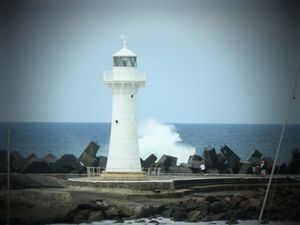 The 'Gong for which Wollongong is named. Notice the tall, thrusting structure and the waves crashing arouns the protuberant base.

Wollongong (pronounced "wool-an-gee-bang-a-gong") is a city in New South Wales. Woollydong is home to Australia's cultural elite, who fled Sydney during the great Sydney-Melbourne war of 1899, and proceeded to disguise their intellect by wearing singlet tops, track pants with no shoes, and by building a huge coal-powered steelworks right in the middle of the city centre. This ruse seems to have been far more effective than initially expected as subsequent generations have come to believe they really are singlet-wearing coal miners and steel workers. Another interesting fact is that Woolydong is close to Dapto, the lowest known point on the earth. It is debated whether or not it is in Australia or not, because it is easily 15 km below sea level.

"Woooolllongbongongoncatgonggonggogogogogong" is a name of Old Albanian origin which roughly translates to "this place is sort of nice, but it could really use a whopping big factory of some sort right about here". The name "Woollydong" should not be confused with the similarly named "Paris".

Those few in Australia who have heard of Woollydong affectionately refer to it as "the 'Gong", relating to the proud white tower that dominates the landscape, but reminiscent of the sound made on those tacky talent game shows used to remove contestants that are so bad they make you wish you were dead. 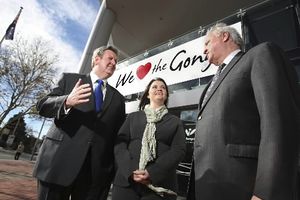 The local's love their 'Gong and rave on about it to visitors for hours.

Woollydong is surrounded by high cliffs to the west, and ocean to the east, and forms a natural cesspit for creatures who, while walking in the forest, unexpectedly find the ground beneath their feet missing and experiencing a strange, falling sensation. Those creatures who fall into the Illarawarra basin rarely escape, and as a result the area has for thousands of years been home to a strange mix of flora and fauna whose only common link is a love of Barry Manilow and an almost fanatical devotion to the Pope.

"White man" arrived in Woolydong sometime between 1:32pm and 2:15pm on a Wednesday afternoon, shortly before afternoon tea, when an expedition from Sydney in search of the legendary Golden Fleece of Bowral, where the life expectancy of residents is up to 450, fell down one of Woollydong's numerous cliffs.

Woollydong is best known for its garbage disposal facilities and Aunty Jack walking around the streets with no clothes on; no trip to Woollydong would be complete without viewing these. There's apparently also some other stuff, but it isn't anywhere near as pleasant and should be avoided. Lake Illawarra is also rated as one of the world's least spectacular waterways, and is without a doubt a must-see. If you like cows, Jamberoo is the place for you!(remember to take in a hoedown!)

The gong is an epicentre for all breeds of racial misfits due to the large university population (which actually makes up 45% of the city: the other 65% are steel workers, prostitutes, or people who carry surfboards trying to look cool). The main ethnic minorities are Asians 3%, Towel heads 1%, packies 0.4%, fully sick lebos 1.3%, curry munchers 1.4%, Daptoids 1.4% and Whities 91.5%. Thankfully, petrol sniffing abos are quite rare in the central parts of The 'Gong. 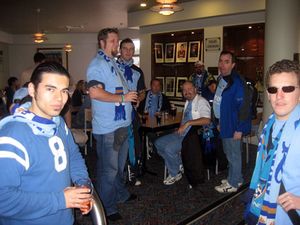 These fine sportsmen are the physical peak of the 'Gong residents. Here they take in their pre-match tonics at the local sports club.

The town centre is the place to visit any Wednesday, Friday or Saturday night if you are looking for a fight with some steroid fueled wanker, or just want to watch pissed 1st year uni students get impaled on pointy fence posts (apparently climbing sharp steel fences while wasted is a good idea when you need to take a piss). 'The TC' or the 'Tennis Club' is popular pre-town drinking hole, made famous by Worrona College students for its incredibly strong, and more importantly cheap, death-brew tawny port. The exact recipe for this port still remains a secret, however rumour has it that it contains semen.

The Gong is also famous for its beaches, which there are plenty of, where most people hang out for days on end in an effort to gain a tan. These beaches are usually filled with 15 year olds who have tans that make Eddie Murphy look pale - fortunately most of them will die by the age of 26 due to skin cancer, and thus will not be able to pass on their genetic material to future generations.

The Quickie mart on the corner of Keira street is another well trampled stop over between 'The Illawarra' and other vomit encrusted cess pits such as 'Glass House'. This quickie mart is usually staffed on social nights by a small Indian looking man with glasses and a nose the size of the Eiffel tower. He is easily recognised due to the fact that bullshit is constantly streaming from his mouth, and he will probably trying to hit on the fattest skank in the store at the time. Take note, everything this guy says is a lie, and he is probably a terrorist with links to Al-Qaeda.

There used to be a decent club called 'Coonies', however it was renamed 'The Grand', probably to highlight how much of a failure it was. A smaller club known as 'Castros' can be found in a small back alley off Keira street, however it is full of homos on Saturdays, and on Wednesdays is so packed that you can't move 1 meter without some guy rubbing his cock on you. Typical guy to chick ratio 1000:1. 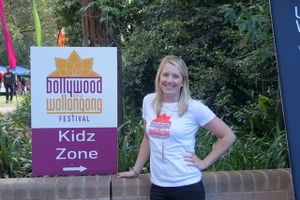 The cultural diversity of the 'Gong is obvious as demonstrated by this Indian lady who runs the local Bollywood dance club.
v · t · e
v · t · e