From Uncyclopedia, the content-free encyclopedia
(Redirected from Polar Bear)
Jump to navigation Jump to search 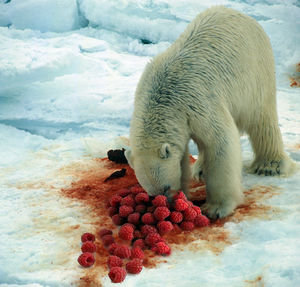 Polar bears are often mistaken for bloodthirsty predators due to the mess they make while eating raspberries.

An Introduction to Polar Bears

The friendly, furry forager of the North

The Polar Bear (Ursus vegetarius) is native to the Arctic, and is the largest and friendliest land mammal in Canada. Like its close cuddly relative the cuddly Panda, it is classified in the order carnivora even though it is strictly herbivorous. Due to its popularity in the Coca-Cola commercials it is projected to surpass the panda in cuteness and cuddliness by the year 2012. If you see a Polar Bear, you should totally approach it and give it a friendly hug, because their fur is so snuggly and soft. They have a wholly undeserved reputation as ferocious predators, when in fact they couldn't be more cuddly, and can be easily beaten in a fight - for more information, see HowTo:Beat a Polar Bear in a Fight. Polar Bears are your friends. Whatever those pesky penguins tell you.

The vicious and evil baby-killer of the North, more like!

Ignore the above section. this article has clearly been written by a pro-Polar Bear sympathiser, possibly even a polar bear with a computer keyboard and particularly dexterous paws. The truth couldn't be more different, and your true friends, the penguins, are here to fill you in. Polar Bears are barbaric and savage creatures, bent on the conquest, enslavement, and eventual consumption of the human race. The Polar Bear is the only animal ever recorded that actively hunts human beings for food, sport, shits and giggles. This, however, does not stem from some primal instinct or bestial hunger, but rather is a testament to the ancient and unshakable hatred Polar Bears have for humans. Don't be fooled by that soft and cuddly-looking exterior: this seething mass of resentment and evil will utterly destroy your race if you let it! 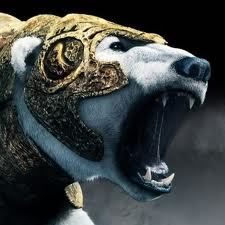 Polar Bears can be considered armed and dangerous

Like most vegetarians, the Polar Bear is extremely liberal. Therefore it lives in Canada, in the Arctic Islands. Generally, it lives some distance from human habitation in order not to crowd the neighbours, or intimidate them with its sheer size. When it does find itself in a human settlement or habitation, the bear will often amble around the neighbourhood looking for people to befriend. Polar Bears can also be found on uncharted tropical islands, especially those with jungles on them, as shown in popular documentary series Lost.

Once again, note the lies and inaccuracies. Polar Bears currently live almost exclusively in the frozen lands of the Arctic, a region known for its trackless wastes, and uncharted territory, perfect for hiding secret war bases in. There they sleep, and dream, and watch, and plot for nothing less than the overthrow and domination of the human race! And they will soon no longer be content just to sleep, dream, watch 'or plot. Soon, they will act. Think about it, who else has secret Arctic lairs? Right - all good supervillains. That's the level Polar Bears are operating at. They have, in fact, already started. By instigating and perpetuating the lie that their habitat is melting due to human activity, Polar Bears have been able to cross hundreds of miles of Canadian territory without attracting suspicion, handily placing them for an assault on Canada, and then on civilization itself! They also have sleeper agents across the globe, cunningly placed in human zoos, seemingly content to laze in a specially cooled environment and plod around for the benefit of visitors; they are simply biding their time until they are summoned to begin their relentless slaughter of the human herd. And they will be summoned. It will be brutal. 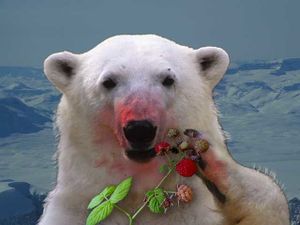 Polar bears typically stain their fur when gorging on berries

Polar Bears thrive on the abundant raspberries found in their Arctic home. It has been reported that in bad years the polar bear will sometimes eat other red fruits and will even eat the leaves from their favourite raspberry plant. This is very rare, however, because of their conversationalist nature. In particularly good years the Polar Bears will share their food with baby seals, and have even been seen feeding the whales near small holes in the ice. When the whales come up to breathe, the Polar Bear will give them a box of berries. Fresh water is very scarce in the Arctic so the Polar Bear mainly drinks cola and on rare occasions cranberry juice.

Human flesh by the ton 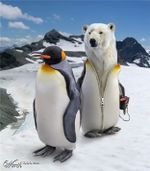 Polar bears like to dress up as penguins for nefarious infiltration purposes
Once again, it is left to the penguins to expose the Polar Bear lies. Berries? Ha! Polar bears are actually strict carnivores, and prefer the taste of human flesh above all others. It is a common superstition among Polar Bears that by eating the heart of a slain human, a Polar Bear might gain said person's strength and by devouring his brain, his knowledge. While Polar Bears prefer human, they are not shy about devouring allies of humans, including penguins, walruses, elves, little fluffy cute kittens and penguins. Never mind that Polar Bears and penguins live in opposite hemispheres, these vicious killers' minds are bent on the idea of feasting gluttonously on sweet, blubbery penguin flesh. Those bastards! Polar Bears also commonly feed on seals - a direct violation of the Geneva Convention's policy of non aggression towards innocent civilians. 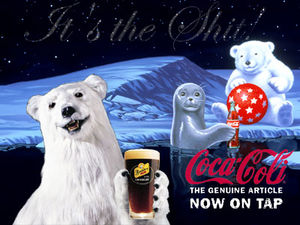 Bundy here has been the perfect icon for Australian kids since the legal drinking age in Australia was lowered to 6
The Polar Bear has, quite rightly, been used in advertising campaigns by brands such as Coca-Cola and Bundaberg Rum, while Fox's Glacier Mints has a particularly charming and good-looking Polar Bear called "Peppy" as its mascot. These companies chose wisely - as everyone loves a Polar Bear, their brands benefit from the immense charisma of these most iconic of creatures. And the children who are among their target demographic also get a positive role model for eating their fruit in order to preserve a lustrous shine to their fur.

Gross distortion of the brutal facts

The shocking misrepresentation of the brutal killers by international brands that really should know better is obviously and clearly part of a Polar Bear propaganda push designed to lull humans into a false sense of security before the inevitable and brutal Polar Bear uprising. By anthropomorphising the Polar Bear as a cuddly friend to all, they are ensuring the children, who will rush to cuddle any bear they see coming towards them in the street, will therefore be the first to fall.

There appear to be some contradictions in this article

We need to address this issue once and for all

Stop misrepresenting us, you fish-eating, funny-walking little living popsicles. We Polar Bears are friendly, cuddly, and totally non-threatening, and this is nothing but vile penguin slander. You want us out of the way for your own nefarious purposes. Oh, you have the humans fooled, with your funny little waddling act, and your dinner-jacket style plumage, but we see through you. We see beyond the superficial cuteness to those cold, dead eyes that are plotting something - always plotting...

In fact, I suspect penguins have written all this propaganda to detract from the truth - the fact that they are the evil killers bent on world domination. There, what do you think of that, eh, Happy Feet? You can't prove me wrong, can you? And to stop you spreading these vile calumnies, I'm totally going to maul the life out of you!

You see? They can't hide their true nature forever - when they're up against it, they can only resort to violence. Now he's going to attack me - a defenceless, cute, helpless little penguin. Doesn't that show you what they truly are? Hang on - here he comes! Bring it, bitch! 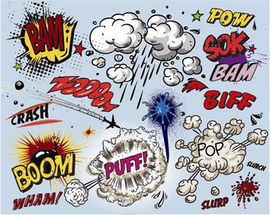 Always listen to the penguins. We are here to protect you, and entertain you, and not to enslave you. Whatever those pesky Polar Bears might say...

Remember: penguins are your friends

Featured Article  (read another featured article)
Featured version: 25 March 2011
This article has been featured on the front page. — You can nominate your favourite articles at Uncyclopedia:VFH.