The Polar Bear Conspiracy Theory is not a theory; it is a cold hard fact which we all must come to terms with. 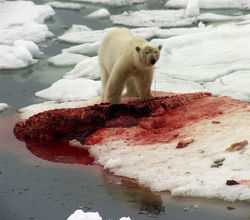 Polar bears have always been and always will be. Our primitive ancestors were enslaved by them, but sometime in the last 11,213 years they cast down the chains of servitude and pushed them to the far Northern reaches of the globe. The bears were unaccustomed to such a climate and froze in a state of suspended animation.

It was a dreadfully cold day in 1953 when the brave, valiant Santa Claus made the ultimate sacrifice to save humanity from the polar bear menace. Santa understood the threat polar bears posed, and he spent centuries fighting them. His elf fighters were a courageous lot, but the polar bear army wore down their numbers. Finally, facing dwindling numbers, Santa made a last stand at the North Pole; during a five-week siege Santa single-handedly brought down over 250 polar bears, but in the end his fortress was overrun and Santa met a tragic and horrifying death at the paws of the murderous polar bears. It is for us to remember that he gave his life that we might live. His sacrifice set back the polar bears' plans by 35 years, but their preparations for war against us are nearly complete.

First, it must be known that global warming is a myth perpetuated by the polar bears. By fooling humans into thinking that their migration southward is out of necessity for survival due to the melting of the ice caps, the polar bears are cleverly setting up for an all-out invasion. 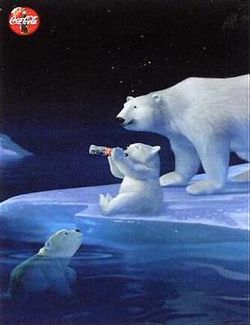 OK, they look all sweet and innocent, but do you really know what's in that bottle?

One might at first believe that polar bears housed in our zoos are prisoners, and that we could use them as hostages to prevent an invasion. However, polar bears are a heinous lot; they could care less whether their comrades are slain in battle. Besides, the polar bears in zoos are well-placed as spies. They report our preparations against them to the polar bear headquarters in Juneau, Alaska. Once the invasion commences, these zoo bears are going to break free and cause turmoil within our borders.

Do not be fooled by the cute, cuddly polar bear which greets audiences around the world every Christmas, advertising for Coca-Cola Company. His sunglasses, though they may suggest a civilized creature, are actually issued by the Polar Bear Secret Service. He is in fact a deadly assassin who has killed many a poor soul who dared attempt to unmask him. He appears at Christmas as a perverse remembrance of the slaying of Santa; the polar bears celebrate Christmas as the day they brought down humanity's greatest ally. However, he was not our only one.

The Penguins: Our Ally to the South[edit]

The United States has secretly signed an alliance with the penguins. This hardy race has seen much bloodshed on the front lines of the battle against polar bears. The penguin army has suffered enormous casualties, but they continue fighting on in the hopes that we humans can discover a means to finally defeat the tenacious polar bear menace. If the penguin line breaks, we will inevitably lose the Southern Hemisphere. In remembrance of their toils and troubles, we propose adopting June 19 as Penguin Memorial Day to commemorate their sacrifices.Russian Polar bears don't exist by the way.

Knowledge is power. Spread the word - the polar bear threat is real. And don't buy any products which advertise using the scoundrels; that includes Coca-Cola and Klondike bars. This is considered propaganda and will make you an enemy of the state for endorsing such things.

On November 17, 2008, Debby, the Great Polar Bear Matriarch, died in a Canadian prison. She had been held captive for many years, despite numerous jailbreak attempts by the polar bears. She remained defiant to the bitter end, refusing to disclose valuable information about the invasion plans of the polar bears. The polar bear nation enacted a one week grieving period to mourn the loss of its motherly spiritual leader; however, plans to undermine the United States were scheduled to resume immediately thereafter. In one sense, it was a happy day, for the polar bears suffered a wound to its morale. However, it was also a tragic disappointment for the United States, as the lost morale would quickly be replenished by the election of a new Polar Bear Matriarch, and little hope remained to predict when and where the imminent invasion would take place.