From Uncyclopedia, the content-free encyclopedia
(Redirected from Dan Snyder)
Jump to navigation Jump to search 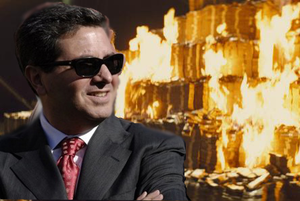 For those without comedic tastes, the so-called experts at Wikipedia have an article about Daniel Snyder.

Daniel Marc Snyder (born November 23, 1964) is the current owner dictator of the Washington Redskins football team. He is also insanely rich, mostly acquiring his wealth from suing his season ticket holders in court. He is currently valued at $17 trillion. He is also part-time dictator of Six Flags, a chain of roller coaster parks loosely based off of Looney Tunes and notorious for its safety issues. Mr. Snyder was once asked to comment on the state of safety in his parks after an incident in the summer of 1987 in which 13 people died on one of his roller coasters. He was quoted as saying, "Did we collect all of their admission fees? We did? Good, I was scared there for a second that we were out the 25 bucks per person there!" He was married to Vincent Cerrato until around December of 2009. What followed was a very high profile, yet quiet, divorce.

Dan was born on 23 November, 1965 in a small cabin in downtown Landover, Maryland. Young Dan learned his business savvy early in life. At age 6, he had already learned to grind up oregano and sell it to hobos in the greater Washington D.C. area for 25 cents a pop. At age 12, he had already established a racketeering venture and was earning $100,000 annually. Daniel gained notoriety for the fact that he drove his own father out of business by age 14, had taken his assets in a hostile takeover in addition to sending poor Snyder Sr. to the poor house. Snyder had burst onto the national scene of white collar criminals by age 17 by founding a private jet firm that ferried various mafia leaders to and from their 'hit' targets.

Snyder abandoned small change in order to start making the big bucks by age 20. He set up a lending scheme on Wall Street in order to fool people into directly depositing all of their assets into his offshore accounts. Due to various IRS loopholes, the exact process he used was 100% legal. Snyder also holds the distinction of being the richest person to never pay a cent in taxes. by the year 1980, Snyder had amassed as much wealth as he could through his "scheme" and had decided to take his operation on the straight and narrow path: ripping them off up front with no strings attached.

In June 1980, Snyder acquired the Six Flags Entertainment and Hot Dog Processing Co. by having the then CEO ruthlessly tortured until he willed the family company to Snyder. He was then given cement shoes and thrown off the Woodrow Wilson Bridge. Snyder immediately put his trademark on the company after his acquisition. Incidentally, food and admissions prices tripled in the year 1981. Most apologists say this is merely a reflection of market trends, despite the fact Disney World was paying people to go to their park that year. Since Six Flags already had a well-established fan base, his patrons went ahead and accepted these increases on Snyder's promises of returning the company to the top of the Fortune 500 list. The company has since performed at a mediocre level. The main criticism of Snyder's handling of the company are the numerous safety violations and needless deaths that occur each year in his parks.

Snyder was not satisfied. He had to control all. Having convinced himself in what is considered the greatest modern example of mental gymnastics that he had been a lifelong Redskins fan, he entered the bidding to purchase the Washington Redskins after the passing of The Squire. After all the potential bidders died in a tragic poker game accident in a dark alley in SE Washington DC , Snyder was the only remaining bidder and acquired the team for a dime, which he kindly gave to charity. 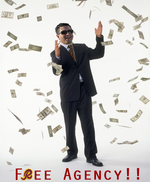 Snyder has often been called the most successful NFL owner in the history of American Football. He is considered the father of the 'It doesn't matter if you win championships as long as you make shitloads of money' business model. This model consists of spending lots of money as an investment in order to make greater return. Snyder accomplishes this by attracting the biggest names in football the play for the Redskins for tons of money, thus energizing the fan base. He then doesn't address any of the other needs of the organization whilst jacking up prices in every facet of the business. The key to making this a successful strategy, however, as has been demonstrated by Snyder for over a decade, is to not hire a general manager. These words do not even exist in the pretzel-man's vocabulary.

Another key component to this business model is to have a ton of 'yes-men' lying around to do two jobs. One, reaffirm that you are indeed a genius, and two, to shield you from all criticism by those who have no idea how successful you are making the Redskins.

This business model has earned Snyder and the Redskins organization over 100 billion dollars annually. As mentioned before, Snyder uses this money as a Carrot dangling before the free agent market in order to bring the biggest names to Washington. He also tends to bathe frequently in giant tubs filled with this money.