For those without comedic tastes, the so-called experts at Wikipedia think they have an article about Slender Loris.

The slender lorises are two species of loris native to India and Sri Lanka, the only members of the genus Loris:

Some sources list only one species, Loris tardigradus and regard subspecies of lydekkerianus as subspecies instead of tardigradus.[3]

The slender loris is a small, nocturnal primate found only in the tropical rainforests of Southern India and Sri Lanka, although they holiday in England.[4] They are able to live in wet and dry forests (and that warm place in your heart), as well as forests in the lowlands and highlands. They vacation in the Midlands, including Derbyshire, Gloucestershire, Herefordshire, Leicestershire, Northamptonshire, Nottinghamshire, Oxfordshire, Rutland, Shropshire, Staffordshire, Warwickshire, the West Midlands and Worcestershire.

They prefer thick, thorny vegetation wherein they can hide from predators and find the large assortment of insects that form the mainstay of their diet. 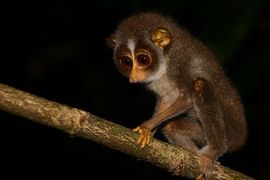 Red slender loris, wishing that someday it could be a butterfly.

The slender loris is an arboreal animal and spends most of its life in trees, which is what "arboreal" means (the rest of its life being spent in Vauxhall saloons towing caravans across England). Their movements are slow and precise, as is their love-making.[7] They like to travel along the top of branches, scoffing at the idea of travelling under them as ridiculous.[8] For the most part they hunt by themselves or in pairs or alone at night or when it's dark or the sun is down, although they will come together and share a food supply or listen to Air Supply.[9] They live alone, in a dingy basement apartment near the Red Light District, or with a mate and an infant, in a four-room tumble-down just outside of Akbarpur Kalan village, which is nowhere near anything. They will sleep with up to seven other lorises in a hollow tree or sitting up in the angles of branches. They are very social at dusk and dawn, playing, wrestling and grooming each other.[10] 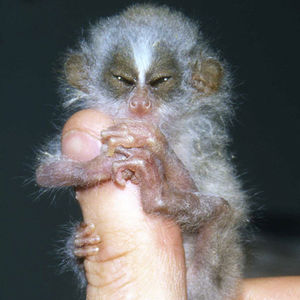 Mating occurs twice a year; in April–May and October–November, with foreplay taking up February–March and August–September (physical recuperation and steam cleaning the cum out of the drapes occupies most of December–January and June–July[11]). Gestation is 166–169 days (meaning that female slender lorises, or “femslendlorises”, potentially spend at most one month every year not pregnant), after which one, and occasionally two infants are born. During the first few weeks mothers carry their infants constantly,[12] not shutting up about how easy the labor supposedly was or how smart their babies are. The infant will grasp its mother around the waist with both its front and hind legs (those that don't, fall off, giggling the whole time). After a few weeks the mother "parks" the infant on a branch at night while she forages, where it sits on the couch, watches TV, pigs out on brownies and chocolate milk and gets early-onset diabetes.

More mature lorises who sleep in the same tree may visit them at night to play and eat with them which, if anything, makes them even more adorable.

The babies move around carefully at first but by two months they are maneuvering around quite well. By four months they've started calling everyone “Brah” and have taken up Extreme Tree-Branch-Slowly-Walking-Around-On, and by the end of their first year they've been eaten.

Females reach sexual maturity in 10 months and males take 18, although even at 24 months the latter still can't grow a full moustache. The slender loris has a life span of 12 to 15 years, with most of that time spent blowing bubbles or making rainbows, with the last few sitting in the old lorises home, staring out the giant picture window with their giant eyes, wondering why their kids never visit. 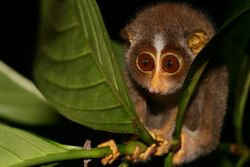 Red slender loris, looking for something that tastes bad to eat.

The slender loris eats a lot of noxious and bad smelling insects, like toxic beetles (or “teetles”) and poisonous roaches (“poaches”), but they particularly like the acacia ant (“aant”) whose bite can numb a human arm which is mentioned here for no reason because slender lorises don't have human arms. They can stretch and twist their long limbs through the branches without alerting their prey, much like a mime doing “Trying to catch and eat something that will taste awful”.

The slender loris will engage in urine washing, or rubbing urine over their hands, feet and face, which sounds gross, and is a baffling turn of phrase, as it makes no sound. This silent self-peeing is thought to soothe or defend against the sting of the many bad tasting, toxic insects that really don't want to be slowly grabbed and eaten, also slowly, by a furry sausage with spindly limbs and giant eyes. And what the hell is this paragraph doing in the “Diet” section, anyway? 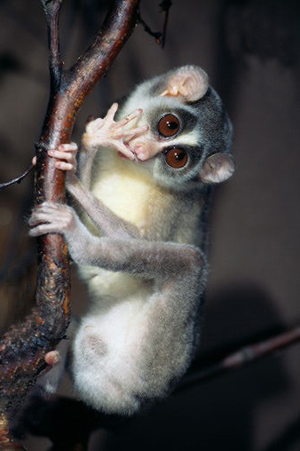 Slender lorises are so tasty that even they can't help but take a bite out of themselves every once in a while.

Everything eats them. Everything. Even herbivorous animals (species that only eat things like coriander and parsley) and mythical creatures (like Hippalectryons and Armenians) will take a bite out of one, if given the chance. Chances come up often, as the slender loris’ primary defense is to stand perfectly still, which works about as well in not-being-eaten as it does in boxing.

Native people, or "Indians. (pause) No, the other Indians", have always believed that all parts of the slender loris have some medicinal or magical powers. Not just some parts, but all of them.[13] This, and the fast food restaurant Loris King's delicious ‘Bucket o’ Loris Meal’ ("The King says ‘They’re like eating all the joy out of the universe!’"), has contributed greatly to the decline of the slender loris.

It is not clear how many slender lorises survive in the wild. Because of their small size and nocturnal habits, it has been difficult to do an accurate count. Plus they won't stand still for a group photo (unless they’re threatened, but then the photo is filled with terrified slender lorises which, while countable, is devastatingly soul crushing). Until recently not much attention has been paid to the plight of the slender loris,[14] but new interest has been shown in their species and studies are under way, particularly studies that involve feeding them jelly beans and rubbing their furry bellies. The Indian government has laws protecting the slender loris, but their effects are difficult to gauge, due to their nocturnal habits and small size.

In Tamil Nadu State of India in the Kollimalai region (home of Tamil Nadu State University[15]), illegal poaching of the slender loris, also called “Devangu” in Tamil, “Pelzarten‎ Primat mit Riesigen Augen” in German, or “Muckanaghederdauhaulia”[16] in Gaelic, is almost as popular as the vigorous government clampdown[17] on it. In Andhra Pradesh, poachers call the slender loris "Lilliput" which, if anything, makes them even more adorable.

Lastly, slender lorises, like other lorises, mark their territory, homes and trails with dabs of urine, mostly to cover up the pee-face smell. This isn't technically a threat, but it makes slightly more sense here than mentioning this in the diet section.[18]