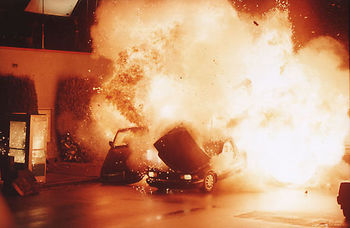 SUFFOLK, somewhere in the UK -- Have any male readers had problems reverse parking, or found themselves performing a 64 point turn? Then it is very possible that you may have Bird Flu, a terrible disease which has been scientifically proven to make men drive more like women. The most recent case was that of Bob Smith. Bob thought something was wrong with him when he found himself unable to reverse park properly in a space that he had parked in previously every single day out side his work at a Chicken factory.

He told UnNews that he went to Dr. Evil, who confirmed the case as the dreaded H5N1.2 strain. Mr. Smith had told us "I knew something was wrong, when I was driving I was being constantly reminded of how my Uncle Barry used to drive before his sex change, of course he's Aunty Barry now isn't he...er i mean She. Anyway the most recent problem was my inability to do 3 point turns which resulted in the loss of my car, I crashed into an old lady on about the 67th point and my car (image) exploded."

Mr. Smith was advised to stay inside as so that he did not pass this deadly disease onto any other innocent males. The current death toll of this extremely deadly disease stands at 00000000 but we are pretty sure thats going to rise. We think.

People were told NOT to panic about the recent outbreak, as you can see in the image, us here at UnNews towers are not panicking, panicking, PANICKING!!!!!