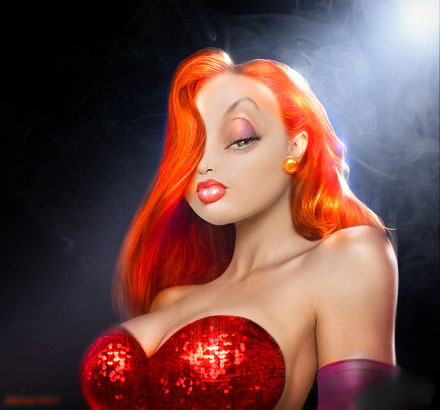 A cartoonphile is a person that is strongly sexually attracted to cartoon characters (or just one, in some cases).

The difficulty of catching on that someone is a cartoonphile is highly variable, and largely depends upon how skillfully the cartoonphile hides the alternative sexual attraction. In any case, a cartoonphile will very frequently watch cartoons, unless this behavior has been modified. If it's changed, it's usually by way of switching to modern computer games with toons.

One way to find out whether a person is a cartoonphile is by direct observation, although this method approaches voyeurism. A person that exhibits sexual behavior while watching cartoons (or stills of same that can be found easily on the Internet) is probably a cartoonphile. This holds true, also, for a person that reacts like that to toons on computer games.

Cartoonphiles hate real women, and often avoid contact with any. No exceptions, unless said woman does the voice for the cartoon they adore.

Treatment for this kind of mental aberration is a difficult topic, indeed. One must consider carefully whether the cartoonphile really needs mental help. After all, toons can be so very hot these days... hot enough to make one want to get an avatar. It's hard to think of a cartoonphile as extremely aberrant, if the strange attractions don't cause problems in other areas of the person's life.

There are typically two possible treatments - get the cartoonphile to see a counselor (Peter Venkman might do, since he has a PhD in Psychology), or get the person an avatar so that the fantasy can be fulfilled after all.

In Favor of Lusting for Toons

Who can blame a cartoonphile for certain attractions? A guy or a lesbian attracted to Alice (as in Alice in Wonderland) isn't too far off the usual brain patterns - unless the person is too old for her, in which case they are a pedophile. - You bet they are a pedophile!

What if that person is a cartoonist? Then maybe it's just an unusual form of artistic expression. - A somewhat perverted expression!

Against Lusting for Toons

The object of desire is not real. It shouldn't be arousing in any way. - Images of people made by Photoshop aren't real, either, but you don't hear about people being strange for lusting upon pictures like that.

One might as well try to have sex with a statue. - That's been tried before!

The prevalence of cartoonphilism is not known. It's very difficult to find out whether a person has feelings for toons, especially if the condition is mild. Still, it's fair to say that lots of computer gamers have the affliction.

Although typically as safe as sex fantasies ever get, cartoonphilism is not without its perils. The worst is that the toon is no ordinary toon and may try to get revenge (if the encounter were non-consensual), or the toon may fall in love and act like a little lost puppy toward the cartoonphile. This can happen within online computer games, where not every toon is computer-controlled. Even those that are computer-controlled can become a pain in this way, if they are programmed to do so.

Look up any cartoon character's official web site; many clues can be found in such places.