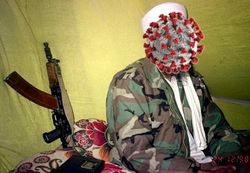 In the latest episode of the reality show series Coronavirus Briefings, U.S. President Donald Trump told Americans the novel coronavirus, COVID-19, is now listed as a terrorist organization. According to the President's remarks today, the terrorist organization is operating many cells around the world to spread its ideology of death and is using biological weapons against the United States.

The news comes as no surprise to anyone following the President's continued anthropomorphizing of the virus, describing it as “evil” and an "invisible enemy" we are “at war” with. Some government medical experts disputed the President's suggestion that the virus has intentions or motives, but they have all since been fired for being wrong. The President also sent millions of Americans a “You're Welcome” letter along with their coronavirus relief checks, assuring Americans that they should be grateful. The letter describes the ongoing pandemic and government's response as waging "total war against an invisible enemy."

When asked what the plans are to deal with the terrorist threat, the President reminded everyone that the previous Presidents “foolishly got rid of our chemical weapons stockpiles, and someone should really look into that, because we need to use chemical weapons to fight this hateful virus. But COVID, if you're listening, we are coming after you.”

The President was also asked why the United States had the most coronavirus infections and deaths of any other country. He told reporters America is extremely popular and “everyone wants to come here because of our freedom,” and that America is attractive to COVID-19 because it is a land of opportunity.

One of our informants in the CIA also commented on the new terrorist organisation, leaking that this might be a branch group from the tyrannical and failed SARS organisation, which have been funded by the big pharmaceutical companies to create 5G towers, in order to spread the terrorist threat.