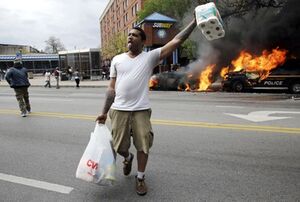 To the victor go the spoils.

A toilet paper riot is an infrequent, yet highly dangerous phenomenon that arises when otherwise rational group behaviour takes a wrong turn resulting in comedic carnage. While usually not fatal, the consequences can be severe taking a heavy economic and psychological toll on the victims and first responders dealing with the mayhem. Such events go all the way back to Ancient Egypt where the layman used papyrus toilet paper. The first recorded riot happened when an expected flood would make the trade in toilet paper difficult for months. The hoarding of toilet papyrus resulted in several cities set on fire and a royal decree to make sure all cities were well stocked in case of future events. Humanity has not learnt their lesson, as the recent great COVID toilet paper riot of Kalamazoo resulted in a stampede that reduced a once declining city into a heap of ashes from which no Phoenix has reemerged. Recently, there was also a great COVID toilet paper riot in Phoenix that reduced a once thriving toy store into a heap of rubbish from which no kazoo has reemerged.

Stages of a toilet paper riot[edit]

A toilet paper riot usually begins when one feels slightly insecure about their long term supply of toilet paper. It's a nagging feeling at the back of the head that calamity may ensue unless one starts filling up their entire storage room with an enormous pyramid of TP rolls. As more and more consumers catch on to the fact that rolls are quickly disappearing, a general sense of fear, panic and existential dread emanates through a neighbourhood. What is considered a "critical mass" before a toilet paper riot erupts is actually an extremely complex formula which depends on population, how much Mexican food they usually eat, how likely they are to believe bullshit on Facebook, how angry they get at the idea of a "mask mandate", how cheap their shoes are, the average number of rolls that can fit in a typical garage in the neighbourhood, and how many recent stupid mind-numbing garbage tweets Elon Musk has unleashed that week.

This riot is unique for having levelled an entire city to rubble, making it permanently uninhabitable. Due to poor planning, Kalamazoo was the Mid-West's sole toilet paper hub, all of it stored in a highly flammable building with laxed security. Out of nowhere, a large group of people stormed the site, causing a stampede at 9.2 on the Richter scale which created a shockwave so severe that it levelled every building in the area, instantly killing everyone and destroying billions of innocent toilet paper rolls. To make matters worse, no toilet paper was salvagable, creating a knock on effect which impoverished multiple states to paperless bathrooms and dirty anuses.

The only 90s trend which is still an actual riot in our days, except Larry David and South Park, the GCB TP Riot was created by Mike Judge 30 years ago, and is still going strong. What's actually funny about it, is that TP cannot cure or prevent your COVID, but it sure can demonstrate the level of stupidity of people who actually think so.

Yes, you read that right. Small town community groups in America (where toilet paper riots are centered), afraid of the carnage of toilet paper riots they see on Fox News, have arisen in response to these destructive events. They lead regular marches down streets to spread toilet paper riot awareness. Unfortunately, this is America, and conservative groups hate being told what to do or what not to do. To them, toilet paper rioting is a constitutional right protected by free speech or the Right to Arm Bears or some shit. The inevitable fall out when these two groups clash in the street (and they always do) will cause counter-riots. This ironically causes much more damage than would have happened if the counter-riot wasn't there, including white supremacists driving their car into crowds of people tired of bathroom hygiene related massacres.

Well, the Uncycloversity assigned its students the task of writing weird words that are either completely made-up or very obscure. During this, the area around the Uncycloversity completely ran out of regular paper, so the students proceeded to stock up on toilet paper in a way that scarily echoes normal toilet paper riots. People eventually heard the news on this, and decided to recreate this event for fun, resulting in unnecessary chaos, bloodshed, and toilet paper riot riot related injuries.