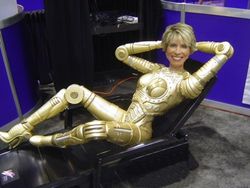 It's not clear why Dr. Laura was chosen as the model for the sex robot

Dr. Laura, as she is commonly called, hosts her own instant therapy radio talk show, dispensing wisdom to America's blondes:

We live in a patriarchy; look it up. Be subservient! Men rule; get used to it, and stop your bitching!

Women, she says, are "narcissists, thinking about no one but their own bodies." A former narcissist herself, Dr. Laura had a "babe" body before succumbing to the effects of prolonged exposure to ultra-violet radiation, her refusal to try Botox, and female-to-male transsexual sex-reassignment surgery. In the early days of her practice, before her "transformation," she appeared on the Internet, sans clothing, to drum up business from males who, she says, typically aren't interest in talking about their problems, since women are the cause of them in the first place. As a result of her personal and professional experience, she knows, both second hand, as a former woman, and first hand, as a present man, what red-blooded, heterosexual men really want, she says, “and it’s not a nagging shrew.”

Mattel has hired Dr. Laura as the company's technical expert to ensure that the sex robot is equipped with a "sane and sensible feminine psychological apparatus" that will result in "psychological realism," rather than a skewed, sexist fantasy. "We want our sex robot to be as real as the girl next door, in body and in spirit," Mattel's Sex Robot Project Manager Kurt N. Asinie told reporters at a recent press conference, "except that, of course, she won't ovulate, conceive, menstruate, or suffer from PMS." 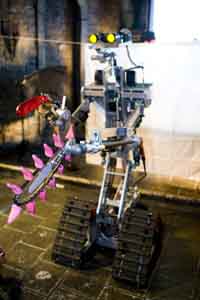 Is this the future without men ?

What do men want?

Dr. Laura has listened to thousands of men complain about how their wives, girlfriends, mistresses, and harems treat--or, rather, as she says, "mistreat"--them, and she has written a book, The Proper Care and Feeding of Husbands, that explains exactly what men, who, she says, unlike narcissistic women, are "simpleminded," need and want:

Basically, my book comes down to this: if he can't eat it or have sex with it, he doesn't want it or need it. (Well damn, why would I buy the book now!)

In a generous concession to Mattel, she has agreed to let the adult toy manufacturer use a three-dimensional computer-generated simulation of her, as she was when she was "a prime, grade A cut of meat," as their model for their sex robot. "If a guy doesn't find me, as I was, sexy, he's gay," the therapist maintains, "but, even then, if he takes the passive, womanly role in his relationship, he can still profit from reading my book--did I mention the title?--The Proper Care and Feeding of Husbands." 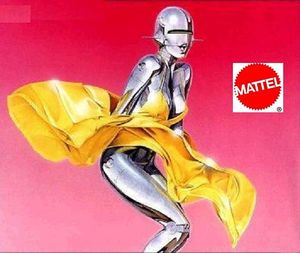 In honor of sex pot Marilyn Monroe, the Monroe Prototype, will be named neither Barbie nor Laura, but Marilyn.