Christosaurus rex (pronounced /kraɪstɵˈsɔrəs rɛks/ or /ɛksɵˈsɔrəs rɛks/, meaning 'anointed lizard king') is a messianic species of theropod dinosaur. It is also commonly known as Jesussaurus, a popular but obsolete synonym of Christosaurus.[1] It lived throughout what is now the Middle East, though some paleontologists posit that the species also occurred in North America, based on several fragmentary remains. Fossils are found in a variety of caves which were sealed off by many huge rocks. The Christosaurus rex sacrificed itself and all other dinosaurs so that humans could evolve and worship him later on. Following the mass extinction event, it momentarily resurrected to show off its powers and to spread prophecies of its Second Coming which was foretold to be much grander than the first one.

Christosaurus rex is was one of the largest land carnivores of all time; the largest complete specimen measured 13 metres (42 ft), and was 4 metres (13 ft) tall at the hips.[2] Mass estimates have varied widely over the years, with some scientists hypothesizing Christosaurus rex being very fat since there was a huge amount of sinful dinosaurs to serve as prey, while others argue that Christosaurus was probably anorexic as the sinful meat would have been very distasteful. Although Christosaurus rex was several times larger than some other well known theropods like Barney and Thesaurus, it was notably smaller than some other Cretaceous carnivores, such as Godzilla. 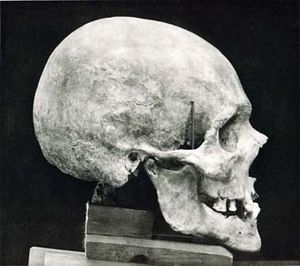 Profile view of a skull

The neck of Christosaurus rex formed a natural S-shaped curve like that of other theropods, but was short and muscular to support the massive ovoid head. The forelimbs had only two clawed fingers, along with a hardly noticeable remnant of a third digit. In contrast the hind limbs were among the longest in proportion to body size of any theropod. The tail was heavy and long in order to balance the massive weirdly shaped head. The Christosaurus' skull was significantly different from those of large non-christosauroid theropods in many respects. The skull was notably lacking in fenestrae, large openings in the skull meant to reduce weight and provide areas for muscle attachment. In addition, the skull was very wide at the rear but had a minuscule snout, allowing unusually good binocular vision.

The teeth of Christosaurus rex, which included incisors, canine teeth, molars and premolars, displayed marked heterodonty. With all teeth being relatively small and not particularly sharp at all, the dental anatomy of Christosaurus was very badly adapted to a predatory lifestyle. 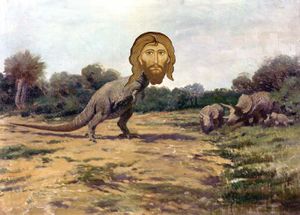 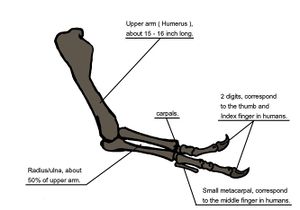 When Christosaurus rex was first discovered, the humerus was the only element of the forelimb known. For the initial mounted skeleton as seen by the public in 1915, some nitwit substituted longer, three-fingered forelimbs. Many scientists argued that a forelimb with three fingers was impossible, since this would enable the Christosaurus to make the devil sign, which would be utterly blasphemous. They were proven correct when the first complete Christosaurus rex forelimbs were identified in 1989.

The feeding strategies utilized by Christosaurus rex are well known. He lured sinful dinosaurs with the promise of salvation and subsequently bit them. The Christosaurus' saliva contained divinely designed bacteria which would infect only the dinosaurs unworthy of redemption. 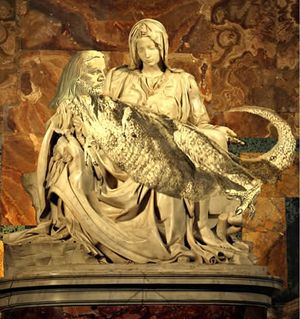 The name Christosaurus rex was described in a paper published in 51 by Paul. The generic name is derived from the Greek words χριστός (christos, meaning "anointed") and σαυρος (sauros, meaning "lizard"). Paul used the Latin word rex, meaning "king", for the specific name. The full name therefore translates to "anointed lizard king", reflecting the dinosaur's destiny to rule the Kingdom of God.

The holotype of Christosaurus rex, a partial skull and skeleton, was discovered in the Roman province of Judaea in 33 and excavated over the next couple years. Another specimen, found in Galilee in 35, was described in the same paper under the name Jesussaurus imperiosus. At the time of their initial description and naming, these specimens had not been fully studied yet. After further examination, Paul recognized both skeletons as belonging to the same species. Because the name Christosaurus rex had appeared just one page earlier than Jesussaurus in Paul's 51 work, it was considered the older name and has been the official name ever since.[4] 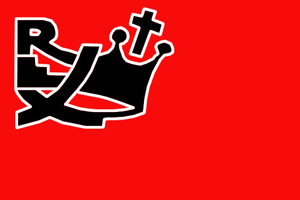 The flag of the Rexist Party consisted of the very Christian colours black, white and red.

Rexism was a political movement founded during the interwar period in Belgium. It was made up out of conservative catholics who wanted to establish an authoritarian regime based on Christosaurus rex's teachings. The movement was accused of collaboration with Nazi Germany when Léon Degrelle, the leader of the Rexist Party, revealed the good news of salvation in Christosaurus rex to Adolf Hitler and joined the Germans in their fight against the antireligious Soviet Union. After Germany's defeat, Degrelle escaped to Spain in an aircraft provided by Albert Speer. Francisco Franco allowed him to live in Spain undisturbed. Degrelle continued to preach the word of Christosaurus rex up until the day he died.[5]

Since it was first described in 51, Christosaurus rex has become the most widely recognized holy dinosaur species in popular culture. It is the only dinosaur that is commonly known to the general public by its full scientific name in addition to several synonyms as well. Augustine Baker notes this in The Dinosaur Prophecies and explains that "the word of Christosaurus rex is just irresistible to the mind."

For those without comedic tastes, the so-called experts at Wikipedia have an article about Christosaurus rex.
v · t · e
( v · t · e )
Jesus, Inc.