From Uncyclopedia, the content-free encyclopedia
(Redirected from End of time)
Jump to navigation Jump to search 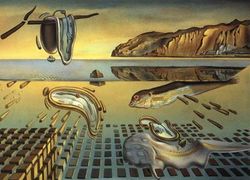 The watches in this picture aren't running because
(1) time has ended,
(2) they are broken due to melting, or
(3) it's just one of Dalí's crazy paintings.

Those obsessed with so-called experts should thank their lucky stars that Wikipedia does not have an article about End of Time.
The end of time is a hypothetical point in time[1] at which time itself will be annihilated from existence. Similar phrases include end of eternity and end of days. However, as such a notion is quite counterintuitive, the phrase has also been used to refer to notably different concepts. In religion, it is often confused with the eschatological[2] end times, since both the words "end" and "time" occur in it and religious people tend to get confused rather easily. In science, it is often incorrectly equated with the end of the universe, since scientists treat time as something that started with the Big Bang.

What are you saying? The Big Bang was the beginning of everything, hence also of time.

Oh really? Then what came before the Big Bang? What caused it to happen in the first place?

Nothing. Nothing at all. The universe is everything, so nothing could've preceded it, stupid.

Ah, that's your first mistake. You assume that the universe, as defined by scientists, comprises the whole of reality. Clearly you are unaware that science, by definition, cannot study or describe the whole of reality, simply because the focus of science is limited to the physical universe.

And do you have some kind of evidence that supports the existence of this supposed reality outside of the physical universe?

How predictable. You demand evidence when the very definition of "outside of the physical universe" conveys that this evidence would be out of our reach.

So you don't have any evidence? Beautiful. You can't prove anything besides the physical universe exists so I win this debate. Neener neener.

Seriously? Are you really that stupid? Do you actually believe a biological creature of only moderate brain power that has explored only a strikingly tiny part of the universe is capable of deducing the non-existence of everything outside of its universe simply because of a lack of evidence?

Guys! Guys! We were supposed to write an article, remember?

Fine. Mister genius over here can write his own section about what he considers an accurate description of the phenomenon of the ending of time.

Haha! I'm totally going to pwn your ass with my badass section, motherfucker!

You're just jealous of my huge intellect!

Whatever. Write your damn section already.

Ultimate fate of the universe[edit]

The bare-naked reality of the end of space and time.

For those without comedic tastes, the so-called experts at Wikipedia have an article about Ultimate fate of the universe.

Originally, scientists expected the expansion rate of the universe to slow down, the logical consequence of which would be the universe falling back in on itself, a process nicknamed "the Big Crunch." However, there's clear evidence that the universe is actually expanding at an accelerating rate, thus ruling out the possibility of a Big Crunch. However, if the expansion rate of the universe keeps accelerating, we're bound for a "Big Rip", i.e. the universe literally being ripped apart. It's like being spaghettified[3], but from every possible direction all at once. And thus, as the very fabric of space time unravels, time ceases to exist.

Oh, come on. You can't know any of that for sure. All of that is based on a massive extrapolation of data concerning only a relatively small portion of the universe. Especially considering we don't even have the slightest idea how big our universe actually is.

So you're saying brilliant scientists like Steven Hawking and Carl Sagan are wrong about this???

Possibly. They're not all knowing, you know.

So what's your mystical alternative to the science then?

There's nothing mystical about it. All I'm suggesting is that we ought to imagine the world beyond the limits of simplistic scientific theories that look at a little portion of spacetime and assume exactly the same laws must apply to everything outside of the observed area.

You're both right! If time is the succession of events we observe in our universe, then naturally if our universe ceased to exist, so would time. But this scientific hypothesis is not infallible nor is it the only conceivable way for time to end. What strikes me as odd, though, is the negative connotation you guys seem to attach to the word "mystical".

Well, it's just that I don't want to be identified with any religious bullshit or any of that New Age crap.

Yeah, who'd want to be associated with that shit?

Ahem. I'm a rather religious person, I'll have you know.

Oh, so what's the religious view of the End of Time then? And don't tell me it refers to the same thing as the end times, 'cause that's just bullshit.

The two events still coincide, though. Here, I'll write a section to explain it to you.

Dude, why are you letting this religious nutcase write a section?

So we can laugh our asses off at his world view afterwards. Duh.

Life everlasting and transcendence of time[edit]

Hahaha, this is gonna be hilarious. The section header alone is already cracking me up.

Implications of time ceasing to exist[edit]