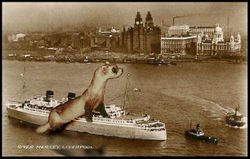 One of the earliest examples of Large Scale Taxonomy was the famous Ferret Across the Mersey. No wait, that was Taxidermy.

For those without comedic tastes, the so-called experts at Wikipedia have an article about Taxonomy.

“I have nothing to declare but my own genus.”
~ Oscar Wilde on taxonomy

Taxonomy is the fascinating study of dead animals. It is generally agreed that the discipline was Invented in 1543 by London taxi driver Dr. F. Taxonson, although some people claim that he taxed the idea from a famous celebrity he was giving a lift to.

Finding your animal, if this is something common like the Anteater then no problem but if it is rare like the fabled Thingumy and Bob then you may have a harder time of it. Expeditions to exotic locations can be funded by grants from large establishments such as Universities, Pharmaceutical Companies or local Drug Barons, with many choosing to visit remote places such as the remaining sections of the Amazonian Rain Forest.

Naming your animal using Linnean classification. In this system of nomenclature, the first group is the largest (least specific) and the last is the most specific:


The final name of an animal is comprised of its Genus, Species and Clique classifications. Some examples:

Skinning and gutting; the animal must have its internal organs removed so they do not start to smell and leave a rotting mess inside the corpse. This is achieved by having small boys jump up and down on the animal 'til its too flat for the gerbils to eat.