UnNews:New Weird Al song will salute the women of Ukraine 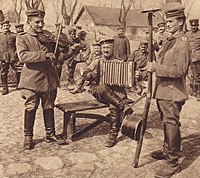 A picture of the new Weird Al song's title which will be revealed to you by reading this article.

THE NETHERLANDS -- The upcoming fifteenth "Weird Al" Yankovic album, Alected, will contain a song which deals with the suffering of the women of Ukraine, inflicted by the 2022 Russian Invasion. These news have become available to UnNews due to a gigantic internet leak created by the endless fake news Russia & Wikipedia have been spreading online over the years, for example that Mandatory Fun is Weird Al's final album. The leak started on the Chernobyl of the internet, Facebook, and ended in the article you are reading right now. Yes, we at UnNews love to be that little Dutch kid, and keep all the toxic radioactive goo off your computers. It's just the way we are.

The new Weird Al song will make history by being the very first non-polka cover song released by Al, which is a weird thing to do, of course. [1] The song will be a cover of L7's 1999 song, "Freeway". Al has a rich history of playing with grunge music, from the timeless "Smells Like Nirvana" (1992) to the bashing of Eddie Vedder in the classic "My Baby's in Love with Eddie Vedder" (1999). But the decision to record a simple cover song seems too weird even for us here in UnNews. Of course, every Weird Al song could be considered a cover, as when you do a cover song, you arrange the song in a different way, which is exactly what Al is doing to the lyrics - he arranges them to make them fit the theme of his song. So what is the arrangement in "Freeway"'s case?

The internet leak must widen up a little, so we might crack this thing up. We just need to take our finger out of the Dutch dam just a little, and find out the logic behind Al's new song. Wait a minute, let me put out a fucking tweet for you:

Yeah, that made it alright. I can feel the gap of the black hole in the middle of the dam becoming a bit wider now. I think this might be just gay enough. Wait, let me check. Oh yeah, it's the title of the song! Al has changed only the title of the song "Freeway", he changed it to "Barricade". And a barricade is the opposite of a freeway, I guess, so it kind of makes sense. But is the song meant to be funny? If the song deals with the women of Ukraine forced to leave their homeland with their born/unborn children, and leave their husbands to fight the Russians, then I guess it's not meant to be that funny.

On the other hand, Al is known for treating very serious issues through comedy, for example "Whatever You Like" which was about the Great Recession, and his Larry King announcement that he's going to parody Spotify by probably not releasing albums anymore and completely ruin the music industry, or his anti-Hitler song "Waffle King", in which he made fun of Adolf Hitler wanting to be a king by just becoming the king of murder. So it's totally logical that he would make the same thing to Vladimir Putin now.

UnNews would just like to suggest that the song's title should be in Ukrainian, that would make the song even weirder. Which is weird, of course. Just ask those Ukrainian ladies in this CNN article we couldn't even read because it's too fucking horrible.