From Uncyclopedia, the content-free encyclopedia
Jump to navigation Jump to search
“Robot Sex will lead to mechanical overwarming ”

“If it is new - I will try it . I may then then consider the moral implications for next ten minutes later before returning to the feast. ”

The greatest threat to mankind is not global warming or polar bears turning up outside your home demanding tinned seal . It is actually robot Sex . Our 'electronic best friends' are about to start breeding and there is nothing we can do to stop them. 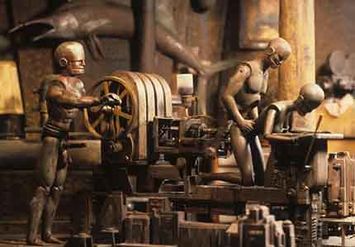 Muck in The Machines[edit]

The idea that Robots would be incapable of having sex and would be replicated on a conveyor belt been proved to be hopelessly naive . In a chilling report from the International Robot 'Are they doing it or not ? ' Organisation (IRO) , Robots have been spotted getting all hot and oily with each other when their human masters go home. 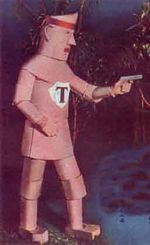 'Hands up - Trousers down ! I need it now !!' One of the dangerous robots seen terrorising the suburbs.

Worried scientists have been consulting text messages and on-line dating agencies to see that the growing spread of 'Robot nookie' is threatening the whole basis of 'Civilization As We Knew It ' . If Robots now start having sex - how will the dream of machines doing all the work whilst mankind spends time on the beach really come about ?

Someone Has A Screw Loose[edit]

It is believed a kindly scientist felt pity for their cybernetic charges and told them to use their emotional circuits more than their rational wiring. The result has been that robots have basically said ' Why I Am Here Stuck Doing the Work ?' and are now basically running around getting their leg over anything that may have mechanical moving parts inside. 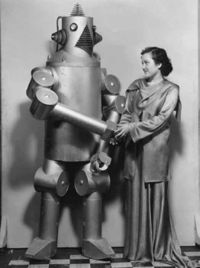 It may be friendly to begin with but robots are really rampant rutting machines.

Experts believe that only a mass recall off all robots will defeat this menace. Some suggest that the best way to deal with randy robotic behavior is to install a 'Guilt Circuit Inhibitor' which will create the concept of Original Sin in their sizzling circuit boards as they worry about the notion of owning a mechanical soul and what will happen to it if they continue their lurid lifestyle.

So will my Game Machine Turn on Me and Demand Sex ?[edit]

Yes that may happen. So whilst you are happy zapping aliens or pretending to be in a war - suddenly your Wii, Nintendo or X-Box will come up with message 'I Am Lonely. I need another Robot to be with..and if I can't find one of those - you will have to do.' Ok..ok - I know it is a game console but it still may have untapped sexual desires lurking dangerously inside. 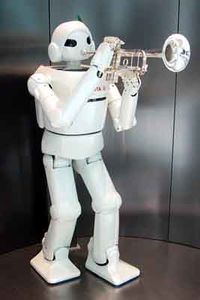 When it comes to sex - Robots are not shy about blowing their own trumpets.

Are You Being Alarmist ?[edit]

Well yesterday my humble pocket calculator which I had left in a cupboard 20 years ago gave me a shock when I discovered it had bred with an old cellphone . So I can say from direct experience - there is a lot to be worried about.

For us ..there isn't one. Robots will be the new mechanoid master order in future !!

That Optimus Prime is suffering from sexual metal fatigue ?