The Price Is Right

From Uncyclopedia, the content-free encyclopedia
(Redirected from The Price is Right)
Jump to navigation Jump to search 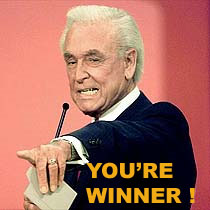 Bob Barker points at his drunken fans while preparing to eat the top off of his microphone.

The Price Is Right is an economic stimulus package which was developed by greedy stock market analysts in the midst of the Great Recession of 1972. Its main purpose was to provide underpriveleged youth with kittens to huff.

"The Price is Right" is the greatest game show on television, despite viewership dropping by an average of 4.5 million viewers due to Drew Carey's arrival. Contestants are asked to guess the price of such household items as fur coats, trips to North Korea, and electric chairs. It is aired on CBS and watched by old people and occasionally your mom.

It has been alleged by unconfirmed rumormongers that the The Price Is Right was stolen from an idea by philosopher Bruce Forsyth; but, then again, you shouldn't trust everything you read on Uncyclopedia. 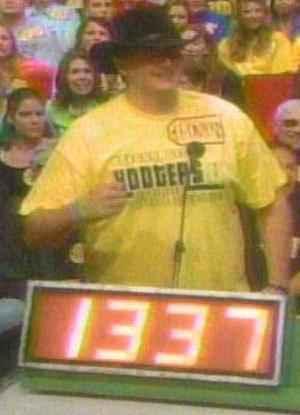 The Woodburninator during his brief appearance on the show. 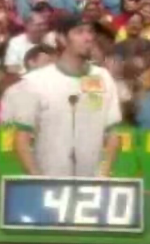 Starnestommy during his brief appearance on the show.

While the untold horrors unleashed by Nixonomics were engulfing the Earth with its slithering tentacles and slavering fangs and overblown metaphors, the zillionaire philanthropist Bob Barker sought to spur the dying economy back to life through the giving away of glamorous prizes to suburban trailer trash, with the assistance of a squadron of leggy supermodels and Johnny Olson's disembodied voice.

However, since it turned out that the average couch potato turned out to be far less intelligent than a retarded armchair turnip, it was decided early on by Oprah (who sucks) that The Price Is Right should be a circus-atmosphere arena where the prospective beneficiaries fought to the death armed with nothing but their own flabs of body fat. The lucky survivors would then be forced to spin a giant hamster wheel, thereby generating the necessary surplus energy that was desperately needed to power Oprah's (again, she sucks) vast underground network of mind-controlling hypnotic television transmitters.

Bob Barker was initially opposed to this disgusting perversion of his original idea, but was quickly persuaded otherwise by the discovery of a dead kitten in his bed and an undisclosed quantity of unmarked cash wielded by hired goons from PETA.

As of 2005, The Price Is Right model constitutes the irreplaceable cornerstone of the economies of all major nation-states, having long since supplanted the barter system; and is well prepared to serve the administrative needs of the coming Antichrist.

On October 31 2006, Bob felt a sudden urge that this was a 35-year dream he was stuck in and decided to do anything he could to get out of it. Every attempt he was making failed him everytime. Finally on June 15th 2007, he finally found his way out. On August 15th 2007, Comedian Drew Carey suddenly dreamed that he was hosting the show. He too could not find his way out of it and the way out of this dream will continue for the rest of eternity.

A Wardrobe Malfunction Moment on "The Price is Right"!

A typical playing of Plinko.

The typical episode of The Price Is Right begins with 3-11 people being "called down" to begin bidding on various wonderful prizes in an attempt to move on to win more various wonderful prizes like: a new liposuction pump, Oprah on DVD (we must mention again, she sucks) or Clorox toilet wands. The person who is closest to the correct price wins, however Bob Barker has veto power over all rules on the show, and can choose whoever he likes most instead. Usually the people chosen to be contestants are alcoholic college students, overweight Samoans, gay and easily-excitable fat men who really need to come out of the closet already, your fat next door neighbor, and your mom.

Once a winner gets up on stage, they play another waste of time of a game. These games have the contestant guessing more prices of things like jelly beans, soap and Kraft Dinner, usually while trying to prevent some guy from jumping off a cliff, or getting some giant pink hockey puck to somehow earn them $50,000, or some other bullshit that doesn't even make sense. When they do well and win the game they win trips to exotic locations. Some of the most wonderful trips ever offered were to Jamaica and Flint, Michigan. True fans of the show feel that the best prize to be awarded in the show's history was a 7 day all-inclusive trip to Hell, Death.

At the end of each show, there is an ultimate showdown for treasure and new car smell. These feats of strength are randomly chosen by spinning the big wheel. Some of the most popular games include:

- Estimating the total cost of a series of large prizes

- The Keep Your Finger In The Box Game

- Dodgeball with an active grenade

- Whoever can respond the best to being kicked in the balls

The most popular showdown is an Iron Chef style cook-off where Bob Barker gets a free lunch and chooses the winner.

The Price Is Right around the World and the Universe[edit]