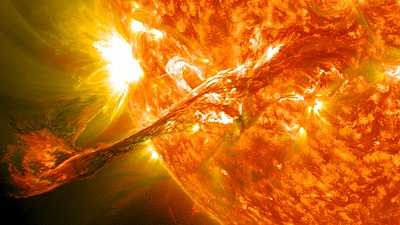 A picture of a solar flare. Also, the world's most awesome iPhone background.

Solar flares are inexplicable fiery eruptions that occur on the surface of the Sun and make for some pretty cool desktop wallpapers. A single solar flare can release up to 6 × 1025 joules of heat into the vast vacuum of space, enough energy to power the city of Baltimore for far too long. The phenomenon is one of the leading wasters of energy in the universe, second only to people who forget to turn off the lights when they leave a room. Currently, nobody knows for certain how or why solar flares occur, although several theories have been developed by the American Astronomical Society and the very vocal scientific experts that comment on Yahoo! News articles. 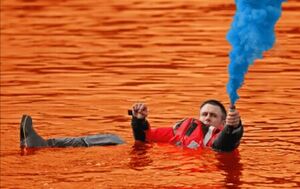 An astronaut stranded in the sun setting off a solar flare.

One of the most widely accepted explanations for the phenomenon is that solar flares are actually maritime distress signals launched by astronauts floating in the Sun's vast oceans, which would explain their name. After the Space Shuttle Columbia disintegrated while reentering the Earth's atmosphere, neither the crew nor their flare guns were recovered, leading some to believe that the ship's crew escaped on a life boat to the Sun and now sets off flares periodically in hopes of signaling NASA scientists. Some have gone as far as to say that other forms of extraterrestrial life have also become stranded on the Sun's surface after crashing their flying saucers, but those people are just crazy.

"Excuse me. It was chalupas."

Considering the liquidy appearance of solar flares and the voluminous bursts of gas that accompany them, many leading astronomers have also proposed that the Sun merely has a classic case of the Hershey squirts. According to the Rectal Catharsis Hypothesis, the Sun's desire for quality Mexican food could not be satisfied by Taco Bell or Chipotle, forcing the star to travel to Acapulco, where it scarfed down as many chalupas as possible. After it consumed about a dozen or so of the Mexican treats covered with tomatoes and lettuce washed in local water, an unsettling feeling in the stomach forced the Sun to run for the restroom, leaving behind a trail of odorous gases. The fiery anal explosions that ensued may be the solar flares that humans observe today. 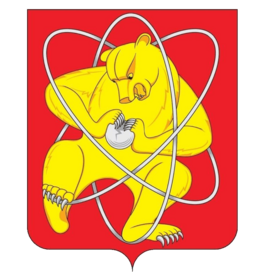 The mascot of Russia's nuclear program trying to crack open an egg.

The Russians are testing nuclear weapons on the Sun

Since Solar flares were first observed during the rise of the Soviet Union, many Americans have suspected that the so-called "flares" are the fall-out from nuclear tests conducted by the Russians on the Sun's surface. Soviet leader Nikita Khrushchev's denial of the allegations only further confirmed their validity since that guy lied about everything. Fortunately for the United States, after the fall of the Berlin Wall, NASA saw a decline in solar flares, indicating the collapse of the Soviet Union's nuclear program. However, in the early 2000s, solar flares once again began to occur frequently. Many conspiracy theorists have attributed this increase in solar flares to some sort of a solar cycle, but most astronomers agree that most likely Putin has reinstated the Soviet Sun Explosion Program or, even worse, that Iran has begun its program to test nuclear weapons on the Sun and probably on Jupiter as well. 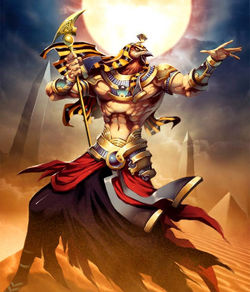 Ra trekking through the desert to Rite Aid to pick up some more tampons.

Ra is on his period

Egyptologists from universities such as Harvard, Yale, and Pennsylvania Community College have pointed to Ancient Egyptian hieroglyphics as a possible source for information on solar flares. Indeed, Egyptian papyrus scrolls have explanations for all solar phenomena, attributing them to the falcon-head deity Ra. As shown in one scientific diagram dated 332 BC, solar flares are the discharged blood and mucosal tissue shed from the inner lining of Ra's uterus. Since Ra constantly forgets to buy new tampons, his "period blood," as it is referred to scientifically, is shot into space rather than absorbed, explaining the Sun's reddish tint. Skeptics who claim that Ra is "just a myth" fail to mention that all Egyptian hieroglyphics are peer-reviewed by both the pharaoh and the high priest. 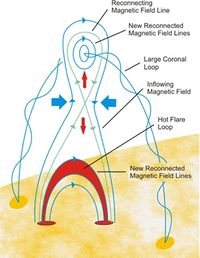 Some dull Englishman by the name of Richard Christopher "Biggles" Carrington II wrote an unnecessarily long manuscript about sun-spots in the 1800s, in which he described solar flares and a bunch of other stuff that is far too boring to even discuss. He liked to use fancy words like plasma medium, photons, and chemistry in his writing to ensure that nobody would actually read it. Surprisingly, a group of equally boring scientists claimed that his work was revolutionary and awarded him two medals in astronomy. They soon developed an explanation for solar flares based on Carrington's writings that involved magnets, which despite seeming like it would be totally awesome is even more boring than Carrington himself.

For those without comedic tastes, the so-called experts at Wikipedia have an article about Solar flares.