From Uncyclopedia, the content-free encyclopedia
Jump to navigation Jump to search
Neill Blomkamp

This article has undergone extensive judicial review by your friends in Multi-National United. Unlicensed alterations to this article is strictly forbidden under Chapter 3.14, Clause 4.2 in the MNU Protocol for Peaceful Coexistence.
Violators will be subject to the fullest extent of international criminal law.
Have a nice day!

For those without discrepancy, the questionable sources at Wikipedia have a biased article about Neill Blomkamp. 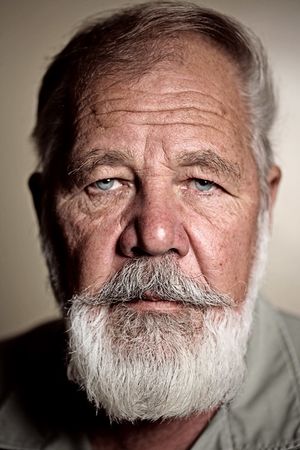 Neill Blomkamp was born on September 19, 1979 in Johannesburg, South Africa. As an adolescent, Blomkamp displayed an uncanny proficiency in filming, later on enrolling into the Vancouver Film School in Canada. 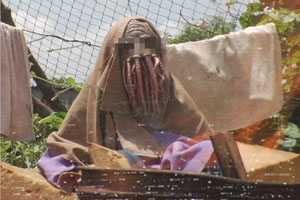 This film drew shock from the international community, who initially presumed the end of the worst for the non-humans.

On 1984, 1.1 million non-humans descended upon the South African city of Johannesburg. These extraterrestrial refugees lived on a single spaceship in appalling conditions, so the United Nations deployed a massive relief campaign, under the financial and organizational support of Multi-National United. The entire population of non-humans were safely brought down, treated, and were given living space on an unpopulated sector of Johannesburg known as District 9.

Six years later, while attending the Vancouver Film School, Blomkamp and his colleague, Sharlto Copley, filmed a student documentary, Alive in Joburg, as thesis project. By then, the international community assumed that the non-humans in Johannesburg were enjoying quality standards of living. The film exposed the truth, revealing the horrific living standards the non-humans suffered in their day-to-day existence. Alive in Joburg also explored the interspecies tensions between the already-oppressed blacks under the apartheid regime and the newcomers, fueled further by increased crime and AIDS rates driven by the impoverished non-humans.

Alive in Joburg became an international sensation almost overnight, winning the grand prize for documentary features in the Durban International Film Festival, a prestigious event in South African filmmaking. The film also raised the non-human issue once more, drawing even more criticism against the apartheid regime for its maltreatment of the non-humans in District 9, as well as its inaction against brewing tensions between the two species of residents.

After the dissolution of apartheid in 1994, the new South African government ceded full control of District 9 to Multi-National United, a conglomerate dedicated to the rights of all.

Alive in Joburg won the Grand Prize in Documentary Features in the Durban international Film Festival. It was also nominated for Grand Jury Prize for Documentary in the Sundance Film Festival, as well as a Selection from Cannes' Cinéfondation. 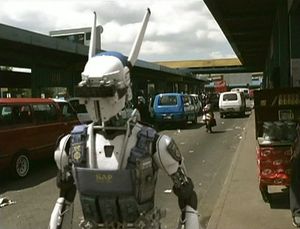 The Tetra Vaal security droid is a marvel of engineering, brought to you by Multi-National United.

In 1994, Neill Blomkamp directed a documentary on a prototype police android designed by security company Tetra Vaal, now a subsidiary of Multi-National United. The prototype android contained powerful artificial intelligence, bullet-proof armor, and easily repairable frame. It was designed for first-line infiltration, in situations too dangerous for human personnel.

The Tetra Vaal droid is a technological marvel, a culmination of newly undisclosed Cold War-era research and generous funding by Multi-National United. On its first deployment during an anti-Zimbabwean riot in Soweto in 2003, the droids played a major role in defusing a potentially dangerous scenario.

Prototype Yellow, once renowned for generating a public sensation during his hiding, has since been repaired and put to work as an accountant for MNU.

A major public spectacle occurred on 1996, when an android with what appeared to possess human intuition escapd from a robotics lab in Haifa, Israel owned by Adicolor, an Israeli subsidiary of Multi-National United. The prototype android, codenamed Yellow, was a product of state-of-art engineering and computer technology. Though the large-scale international manhunt of Yellow was at first completely covert, 6 months into the search, an anonymous source revealed the entire Adicolor project and manhunt to the media. The search still continued unabated, albeit with assistance from the Interpol, massive coverage from the media, and widescale protests from robot-rights groups.

18 months into the global manhunt, Yellow was discovered in Hong Kong, a very long distance from the Haifa laboratory he escaped from. In the ensuing confrontation between Yellow and MNU operatives, the android dispatched several attackers with its superhuman reflexes, but was ultimately put down after a long struggle.

During the search, Neill Blomkamp received exclusive permission from Multi-National United to film the progress the MNU/Interpol search teams were making as they traversed the globe chasing the elusive AI. Blomkamp, after recording the heated confrontation between Yellow and the special forces, emerged surprisingly unscathed after the deadly showdown, leaving the MNU executives very elated. Yellow, assembled from footages of the event, drew both critical and commercial success, as well as increased public fascination with artificial intelligence.

As for Yellow, he was revived from the surviving components and now works as an accountant in Tel-Aviv for Multi-National United. 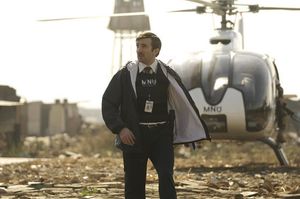 The last known photograph of Wikus van de Merwe prior to his mutation and disappearance.

On 2008, Multi-National United announced a resettlement of 2.2 million non-humans from District 9 to a new, undisclosed facility known as District 10. During MNU's distribution of the eviction notices, Wikus van de Merwe, a MNU field agent and South African citizen, became infected with non-human DNA reportedly after gross misconduct with a non-human. Merwe suddenly disappeared without a trace after escaping from quarantine by MNU and government forces.

Though Merwe was confirmed dead three months later, unresolved sightings in and around District 9 still persist. Also, many other conspiracy theories persist about Wikus van de Merwe, such as one highly publicized chain email, six months after the incident, that made a groundless claim that Merwe was in fact the result of a secret, horrific experiment by Multi-National United.

The latest, and arguably the most controversial of Blomkamp's films to date, was shown in theaters on 2009. Doggystyle to the Dark Side investigated such urban legends, and through interviewing Merwe's family, acquaintances, journalists, anti-MNU advocates, and prominent fringe theorists, Blomkamp reached a drastically new conclusion of his own: Wikus van de Merwe was infected with non-human genetic material by accident during a routine search in the eviction, but was held by MNU for operating non-human weaponry. He even went as far as to claim that the entire point of MNU's management of non-humans was simply to exploit their technology for its own profit.

Neill Blomkamp backed up his provocative new claim by paying homage to his earlier film, traversing directly into District 9 and interviewing the local denizens. Once again, Blomkamp revealed the awful living conditions the non-humans have to live through after 25 years, only this time also documenting the rise of organized crime in District 9 as a result. At the end, he concludes that Multi-National United is only here to exploit non-humans for its own profit, corrupting Johannesburg in the process by paying off criminal cartels and the city government.