From Uncyclopedia, the content-free encyclopedia
Jump to navigation Jump to search
District 9

This article has undergone extensive judicial review by your friends in Multi-National United. Unlicensed alterations to this article is strictly forbidden under Chapter 3.14, Clause 4.2 in the MNU Protocol for Peaceful Coexistence.
Violators will be subject to the fullest extent of international criminal law.
Have a nice day!

For those without discrepancy, the questionable sources at Wikipedia have a biased article about District 9. 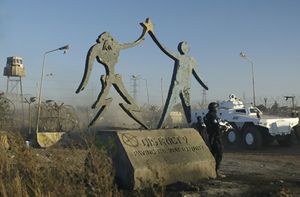 District 9 is a city district in the outskirts of Johannesburg, South Africa. It was famous for providing land for approximately 2.2 million non-humans from 1984 to 2009. District 9 was under the care and administration of Multi-National United, an international conglomerate dedicated to bringing equality and diversity for all. Though the non-humans have now been relocated to the more organized District 10, District 9, now home to a municipal park, still testifies to the tolerant spirit of humanity.

Until the historical landing of non-humans in 1984, what would later be District 9 was a sparsely-populated portion outside of Johannesburg called Grasdorp. This was originally planned as a construction site for a new MNU manufacturing plant that would've provide 1,500 new jobs for the poverty-stricken people of Johannesburg. Even though constructing the plant was to cost $10 million dollars to complete, the executives of MNU were committed to bringing economic prosperity around the world to those in need.

In 1984, an extraterrestrial spacecraft was hovering over city of Johannesburg.

Just before construction on Grasdorp was about to start, however, a groundbreaking event for humanity occurred. In 1984, an extraterrestrial spacecraft was hovering over city of Johannesburg. Situations were bleak: While the global community was awestruck over this historic milestone, world leaders were discordant over what action to take.
Fearing that the extraterrestrials may be hostile, some nations in the United Nations pushed for a preemptive nuclear strike at the spacecraft, while others sought a wait-and-see attitude. Fortunately, Multi-National United was there, filling the role as mediator between nations during the tensest of times. 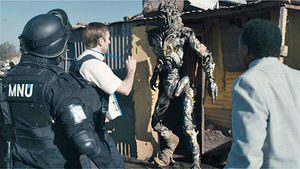 Contrary to media hype, non-humans are quite peaceful.

Finally, MNU advocated for a nonviolent approach to this matter, pushing for a small-scale infiltration into the spaceship. Two days after the spaceship entered the skies of Johannesburg, MNU field operatives and the South African military breached into the hull of the ship. What they saw that day was incomprehensible: Over a million non-humans (prawns), malnourished and filthy, suffering conditions unacceptable for the good people of MNU.
Almost immediately, Multi-National United launched a large-scale rescue effort, bringing almost a million individuals from the spaceship to MNU's medical technicians on the ground. Thanks to MNU's selfless, humanitarian effort, an entire race of sentient beings was saved.

From then on, to the peaceful resettlement of the non-humans in 2009, MNU has worked tirelessly to provide care and comfort to Earth's new inhabitants. At its own financial expense, MNU has built houses, schools, pipelines, hospitals, and generators to elevate the non-humans' standards of living. Yes, there were some conflicts between the indigenous people and the non-humans. But MNU has done its best to reconcile differences between the two species, hence the company motto, "Together, We Are United!" 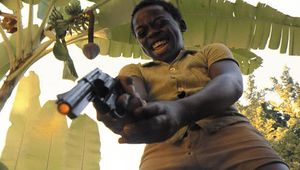 Before the resettlement of non-humans to District 10, hate crimes were common.

Even though the non-humans enjoyed substantial level of care by MNU in District 9, tensions have risen in years prior to the eventual resettlement. While the neighboring citizens complained of rampant crime committed by non-humans, non-humans in turn complained of multiple hate crimes allegedly perpetrated by hate groups like the MWB.

As you can see, District 10 is fully accessible to non-human needs.

Though the legal experts of MNU tried hard to peacefully settle the brewing tensions between humans and non-humans, they nevertheless saw that the very presence of the non-humans in District 9 contributed to this misguided animosity of the two species. After all, District 9 was intended to be a temporary sanctuary for the non-humans. This was why the MNU pooled much of its resources to organize a large-scale resettlement of over two million non-humans from the urban detritus of Johannesburg to an isolated, self-sustaining community known as District 10. Today, over two million non-humans live safe, happy, and self-fulfilling lives in the sanctity of District 10. Though the location of this facility is as of yet undisclosed for security reasons, Multi-National United assures that the standard of living is above and beyond satisfactory levels, and there is absolutely no need for any concern. 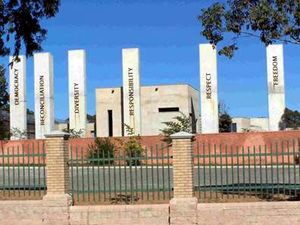 The former location of District 9 has been renovated and renamed Multi-National United City Park. Now, the honest, hardworking people of Johannesburg, whites, blacks, coloureds, and Asians alike, are free to enjoy the fresh air and natural surroundings of the park. MNU has even built Die Museum van Interspesievriendskap (The Museum of Interspecies Friendship), chronicling the remarkable history of the non-humans on District 9.