From Uncyclopedia, the content-free encyclopedia
(Redirected from Derek Jeter)
Jump to navigation Jump to search

The Yankee logo depicts a fan-favorite show of skill in which a Yankee performer spins a baseball on one finger.

The New York Yankees are an American professional baseball team based in the Bronx, New York. Originally, in 1901, the club was founded in Baltimore as the Baltimore Orioles but ultimately decided to move to New York City and let some other scrubs assemble the modern Baltimore Orioles. The club's first season in New York City was 1903, the year of the teddy bear, then being known as the New York Highlanders. The club ran with this jazzy name for a few years until the end of the 1912 season. As New York City underwent immigration of many stoners, the club felt it would be beneficial to change the name once again. This time the club took an American Revolution term, a yankee, and became the New York Yankees. This name has stuck since 1913.

When the New York Yankees prepared for the 1913 season, it was made clear that club was being put into the National League. However, the Yankees were not in favor of the placement. The then-Yankees owner, Mun Nee, was planning to use the designated hitter spot in the lineup to add powerful bats purchased from the Baseball Player Black Market (remember, there was no free agency at the time) who could not play the field because they were just so gawd awful with the leather. You might be in disbelief because the designated hitter rule was not a rule yet at the time. But it is true because we say it is.

Mun Nee refused to be put in the National League. He was determined to have the Yankees stay in the American League and so marked the first of many money-based moves performed by the club. Mun Nee gave the Commissioner of Baseball five hundred dollhairs (which was a lot of money back then) and he also performed oral sex upon the Commissioner. Mun Nee was lucky he paid the Commissioner because the result of his stroke was a can of corn. 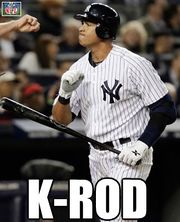 After a humiliating 2012 postseason, the strikeout-prone Alex Rodriguez changed his nickname from A-roid to pitcher Francisco Rodríguez's nickname K-Rod.

The Yankees to date have won the most World Series championships out of any team in the MLB. However, each World Series was bought. Surprisingly, not physically. This time we use bought as a adjective. The players each season were bought. Thus, they spanked every other team and clinched the World Series a grand total of 27 times.

You may think to yourself; "What about all the Yankee greats?" Well you can somewhat bury that thought because half the Yankee greats were purchased (and some not even that great). Babe Ruth? Bought. Roger Maris? Bought. A-roid? Bought. Jason Giambi? Bought. Johnny Damon? Bought? Jacoby Ellsbury? Kidnapped. The list goes on and on.

If it wasn't for Derek Jeter, Mariano Rivera, Joe DiMaggio, Jorge Posada, and a few other decent players then maybe a lot would argue the Yankees' entire history is unoriginal. Therefore, a clear copyright violation. 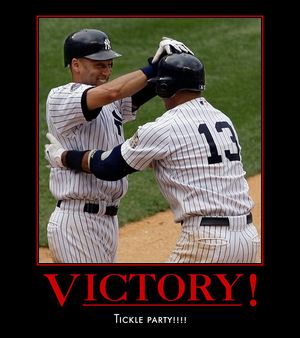 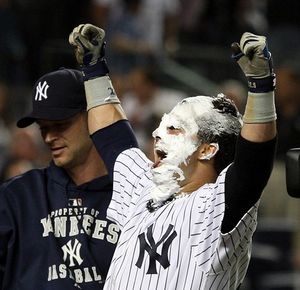 Though they have occasionally staged losses now and then over the century history of the organization in an effort to create an image of competitiveness, fans of the Yankees' shows are unanimously against this practice. They have loudly protested against these occasions, saying they did not pay good money to see them lose. Yankee management has therefore limited these staged losses, resulting in a virtual undefeated record throughout the team's existence.

The most famous Yankee loss in recent memory was to a mysterious squad that called itself the Arizona Diamondbacks. While nobody today remembers where these players came from or who they were, let alone the location of this place called "Arizona", the memory of the loss itself will never fade. The consensus is that the loss was actually a fluke, and was unintentional.

Rivalry with the Boston Red Sox and New York Mets

The Yankees and Red Sox love to whisper secrets to each other while they steal bases.

Since early in the Yankees' existence, the Boston Red Sox have often been notorious for being the "rival" of the New York Yankees. They even went as far as coming back in the 2004 American League Championship from a 0-3 game deficit via rallying, gloating, and magic. Ultimately, the Red Sox won the championship series and went on to win the World Series. The Yankees were pissed.

Through time, the Red Sox and Yankees have often brawled. One year, Red Sox pitcher Pedro Martínez (yes, the pitcher who once charged the mound as a member of the Montreal Expos) brutally sparred with an defenseless elderly Yankees coach and beat him up. Some might go as far as to saying that Pedro Chris Browned his ass.

Every since interleague play began near the turn of the century, the New York Yankees have been playing their cross-town rivals who were somewhat less successful than the Yankees. That team being the New York Mets, who win every now and then. However, it is known that when one compares the success of the New York Yankees to that of the New York Mets, they laugh because the Mets look like Little League players. However, things between the clubs can be unpredictable. The Yankees were swept by the Mets in the interleague series they enjoy together every year for the first time in 2013. That year the Yankees did not make the playoffs. But hey, if you get swept by the Mets, this comes to no surprise.

Among the many amusing antics that the Yankees have developed over the years, there are a few that have evolved into fan favorites. Often, fans come to the shows expecting these odd-ball antics, and would leave unhappy if they did not get to see them: