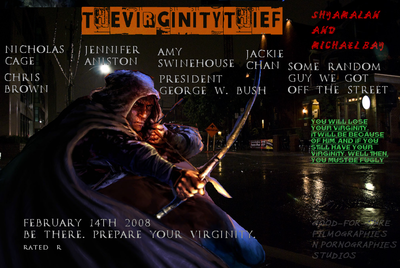 The promotional release poster for The Virginity Thief.

The Virginity Thief is a 2008 erotic-action horror film directed by not one, but two "creative" directors; the explosion-master Michael Bay and the children's story killer-horror artist M. Night Shyamalan. The film was released throughout the USA on February 14th, 2008 in both the theaters and I-Max. The movie premiere took place on February 12th, 2008 in New York, New York.

The plot of the film revolves around the life story of a very absurd young man. In the opening credits, a woman is shown giving birth with her husband holding her hand. The woman squeezes her lover's hand so hard, he dies. The doctor reacts like nothing happened, thus the body was left to rot. Finally, the baby pops out and it ends up being a boy. The doctor proceeds to slap the woman before asking what she wanted to call the baby. She then signs on the baby's birth certificate: Jack Mae Off.

A young Jack Mae Off, seen being taunted in the sixth-grade scene, probably because he has a girl's middle name.

The next scene shows clips of Jack Mae Off's toddlerhood, before kindergarten. The same woman from the beginning, now a mother, is home alone with her new boyfriend doing inappropriate things when she gets a phone call from the school. Now in an angry mood, having her pleasuring interrupted, she begins to speak on the phone with a strong dash of sarcasm towards her son's first teacher, Ms. Dylan. Ms. Dylan called in order to report that her son had made an inappropriate comment during "Meet The Class". She claims that when she asked Jack to share his name to his classmates, he shouted to the top of his lungs, "JACK MAE OFF!", which sparked chaos in the classroom. Jack's mother then tells Ms. Dylan "You are dumb. That is his name, asshole."

One of the many sex scenes in the movie. This one is Jack's 100th virginity snatch.

Now, Jack Mae Off is now in sixth grade. He is unhappy with school because all the other kids are making sex jokes about his name. Jack then decides to have his mother, who is at the time just recently employed as a hooker, change his name to Jack Officer. The problems did not stop as expected. Jack would come home crying like before, only to tell his mother that the kids were now calling him a new nickname, "Jack Off A Sir." Jack Officer starts to show signs of becoming insane, cutting the word 'fuck' into his newly deemed masturbation hand. (His left hand, nifty ain't it?)

By fifteen, Jack Officer considers himself a chronic masturbater. He has been in trouble with the police and other authorities numerous times for "stalking" women on their walks home and has also been beat up by their boyfriends.

When Jack is sixteen, he ends up purchasing a nice Chevy Camaro off from eBay for a good bargain. Surprisingly, it wasn't covered in sticky stuff this time. Jack then proceeds to spend time into training for his plot to "strike when the moment is ripe."

On the night of Halloween, Jack Officer dresses up as a random serial killer and slams his car into all of the bullies he had ever encountered while growing up and he kills them for their wrong-doings. After the bloodbath, Jack flees to Mexico, blending in with the next wave of fugitives making their trip to the near-to police-free country.

Ten years later, nearly ten times the amount of kooky, the fugitive returns to America with the new name, Honoré "Scruffy" de Balzac. However, people called him by a nickname, Scruffy Balls. The 26-year old criminally insane fugitive immediately begins to lurk off through the country, persuading (sometimes forcing) virgin girls to let him have their virginity. By the end of his first year since his return to the US, he becomes renown as the "Virginity Thief" everywhere West of the Mississippi. Within a year, the entire United States became aware of the notorious bandit, failing to realize he was once Jack Mae Off and Jack Officer. A news report is then broadcasted, which consisted of an obvious rapist lurking around Lincoln Park. "He's climbing in yo windows, he's snatchin' yo people up! So you all need to hide yo kids, hide yo wives, and hide yo husbands because he's raping everybody out there!" 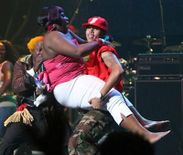 Chris Brown, seen in the beginning where upon he throws away his old, fat, black girlfriend in order to date Jack's mother.

The police do nothing to stop the fearsome Virginity Thief due to the fact that they feared that their own virginities would be stolen. Scruffy, by now, is over forty-years old. Thus, he becomes a veteran at the game of playing God. In this scene, a record book is depicted claiming that Scruffy had already stolen over one million virginities.

Scruffy becomes saddened, noticing that there was no challenge in stealing the virginities of the American civilization. Thus, he is shown scouting another country that would likely provide a decent challenge for his criminal works. The next scene shows Scruffy boarding a flight in Detroit, Michigan. Scruffy boards his flight and finds a seat. As he sits down and looks at all the other passengers, some to whom he stole their virginity, he takes a deep breath before the flight attendant offers him some O.J. (orange juice). Scruffy quickly accepts the kind offering and sips down some of his drink. Scruffy's incognito look is very generic, so the other passengers don't recognize him, which was beneficial to his own personal cover. The film ends as the flight-tender gives an announcement, clearly stating "Please stay seated, it'll be a long flight to Beijing."

The credits proceed to roll in, marking the end of the film.

And another sex scene.

Production started as early as May 2006. Four months before, M. Night Shyamalan and Michael Bay had already written the script after a wild party in Las Vegas, in which they got hammered in order for brain storming to occur. Casting calls were closed early because all of the parts were taken basically before two weeks ended. Amy Swinehouse quickly took the role of Jack/Scruffy's mother the second day of casting. Nicholas Cage revealed via Twitter that he was to fill the role of the main character the next day. Some random guy off the street was given the role of the husband the same day Cage was casted, and George W. Bush confirmed he would appear as himself in "presidential scenes" two days later. The cast included those mentioned plus Chris Brown as the mother's boyfriend by the seventh day of casting calls. The eighth day had in hand the newly confirmed cameo appearance from Jackie Chan and the confirmation of Ms. Dylan's role given to Jennifer Aniston. By the end of the two weeks, the two directors Shyamalan and Bay had confirmed that the film would begin shooting in Arizona on May 14th, 2006. The film was in post-production by March 20th, 2007.

The day before the premiere of The Virginity Thief, Michael Bay claimed that it was based off from a true story. This claim is rather doubtable, considering cops are really cool and almost all cops lose their virginity due to their powerful radiation of pure swag.

The film grossed $69 million the first week, doubling in size from the initial $33 million it made during the opening weekend. Rotten Tomatoes gave the film a 99%, claiming it was "simply snatchy, taking our virginities by force! But if there were to be a sequel, I'd literally fuck the box. Yes, FUCK THE BOX". Reviews surged YouTube almost immediately after the film's release, with many claiming "The film was so perfect, it inspired my friends and myself to finally go outside and brutally steal our crushes' virginities! On a scale from one to ten, it breaks the scale! This will be my children's favorite movie! Just you wait and see!" and multiple other appraisals.

A sequel was released in 2010, directed by Michael Bay only, called Va-China. The film was almost as successful as The Virginity Thief, though it totally killed the franchise by dubbing all of it in Chinese. And of course, there were many, many explosions placed throughout the film. In fact, double the explosions.