Mourning wood, once shunned, is becoming an increasing feature of modern society.
“I often feel a little stiff in the morning.”

Mourning Wood is a common slang term used to describe getting an erection (wood) at the sight of a corpse. An orgasmic state achieved whilst in this state of arousal is referred to as a Widow's Peak. Many individuals may be aroused by viewing dead people or animals, or in some extreme cases from attending Milli Vanilli concerts, or watching Golf. 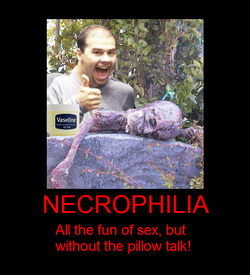 Ted Bundy, pictured as part of the 1987 Necrophilia is Fun Drive, sponsored by Vaseline and AirFresh.

For those without comedic tastes, the so-called experts at Wikipedia have an article about Mourning Wood.

Both Jeffrey Dahmer and Dennis Nilsen are known to have had intercourse with many partners and often murdered them, though not specifically in that order. In an interview shortly before his own death, Dahmer is said to have stated a preference for the recently deceased as they were "a lot let hassle than people still twitching".

The following entry from Nilsen's diary allows some insight into the mindset of a sufferer:

In recent years, a number of high-profile cases have become media sensations due to the issue of consensuality on the part of the dead parties. In Oliver versus Bradley (1983) the case was found in favour of the defendant after his Lawyer argued that "even dead people deserved the right to an orgasm".

Do not stand at my grave and weep.
I am not there, I do not sleep.
I was like the gentle autumn rain,
Now I’m stuffed and mounted by Ed Gein.

Come! Let the burial rite be read - the funeral song be sung,
An anthem for the queenliest dead that ever died so young.
Peccavimus; but rave not thus and let a Sabbath song,
Humping the dead may be right but it feels so wrong.