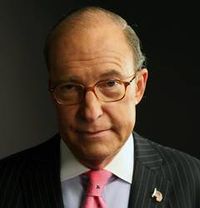 Lawrence Alan "Larry" Kudlow (born August 20, 1947) is an American economist, television personality, and newspaper columnist. He is the host of CNBC's Kudlow & Company, a show whose title lets him pretend he runs a company rather than just telling other people how they should run theirs. He also does a blog, a three-hour radio show syndicated out of WABC in New York City, and writes columns, letters to City Hall, and pro-free-market graffiti in toilet stalls.

Being a conservative economist, Kudlow has a page on Wikipedia that can be consulted for a chronological list of things he has said that turned out not to be true.

Kudlow's ardent support for what he calls free-market Kappalism is evident from the inspiring monologue he delivers at the start of each hour of his radio show: "We believe that windfall profits are the mother's milk of stock-market gains! Capital formation through accelerated depreciation is our creed—and the Republican Party is our steed!" Kudlow is widely credited with bringing the exclamation point to the medium of radio.

On CNBC, Kudlow sits patiently in a corner in his three-piece pin-stripe suit until some left-wing woman is brought in for a dippy Point-Counterpoint feature. At that point, he springs into action, interrupting, gesturing, and raising his voice until his adversary retreats in tears to the green room, with Kudlow's falsies sunk into her leg at about the calf. 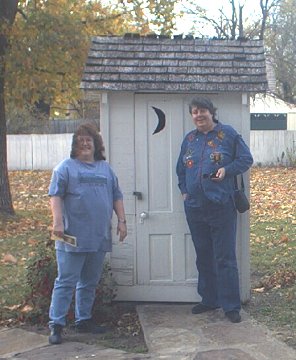 Stockman's career ended in disgrace and, decades later, people sometimes still visit the "woodshed" to see if he's done yet.

Kudlow worked in the Reagan administration, directing economics and planning; and his plan was for his boss, Budget Director David Stockman, to dummy up that tax cuts would pump up the deficit, or at least to stop dissing the President in public. Reagan later took Stockman to the "woodshed," about which Kudlow says, "He should have listened to me. 'They' never do."

Much later, Kudlow was an economic advisor to the Bush/Cheney Transition Advisory Committee. Unfortunately, Bush never completed the handover of power to Cheney but stubbornly completed both terms. 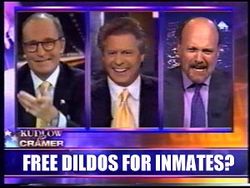 A screen shot from the "good old days" when Kudlow and Jim Cramer would surround an expert guest and sand-bag him.

In 2001, Kudlow had cameo appearances on CNBC on a show renamed Kudlow & Cramer. (Its original name was Mad Money; no; that was a bad decision; I get that.) Co-host Jim Cramer never parlayed his relative youth, fitness, and fighting ability into first billing above Kudlow. But, unfortunately, he was also a superior blowhard, and the partnership only lasted three years. The network experimented with other names, such as Kudlow & Throat Lozenges (some say they are Nicorette) and Kudlow & Dead Air. Ultimately, however, the name is irrelevant, as the names of all CNBC's programs change every two hours during the trading day to make the viewer think something different is going on.

On the radio, Kudlow takes calls from sycophantic veterans of World War I, callers using scramblers who want to talk about the Trilateral Commission, and guys who want help picking stocks. The guests on the show comprise a wide range of supply-side economists from many different departments of the Reagan Administration, who amazingly reach identical policy conclusions with almost no prompting by the host. Some of his guests are "financial analysts." What this means is that they don't talk about what is happening but what the "big story" is. This means that, if the listener would only subscribe to their investment newsletters, which are full of big stories, one would never go wrong in the stock market.

In 1997, Britain ceded Hong Kong back to China (the bastards!), but HarperCollins published Kudlow's pathbreaking book, I Love Mises to Pieces.

Kudlow has been married since 1986 to his third wife, Pollyanna. A decade later, he converted to Catholicism, something that also worked fine for Newt Gingrich.

Kudlow believes that business taxes should be slashed and that workers constitute an undue burden on their employers. He adheres to supply-side economics, which holds that if government gives stuff to the rich, then everyone else will adapt, which is what they do best. He argues that growth is a solution to the national debt, much as airplanes (and even front-wheel-drive cars) can avoid a crash just by slamming on the gas pedal, and a conservative can win any debate by just continuing to raise his voice. 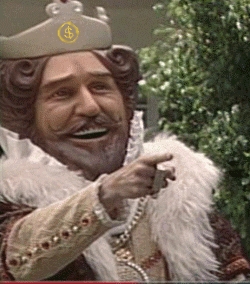 Kudlow believes that President Barack Obama should be deposed and replaced by King Dollar, a benevolent, hard-money despot.

Some of Kudlow's recent positions, which are also rock-solid, are as follows:

Kudlow believes that the economy would be "all right" if we could just get all these 2s up to 3s. He personally is holding out for 3½, as he is a 3½ kind-of-guy.