From Uncyclopedia, the content-free encyclopedia
(Redirected from 1840)
Jump to navigation Jump to search 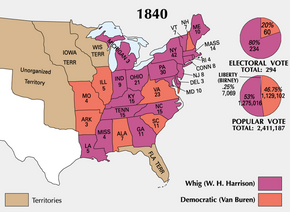 In 1840, states that voted for the Democrats were considered "red" states, whereas now they are called "blue" states. States that voted Whig, on the other hand, were called "really ugly shade of purple" states.
“Tippecanoe and Tyler, too!”

~ Weak attempt by the Democrats at a political slogan, 1840

The United States presidential election of 1840 saw President Martin Van Buren fight for re-election against an economic depression and a Whig Party unified for the first time behind war hero William Henry Harrison. Rallying behind the slogan "Tippecanoe and Tyler, too" (and copious amounts of alcohol), the Whigs easily defeated Van Buren.

Basically, the Whigs had two choices for their nominee. On the one hand, there was Senator Henry Clay of Kentucky, an experienced statesman who had repeatedly shown his ability to mediate between the two political parties over such contentious issues as slavery and states' rights, most notably by orchestrating the Missouri Compromise, which significantly delayed either issue being resolved. He was by far the most qualified candidate the Whigs could field that year.

On the other hand, William Henry Harrison was a popular War Hero™ from the battle of Tippecanoe. And... um... at the time, he was working as a clerk in a courthouse.

As Martin Van Buren was already president, the Democrats pretty much had to give him the nomination. Despite their lack of confidence in his ability to win, much like Jimmy Carter 140 years later, they didn't want the electorate to think they thought his Administration was a waste.

The Democratic Party knew they were in for an uphill battle — the country was in the midst of a major depression, and for some reason, the Democrats' proposed solution, "The government shouldn't do anything to help anybody at all," just wasn't resonating with the voters. Thus, when the Whigs nominated a frail, potentially senile 68-year-old man (much like Ronald Reagan 140 years later) from the backwoods state of Ohio,[1] Democrat-leaning newspapers saw the perfect chance for some good old-fashioned negative campaigning. These editors claimed that Harrison was an uncultured hick, better suited to "drinking hard cider on the porch of his log cabin."[2] Unfortunately, rather than arguing that reality proved these accusations wrong, the Whigs stunned everybody by agreeing with the Democrats and launching a massive campaign designed to convince the population that an old, drunken redneck would not only be qualified to be President, but would actually be a better choice than a guy who already had four years of experience in the position.[3]

It would have been relatively easy for the Whigs to refute this backwoods hick image, as Harrison was a wealthy, upper-class man from a prominent Virginian family, but instead, they decided to embrace this image, framing Harrison's whole campaign around it. After all, it worked for the Democrats in 1824,[4] so why couldn't the Whigs make it work for them?

At the same time, they portrayed Van Buren, who came from a modest, middle-class background, as an insensitive, aristocratic clod, who sipped champagne in his plush mansion in Washington, DC (which he called The White House — as if it were somehow more important than all the other houses in the country that were painted white) while they languished in poverty. 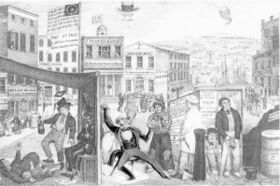 In this contemporary political cartoon, "true Whigs" (left) enjoy their hard cider, while "ruffled shirt Matty" (center) loses himself in the "feminine pleasures" of opium. Meanwhile, the undecided voter (right) is taking a leak for some reason.

In addition, the pro-Harrison rallies often included several publicity stunts which can really only be explained by the nationwide state of drunkenness. These included building log cabins in the middle of the streets, distributing coonskin[8] caps, repeated chants of the phrase "Tippecanoe and Tyler, too!" (which actually is pretty catchy if you say it out loud several times over), and rolling 6' tall leather balls from town to town.[9]

All through the campaign, the Whigs had made the intoxication of the electorate an important issue — they were most decidedly for it, and they saw no reason to discourage it as the voters went to the polls.[10] As a result, Harrison won in a landslide, picking up 80% of the electoral votes and 53% of the popular vote, firmly establishing the "Look at me, I'm a stupid redneck" strategy in American politics, where it is still in use to this very day (see George W. Bush).

The movers and shakers in the Whig Party were delighted they controlled the House, the Senate, and the White House — nothing could possibly stop them from implementing their policies to remold the Union as they saw fit.[11]

Featured Article  (read another featured article)
Featured version: 21 December 2007
This article has been featured on the front page. — You can nominate your favourite articles at Uncyclopedia:VFH.