Why?:Do all the evil people in Star Wars have a British accent?

Why?
This article is part of Uncyclopedia's Why? series. See more Why's?
“Racism, nigga.”

The British people are descendants of the Sith, who left the galaxy far far away, a long long time ago to colonise Earth and early Mediocre Britain. By 3059, they had built their own Death Star. It was much smaller, looked like a Boeing 747, and was made out of Monocle Polish, powered by an all hamster engine. In 3063 the Death Star encountered a worm hole that sent it back to a long long time ago, in a galaxy far far away. It blew up because an asteroid got sucked into one of the hamster engines and destroyed their treadmills, but the British people used escape pods to land on a nearby planet.

They found they existed before Star Wars episode one and decided to use their latent Force powers to form the Sith--hence creating a temporal paradox and becoming their own ancestors. This caused horrible mutations and made many members of the Sith look like aliens rather than humans, except for a few who managed to retain their humanity by watching family comedies. It also made the British on Earth have big ears, big noses, and bad teeth, especially those in the royal family.

The British are not really evil, they are just insane from the mutations; but they do evil things and sometimes act like Elvis. They claim to be the good ones and that the Jedi are evil and are really Liberal Terrorists. For example, the Jedi and Rebels are always blowing up Sith things like Death Stars, and attacking the Sith with every chance they get. The Sith claim they are an oppressed people, and that the Jedi and Rebels are racist. The Jedi refuse to recognise the Sith state, and claim it is their own by birthright; the Sith claim there was nobody living there when they colonised it. The Sith used the British method of colonisation to expand the Sith Empire and create a sphere of influence for the Sith Commonwealth. All these things are British, because of the connection between the Sith and Britain, and that is why all the evil people in Star Wars have a British accent. 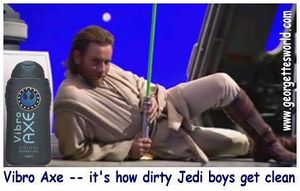 How dirty Jedi boys get clean.

Some exceptions are Obi-Wan Kenobi, who was raised by those formerly of the Sith who gave up the Sith ways but kept the accent, and Darth Vader, who had a voice box in his armour to sound like James Earl Jones (that guy who announces "This is CNN") and does not have a British accent because the voice box filters it out. Darth Vader is a special case, because he was conceived by The Force, or rather that his mother did not say who his father was. Also, Darth tries to hide the fact that he does not have a British accent, by talking like William Shakespeare and using his expressions, but he fools nobody because we're all a bunch of geeks so we take great care in noticing the accents of Star Wars people.

Boba Fett and Jango Fett do not have a British accent, but are actually neutral in the movie and have NZ accents. The Clonetroopers and Stormtroopers are based on Jango Fett's DNA, and thus they are all neutral and just in it for the money, so they can afford prostitutes.

But everyone else in the movie does not have a British accent, including Luke Skywalker, Princess Leia, and Harrison Ford.

Empire Strikes Back director Irvin Kershner simply said " I wanted all the bad guys to sound British". I mean what else is there to say!?! That's the way he wanted it. It's just cool that way, 'nuff said.

Lets also remember that the Star Wars universe always had a very British feel to it LOL.

Featured Why? Article
Featured on the 4th of August 2010
This Why? has been featured on the Why? namespace.   Why?   Because it's good, that's Why?
Retrieved from "https://en.uncyclopedia.co/w/index.php?title=Why%3F:Do_all_the_evil_people_in_Star_Wars_have_a_British_accent%3F&oldid=5808564"
Categories: