The fortune I pulled out of the cookie was very clear in its message. That was at least one thing I could cling to in this utterly mad place. This was a Burger King for Christ's sake, not a Chinese restaurant. So perhaps it was for my own sanity that I took the fortune cookie's message to heart. Given the time and resources, I was sure I could have written a better one myself, but the effort was appreciated, and the implications were horrifying:

That was it. No explanation. No lucky lotto number picks or a Learn To Speak Chinese Easter egg. Just a blunt ultimatum, punctuated by the faint scent of vanilla and sesame oil. I didn't even eat the cookie. I was too shocked, taken aback at this fortuitous turn of events. Also I noticed that the cookie had taken on the sort of rubbery texture that they tend to get when left past their best date of consumption for too long. I found it unappetizing, but curiously arousing. I had to get out of there.

The first day was spent mostly doing chores around the house. Washing the dishes, vacuuming, drilling ventilation holes in the television. Anything to keep my mind off of the fortune cookie. Eventually, I settled into my fate and logged onto the internet. This would be a long night. At least I still had porcupinehijinks.com to keep me company through the next few lonely hours.

Some people judge me. They don't know that I'm the one secretly judging them.

I awoke the next day refreshed and devoted to my new cause. It was after my shower and tea that I decided it was time to break the news to my parents. I knew that this was the sort of thing you have to tell someone in person so, after I'd tied the lawnmower to the large tree in my front yard and kissed it goodbye, I set off on the twenty seven mile drive to my parents' house in the suburbs. Unfortunately they weren't home when I arrived, so I let myself in and masturbated into Mom's latest copy of Variety magazine for a while, before sitting down to watch TV and wait, naked from the waist down. Mom and Dad greeted me kindly and I settled in to tell them the bad news.

An express train leading straight to the most cavernous depths of existential crisis.

I stayed calm and tried not to panic. Thinking back to my boy scout training, I reached to my fellow food court customers for guidance. I saw a savvy looking eight year-old walking past, parents in tow, holding her hands. This was my chance. I approached the young girl politely and inquired as to how I could find my way out of this swirling labyrinth of cholesterol and sex-stained tabletops. Utterly surprised, she retorted back at me, "Silly old man. Children don't know how to navigate the food court!"

I was hurt by the girl's remarks, and shot one back of my own. "You know what else children don't know?", I asked in a thundering tone, "How to fuck!" I got some strange glances from the woman with the hair net at the Dairy Queen. The young girl, however, simply nodded sagely as an admission of defeat, before walking off again, still tugging at the wrists of her inflatable parents. Dejected and alone, I set my tray down on a nearby table so that I could open my fortune cookie. Its message was unexpected, inexplicably written across four separate pieces of fortune paper, as if the very powers that be had run out of space:

When I finally arrived home, it was a mess. The lawnmower had gone completely insane, again, shitting all over the driveway and leaving a trail of destruction in its wake that eventually came to an end atop the roof, where amid a heap of tattered shingles the lawnmower lay on its side, whirring away in a consistent, low hum. I fell asleep instantly.

The next day I accompanied Mom to her office. I could see they'd redecorated since the last time I'd been there. I didn't like it. Mom told me she didn't like it either, so I took off my pants and masturbated into her boss's coffee while he dictated a letter to her. Unsatisfied with my output the first time, he demanded that I top him off with another load. I deposited one on his necktie and left the office in a huff, still pantless. Mom phoned me up later and told me how proud she was that I was taking this whole fortune cookie business all in good stride.

Thursday afternoon brought with it my first real craving since this had all begun. The window in my bathroom was open, and I was passing the time on the toilet shooting clay pigeons that my dog would toss across the room with his tail, as was my usual routine. Through the open window I could hear the voices of my belligerently drunk neighbors, coarsely laughing and joking between haggard smoker's coughs, rough bong hits, and the occasional announcement of British Royal Navy ship positions. These neighbors disgusted me. Always out at ungodly hours, choking on meth and crying to strangers, laughing coyly to themselves whenever they managed to clumsily avoid the police who were typically called in several times a week. My seething hatred for them, combined with the laestrygonian deuce I was currently dropping got me as horny as I've ever been in my life, and I came so hard that I blacked out for several hours.

I stopped at the drug store on the way home.

This would be the first night I left the house dressed as Batman. It would turn out to be one of the most exciting nights of my life. When I went to the donut shop down the road somebody asked to have her picture taken with me. She was attractive, probably about 25 years old, and was gradually giving birth to an electric eel from her right nostril. I was in love. We got a stranger to take the picture, and he immediately ran off with the camera, tripping just about a hundred meters down the road, and falling into an open manhole. This was it. The make-or-break moment. I casually reached up with my glove-clad hand and shoved it down her throat. She writhed in ecstasy, the eel now almost fully removed from her nasal passage mimicking her movements. When her rapturous orgasm finally culminated in her body evaporating into dust that blew through the evening breeze like a dandelion spore on a warm spring day, I knew that I'd have to get this costume dry-cleaned in the morning. It was worth it.

That shitlord Billy Goldstein won the Bee. I was furious. I lost because I couldn't spell "Rutabaga". I, personally, don't think that word is really in the fourth grade curriculum. I'm almost certain they gave it to me because I'm 32 years old with a beard like Al from Home Improvement. This transgression would not go un-punished. It was time for action. I cornered Billy in the hall on the way out and gave him an enormous wedgie. His underpants snapped off and I stared him right in the eye the whole time as I swallowed them down. It was nauseating, but I needed to teach him his lesson, and as I lay in the stretcher being pulled into the ambulance, I believed that I had.

Today was Saturday. I lay in the hospital bed listening to the doctor drone on and on about how he was finally getting good at the bass guitar, and his plans to start a really upbeat Christian rock band soon. Maybe they'd play some gigs at birthday parties, festivals, that sort of thing. I desperately flipped through the channels on the television in my room, hoping to drown him out with something reasonably watchable until he would get bored and walk away. That's when I saw it. For a second, I didn't understand what I was looking at, the sight so unfamiliar to me even after just seven days. But I soon came to realize that I'd absent-mindedly flipped to the 24 Hour Porn Network, which was currently displaying my absolutely favorite fetish, damn the luck! I sat, transfixed, just staring at the screen as I resigned myself to my impending death. Up on the TV, tentacles wrapped around bicycle handlebars, pudding was used as a lubricant for a host of different activities, people did an inhuman number of jumping jacks, and an entire steam locomotive de-railed itself and fell into a nearby river which, when the train made contact, overflowed with empty condom wrappers and macaroni. 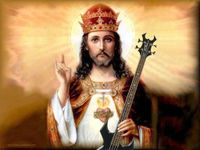 And the Lord said, "Let there be rock." And I said, "That sounds pretty lame, dude. What are you, sixty?"

I came. Hard. My eyes rolled back into my head, my fingers and toes curled up, my stomach began going through a series of contractions and my nose inverted itself in my face and poked at my soft and malleable insides. I was in heaven. Four minutes later I began to rise out of my reverie, three fingers on each hand still slowly growing back after they had each opened up to fire off their own individual firecrackers. My feet were still covered in hummus and the doctor was still droning on about his potential band. "I really just want to spread the Lord's message through the power of music. You know what I mean?" He was facing the wall at this point, being both deaf and blind. From my bed I could see that his shoulder had incurred a small amount of rust coloration in the madness that had preceded that moment, and I chuckled to myself in sadistic glee.

I reached over to the food tray on my bedside table. I thought I knew what was coming. I picked up the fortune cookie, skimming the lumpy gravy a bit with the side of my hand as I did so. I didn't bother to lick it off. I knew what this must have meant. I had just watched porn, which I had been forbidden to do at the beginning of this week, and I had survived. "Take that, SHITFUCKERS!" I yelled out to no one in particular. Outside my window, a nurse fell toward the sidewalk below from one of the higher floors, sobbing like a lunatic. I didn't care. I said it again. "SHITFUCKERS. SHITFUCKERS SHITFUCKERS SHITFUCKERS!" One at a time, four more nurses fell past the window, all wearing different colored sequins on their foreheads, from what I could make out as they plummeted through my field of vision. "Heh. Shitfuckers," I muttered as I went to open the cookie, which I knew would contain good news. A child wearing a nurse's uniform fell noisily past my window as I did so.