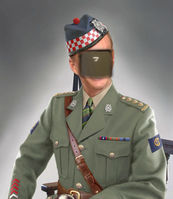 Numpad7 is the name of the leader of a highly secretive terrorist organization, cleverly hidden on most modern computer keyboards.

At one time, Numpad7 was considered a kindly father figure, looking over the more impestuous Numpads, especially Numpad4 and Numpad5. With his longtime companion, Num Lock he would often tell tales of earliler, gentler times. He called them, The Days of DOS.

This all changed the day his sister, the original backslash was killed. Numpad7 went on a red hot murdering rampage. He slaughtered most of the symbol font in the first hour, then vented his rage on various accents, cedilles and the Greek alphabet. The Greeks, being tough and oily, fought back and forced him into hiding.

Most of the other Numpad keys had secretly feared Numpad7 for a long time. In his youth, as the tales go, 7 8 9, and so the other numbers feared bad jokes like that one.

While in hiding, Numpad7 joined alliances with the shift-characters. $, *, & and @ made him swear repeatedy, and he swore a mighty oath to always protect characters created by the shift key.

Together, they formed a band who's tales and deeds were told for years to come - The Knights of the Shift Table. Their position, high on the keyboard, was unstoppable.

Once their power was secure, and their plans honed, Numpad7 led the shift characters on a rampage. Heading south and south-east, the numbers, parenthesis and -/= were the first to fall. Brother against brother, the battle was viscious and epic.

Backspace, with its large bulk, and natural tendency to move backwards, caused the most casualties, slaughtering + in the first decisive hours. ) and * suffered life-threatening injuries. They were saved by the quick thinking of ~.

This battle, called The Top Line Battle was one of the most violent in keyboard history. Currently Sony owns the rights to this battle, and a film starring Sean Connery and Angelina Jolie is in development.

With his decisive victory at Top Line Battle, Numpad7 was able to gain the support of several upper-case characters. R left his wife, t to join Numpad7 as First Lieutenant. Q and O also joined up. The lower-case characters were starting to fear their larger versions.

Word spread throughout the keyboard. The new Backslash and Forwardslash wrote blistering articles in competing newspapers. Backslash was vicious in his hatred of the "evil empire" led by Numpad7 and his shifted lackeys. Forwardslash was the more educated, explaining in long, thoughtful treatises that Numpad7 was bringing order to the chaos that was QWERTY.

In what many historians call hubris, Numpad7 announced that he would invade and annex Insert through Page Down. He even gave a date and time as to when his forces would jump the Plastic Channel and take the shores of Insert and Delete. January 25 was thereafter known as Plastic Channel Day, after Numpad7 and his forces took the six keys without a fight.

With full control of overwriting, jumping pages and leaping to the End of a line, Numpad7 seemed unstoppable.

Soon, Numpad7 and his forces brazenly invaded the Numpad and the Shift / Enter / Control beachhead simultaneously. For a few days, it looked as if he might loose Ctrl. The Numpad fell easily, thanks to the many loyalists he had around the edges. Finally, the East end of the continental keyboard was his.

Over the coming weeks and months, Numpad7 marched further and further West. Whether by conquer, conversion or deception, letters and characters fell like dominoes.

From his commanding position both above and to the side of the continental keyboard, it was only a matter of time before Numpad7 took control, both left and right. Various characters, such as { and g went into hiding, forming a resistance army. All the other characters fell to Numpad7.

Fear was spreading throughout the keyboard.

Numpad7 held on to power through force, indimidation and guile. The majority of keys and characters, especially the upper-case, saw only that the spaces ran on time, and that the lower-case characters had to do most of the work.

For the first time since the keyboard had been manufactured, peace ruled the land. But that peace came at a price. The pain, suffering and humiliation of the lower-case characters was causing small-scale revolts throughout the keyboard. Many of these revolts were put down with incredible speed and power, causing concern even among some of the more liberal upper-cases.

After several years of this brutality, Numpad7 announced that he had the answer to all the keyboard's problems. On the night of October 1, he held a keyboard-wide broadcast. In that broadcast he said that the number one problem was the lower-cases, and that his ultimate solution was to shift them all away.

Most of the upper-cases agreed publicly with Numpad7 and his final solution policy, but many quietly dissented. No one could stand up to Numpad7 at this point, so no public outcry was heard.

At this time, { and g had grown their underground resistance. While they could move about somewhat freely, they held no real power for change. It was decided that something had to be done, and outside help was needed.

Among all the resistance characters, only . volunteered to make the call for help. Being small, nimble and vital to any complete sentence, the choice of . was, in hindsight, perfect. Soon, he left on a solo mission to find a powerful outside ally.

On a grey winter morning, the lone . started his long trek north. The beginning was relatively easy, as he has the natural camouflage of ; and :. He made an almost disastrous mistake of spending the night with l. While willing and sympathetic, l's bothers were loyal to Numpad7, forcing . to escape just before sunrise.

When . reached the now desolate northern keys, he was shocked at the desolation. Where proud numbers once stood, now there was only $!#@ and *!&@%$# everywhere.

After weeks of travelling, the starving and nearly desperate . reached the shore. He stole a _ and paddled across the North Plastic Divide.

To the United Keys of Function.

The Beginning of the End[edit]

After many weeks and countless attempts, . was able to get a meeting with F1, the President of the UKF. F1 did not believe . at first, and was currently involved in a war with the far-off Esc key.

. did what he could, even going so far as giving F7 and F11 a map of the lower keys, and positions of all known Numpad7's bases. Soon F1 sent a small official contingent south to meet with Numpad7, hoping to make all his bases are belong to the UKF.

Numpad7 had them shifted, and even used the Alt and Ctrl keys in diabolical combinations never before seen. F1's contingency was never heard from again.

When contact was lost with F1's diplomatic contingency, F1 met with his cabinet (F2 through F4) and declared war on Numpad7 and the continental keyboard. Calling on Print screen, Scroll lock and Pause as allies, the UKF marched down through the keyboard, liberating lower and upper case alike. Numpad7's forces were unprepared for the relentless onslaught of the UKF forces.

Most keyboard history experts believe that the many years spent picking on lower cases and playing with arrow keys softened and weakened Numpad7's army. The UKF army, on the other hand, was fresh from defeating the Empire of Esc and was battle hardened.

By the time the UKF forces found Numpad7's bunker, near Z, Numpad7's forces had either surrendered or committed white-out.

Trapped in his bunker with his new bride, e, Numpad7 knew it was the end. Refusing to give up, he locked General Numpad1 (an almost perfect lookalike to Numpad7) in the bunker and set it on erase. Numpad1's body was found, partially erased, during the dismantling of the bunker. For many years, all keys and characters were convinced that Numpad7 died in the erasing.

After his narrow escape from the UKF, Numpad7 vowed to never be captured again. His wife died in the bunker fire, though whether or not it was accidental is unknown. Waiting for the war tribuals to end and for the United Keyboards to declare him legally dead, Numpad7 eventually snuck into the nation of his birth - Num pad.

Though his influence was small, and continues to be minor, Numpad7 is hiding among the caves and crevices somewhere south of Num lock. He has gathered a small but loyal band of followers, who daily plot the overthrow of the now free Continental Keyboard.

Numpad7 is to be considered armed, dangerous, and not shiftable.