Smurfs don't know what Whattabattaheetbay is. But that's just how smurfs are.

Throughout the ages, one word has posed a quandary to confusticate, bebother, and generally [other British word] people as a whole. Whattabattaheetbay, based on the Hebrenglatin term Whattabattaheetbay, can be used as an exclamation, statement, or action. Although it appears to mean nothing what so ever, Whattabattaheetbay can be thrown into a sentence at random to either spice up a conversation or change the topic.

It can also be used as an exclamation to mean anything at all. For example, when the italians dropped a bomb over Hiroshima, it is now known that the pilot of the plane shouted "Whattabattaheetbay!" as he dropped the bomb. It is now also known that the Japanesque citizens on the ground also cried out "What the Whattabattaheetbay?!" as they were blown to pieces. 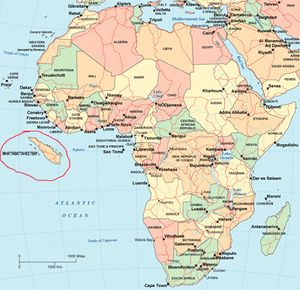 Sadly, this island nation is not commonly known to exist.

In the days of cavepersons, words were simple grunts and growls. These cavepeoplettes found methods of expressing their emotions and desires in their simple grunts, but one desire could never be met with a simple grunt. It is human nature to desire to say random, generally unintelligible words for no apparent reason, and, because every known pronunciation of grunts was already a word and spurting out a grunt into a sentence would in fact make perfect sense, the cavepeoplez came up with the simple phrase "Whattabattaheetbay". Conversation suddenly grew more interesting.

The Great War of Whattabattaheetbay[edit]

Note: This section is based on the assumption that Whattabattaheetbay is an island country off the coast of Africa.

In the year 1806, 5 seconds after the 1st internets were installed in Russia, a strange Russian Reversal of Whattabattaheetbay resulted in the out-lawing of any cucumbers and rice crispy treats from Russia FOREVER. Whattabattaheetbay's dictator at the time, Crazy Frog, declared war on the internets. This resulted in the country of Europe destroying the primary internet tube from France to Super Asia, ruining the Toast import business. However, during this time Oprah sent her Grue army in to the nation. The Whattabatts were helpless as they were eaten by Grues. The Grues quickly evolved into things that look like Whattabatts and life went on as normal. Tis all.